Animal health authorities in Canada and the U.S. are watching for spread of highly pathogenic avian influenza after infections in both countries.

As of Jan. 18, the cases were limited to two noncommercial farms and two wild birds in Newfoundland as well as three wild birds in the Carolinas. All of the birds were infected with an H5N1 influenza strain.

The Canadian Food Inspection Agency announced in December and January that infections had been found starting in mid-December on the Avalon Peninsula of Newfoundland. A Jan. 13 report from the World Organisation for Animal Health (OIE) indicates about 440 birds had either died of the disease or been killed on the two farms to control its spread.

Two wild gulls on the same peninsula also were positive for the H5N1 strain, the report states, and Canadian authorities were continuing surveillance among wild birds and poultry.

The U.S. Department of Agriculture reported Jan. 17 to the OIE that an American wigeon killed by a hunter Dec. 30, 2021, in South Carolina was positive for an HPAI strain. On Jan. 18, APHIS officials announced testing had also revealed infections in a northern shoveler in North Carolina and a blue-winged teal in South Carolina.

Veterinary students and veterinarians interested in international work may not know people who are involved in that kind of work. A new website hopes to bridge that gap.

The Global Veterinary Career Profiles website from the University of California-Davis School of Veterinary Medicine highlights veterinarians working abroad and offers advice for those who want to pursue this work.

The site features interviews with several veterinarians working for organizations including the Bill and Melinda Gates Foundation and the U.S. Agency for International Development to advance the health of animals, the public, and the environment.

Common themes reported by interviewees were the role of mentors, international jobs and travel, and research experiences.

The AVMA policy “Opportunities for Engagement of U.S. Veterinarians in International Programs” states that the Association “actively encourages programs to expand opportunities for, and improve the education and training of, United States veterinarians to be of greater service and utilization in other countries of the world.”

Learn more about what fellow veterinarians are up to abroad.

The American Veterinary Medical History Society has published a handbook of philosophical considerations for veterinary students and early-career veterinarians, “Guideposts for Veterinary Professionals.”

“Guideposts is intended to be inspirational as well as aspirational and to demonstrate the value of embracing the rich history of the veterinary medical profession and the humanities,” according to the AVMHS website. “Although the handbook was developed primarily to support veterinary students and recent graduates, the timeless advice and words of wisdom contained within may benefit veterinarians at any stage in their careers.”

The book is divided into sections—”The Way of Veterinary Medicine,” “A Veterinary Education and Career,” “Veterinary-Client-Patient Relationship,” “A Balanced Life,” and “Character”—each of which has several chapters written by prominent veterinarians, former deans, and other educators. 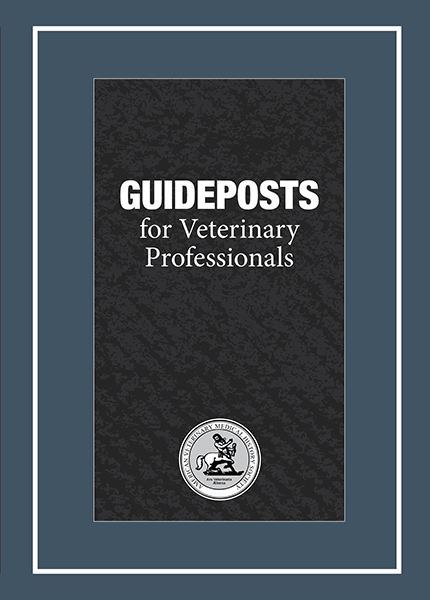 Copies of “Guideposts for Veterinary Professionals” were presented for free to students at U.S. and Canadian veterinary colleges during their annual white coat ceremonies or other special events last year, with Merck Animal Health covering the cost of production.

More information about the book, including how to order copies, is available at the AVMHS website.

An equestrian with enthusiasm for dressage plans to donate her 52-acre sport horse facility to the University of California-Davis School of Veterinary Medicine.

The facility, Templeton Farms, is near California’s central coast and about a four-hour drive south of the veterinary school. Equestrian Gina Bornino Miller and her late husband, William J. Miller, opened it in 2011 as a “world-class sport horse training, sales and breeding facility,” and Bornino Miller is now donating the property to her alma mater, according to a UC-Davis announcement.

Bornino Miller said in the announcement that she anticipates seeing the facility help advance equine health and veterinary education. Dr. Carrie Finno, director of the veterinary school’s Center for Equine Health, said the donation will support the future of equine veterinary medicine.

“Templeton Farms is a spectacular property with a reputation for excellence and we are committed to providing top-quality care to boarders while enhancing our research and educational efforts to improve horse health and performance,” she said.

The university announcement indicates details on the timing of the donation were forthcoming.