Wild and captive white-tailed deer in Iowa, separated by hundreds of miles, tested positive for SARS-CoV-2 RNA, a finding that “strongly suggests” the occurrence of multiple human-to-animal spillover events and deer-to-deer transmission, according to new research.

The discovery indicates SARS-CoV-2 will likely remain in the environment after the pandemic recedes, spreading among white-tailed deer populations common throughout North and Central America.

“This has profound implications for the trajectory of the pandemic,” said Dr. Suresh Kuchipudi, lead author of the study published Nov. 6, 2021, in the online non–peer-reviewed pre-print server bioRxiv. 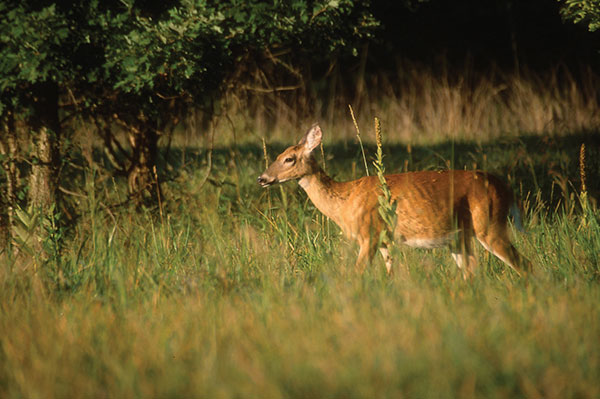 While there is no evidence that white-tailed deer are spreading SARS-CoV-2 to humans or other animals, Dr. Kuchipudi worries that, with enough time, that could be a possibility.

“The direct threat isn’t from eating infected deer,” explained Dr. Kuchipudi, a professor of emerging infectious diseases at Pennsylvania State University and associate director of the university’s Animal Diagnostic Laboratory. “The threat is deer could serve as a reservoir for a virus that could conceivably mutate into a novel variant capable of leaping to other species, including humans.”

The study builds on earlier research by the U.S. Department of Agriculture that found SARS-CoV-2 antibodies in 40% of 152 samples from wild white-tailed deer in Illinois, Michigan, New York, and Pennsylvania. Initially published online in July 2021, the study was republished in the Nov. 23, 2021, Proceedings of the National Academy of Sciences.

The study authors don’t know how the deer were exposed to the coronavirus, and they speculate transmission could have occurred through people, the environment, or another animal species. The authors go on to say the results emphasize the need for continued and expanded wildlife surveillance to determine the significance of SARS-CoV-2 in free-ranging deer.

“We also recommend SARS-CoV-2 surveillance of susceptible predators and scavengers that interact with deer. Future wildlife surveillance should be designed to detect, isolate, and genetically characterize SARS-CoV-2 and to identify potential variants, as well as other endemic coronaviruses. These methods are needed to shed light on how zoonotic pathogen spillback into novel wildlife reservoirs may affect pathogen adaptation, evolution, and transmission.”

There are no reports of deer infected with SARS-CoV-2 showing signs of illness, according to the USDA.

Several animal species have been experimentally infected with SARS-CoV-2, and some animals can be naturally infected through contact with infected people, including pet cats and dogs, captive large cats, and farmed mink. And although there were early reports out of Europe of rare transmission of SARS-CoV-2 from farmed mink to farmworkers, particularly prior to initiating strict on-farm biosecurity measures, the Centers for Disease Control and Prevention says the risk of animal-to-human transmission is low.

Dr. Kuchipudi and his colleagues believe their research shows humans are, in fact, spreading the virus to deer. They tested 283 retropharyngeal lymph node samples collected by the Iowa Department of Natural Resources from 151 free-living and 132 captive deer in Iowa from April through December 2020 for the presence of SARS-CoV-2 RNA.

They discovered that one-third of the sampled deer had SARS-CoV-2 nucleic acid in their lymph nodes. Genomic sequencing revealed the coronavirus genomes represented multiple lineages that corresponded to viral genotypes circulating among humans at the same time. The authors say that, in the aggregate, the results are consistent with a model of multiple independent human-to-deer transmission events and deer-to-deer transmission.

“Our findings raise the possibility of reverse zoonoses, especially in exurban areas with high deer density,” Dr. Kuchipudi said. “The study also highlights the potential risks and considerable knowledge gaps associated with the continued evolution of SARS-CoV-2 in animal hosts and calls for the implementation of enhanced surveillance programs to identify potential reservoir species at the animal-human interface.”