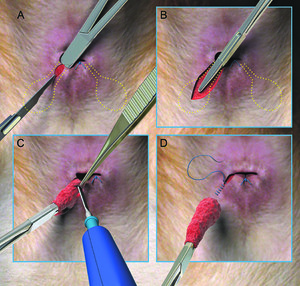 Data collected from the medical records included signalment and examination findings at the time of surgery, results of any preoperative laboratory analyses, and results of diagnostic imaging or other diagnostic tests (eg, fine-needle aspiration) if applicable. The anesthesia and surgery records were reviewed, and details of the surgical procedure, including concurrent procedures that were performed and any complications that developed during surgery were recorded. Surgery time was recorded from the time of the initial incision to completion of skin closure. Perioperative and postoperative antimicrobial administration and adjuvant treatments (chemotherapy or radiation therapy) were noted. Postoperative complications, histologic examination findings for excised tissues, development of local disease recurrence and any treatments pursued, date of last follow-up, and date and cause of death or reason for euthanasia were annotated if applicable.

All dogs received ampicillin-sulbactam (30 mg/kg, IV) once at induction and every 90 minutes during surgery. Fifteen of the 16 dogs were prescribed amoxicillin–clavulanic acid (13.75 mg/kg, PO, q 12 h) at the time of hospital discharge as part of surgical prophylaxis; the length of antimicrobial treatment ranged from 5 to 14 days.

None of the dogs had intraoperative complications (all were assigned a grade of 0) during the procedure. One dog developed a grade 1 postoperative complication of paraparesis, which was suspected to be secondary to epidural analgesic administration, acute noncompressive nucleus pulposus extrusion, or fibrocartilaginous embolism. Advanced imaging was recommended but declined by the owner. This dog was monitored in the hospital for 2 days and had a physical therapy session on the second day before being discharged. At the 2-week follow-up examination, the paraparesis was documented as markedly improved, and the paraparesis was documented as resolved at the next follow-up examination 4 months after surgery. All dogs were doing well with no reported concerns at the time of incision recheck examination 10 to 14 days after surgery.

At the time of case accrual, 8 dogs had been euthanized, and 7 dogs were alive. One dog was lost to follow-up with the referral veterinarian 459 days after surgery, and owner contact attempts were unsuccessful. Two of the 8 dogs were euthanized because of disease progression: one had local recurrence, and the other had systemic disease. The other 6 dogs were euthanized because of disease processes unrelated to AGASCA. Two of the 16 dogs in the study had confirmed or suspected local recurrence; the duration of local disease control was 290 and 203 days, respectively. The median duration of follow-up was 286 days postoperatively (range, 67 to 777).

Another dog had suspected local recurrence but the mass did not undergo cytologic examination or biopsy. The mass for which the dog had undergone surgery was 4 cm in diameter, and histologic analysis revealed a high-grade AGASCA with a mitotic index of 27/10 hpf. This dog underwent abdominal ultrasonography 68 days after surgery, and the results revealed left internal iliac lymphadenopathy. Fine-needle aspiration was performed, and cytologic findings were consistent with granulomatous inflammation but neoplasia could not be ruled out. Thoracic radiographs obtained at that time did not show metastatic disease. Repeated abdominal ultrasonography 131 days after surgery revealed progressive lymphadenopathy with the addition of right sublumbar lymphadenopathy. The lymph nodes could not be safely sampled with ultrasound guidance, and thoracic radiographs did not show evidence of metastatic disease. On physical examination 203 days after surgery, there was frank blood present with rectal wall deformation strongly suggestive of local disease recurrence. Because of the severity of clinical signs (dyschezia and anorexia), the dog was euthanized. No additional diagnostic tests were performed.

There are several potential advantages of the technique described in the present report. The use of the clamped hemostats on the duct allows for controlled manipulation of the tissue during dissection. Notably, this allows traction to be placed on the tissue to be excised, with minimal manipulation of the immediate adjacent soft tissue. The use of mosquito hemostats allows for this technique to be performed in patients of various sizes. It is possible that clinicians may experience challenges related to use of the hemostats in smaller dogs and cats. However, the use of smaller hemostats could aid in placement in these patients.

The focus of the present study was the description of a modification of a surgical technique and the short-term outcomes of dogs that underwent the procedure. Several limitations precluded further conclusions from being drawn, including the retrospective design, small number of cases, and variations in disease burden and management. The disease stage of the dogs prior to surgery varied widely, and adjuvant treatment was pursued in some but not all cases. These factors certainly could have affected the results in the study sample. The lack of longer-term follow-up also could have influenced the detected rate of local disease recurrence. Many clients and referring veterinarians were contacted for follow-up; however, because long-term disease monitoring was at the discretion of the owner, recurrence could have been undetected in some patients.