Postmortem images of the liver (A) and stomach contents (B) of a 14-month-old 1.63-kg castrated male rabbit (Oryctolagus cuniculus) that died shortly after being found collapsed and unresponsive. A—The liver is severely enlarged, friable, and dark red to yellow with a prominent lobular pattern. B—The stomach content consists of numerous, metallic light-brown wire fragments (0.1-cm-long fragments), and white and green plastic parts embedded in green to brown semi-digested food.

Postmortem images of the liver (A) and stomach contents (B) of a 14-month-old 1.63-kg castrated male rabbit (Oryctolagus cuniculus) that died shortly after being found collapsed and unresponsive. A—The liver is severely enlarged, friable, and dark red to yellow with a prominent lobular pattern. B—The stomach content consists of numerous, metallic light-brown wire fragments (0.1-cm-long fragments), and white and green plastic parts embedded in green to brown semi-digested food. 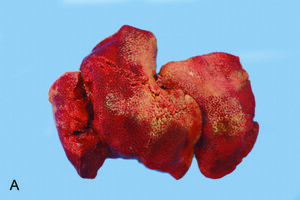 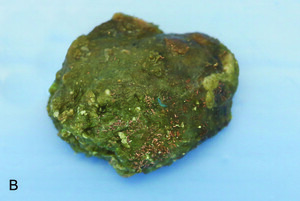 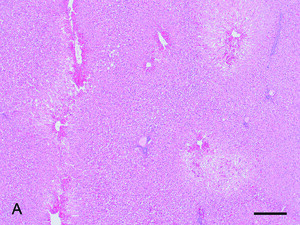 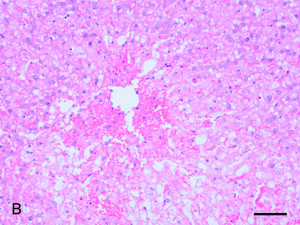 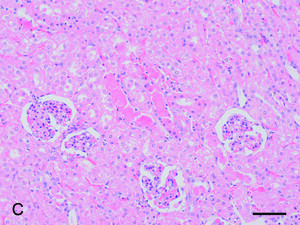 A 14-month-old 1.63-kg castrated male rabbit (Oryctolagus cuniculus), collapsed and unresponsive, was found by the owner in December. The animal died en route to the Pet Emergency Hospital, Dublin.

A postmortem examination was performed at the School of Veterinary Medicine, University College Dublin. The rabbit was obese, with ample subcutaneous and visceral fat deposits (body condition score, 5/5). The mucous membranes were pale pink, and throughout the carcass, the blood was pale red and watery. The liver was enlarged, friable, and mottled yellow and light to dark red with a marked lobular pattern (Figure 1). The spleen was contracted. The kidneys were pale brown and no urine was present in the urinary bladder. Notably, the stomach contained large amounts of metallic, light-red to brown fragments of wire (0.1-cm-long fragments), and white and green plastic parts admixed with green to brown semi-digested food.

In the kidneys, there were multifocal tubular changes, including vacuolated cytoplasm and loss of cellular detail (degeneration), fragmented or pyknotic nuclei (necrosis), tubular dilation with flattened tubular epithelium, and intraluminal protein casts (in both medulla and cortex).

Toxicological examination detected a copper concentration of 124,120 ppm on a wet-weight basis within stomach contents, 174 ppm in the kidney, and 21 ppm in the liver.

This is a unique case description of peracute copper toxicosis in a rabbit in which copper concentration reached up to 124,120 ppm (stomach contents). Toxic copper concentrations for rabbits have not yet been fully determined. Puls1 suggested an adequate liver copper concentration in rabbits to be between 8 and 50 ppm, whereas concentrations < 3 ppm are considered deficient and > 690 ppm are toxic. For comparison, toxic copper concentrations in sheep, another species highly susceptible to copper intoxication, range from 250 to 1,000 ppm in the liver,1 whereas in less susceptible species, such as dogs and goats, toxic concentrations range from 400 to 3,000 ppm and 230 to 2,054 ppm respectively.1 An excessive plasma concentration of copper inhibits glucose-6-phosphatase and glutathione reductase, which are both essential enzymes for erythrocytes to resist oxidative stress.2 Their inhibition mediates free-radical production, resulting in lipid peroxidation of erythrocyte membranes (hemolysis).2–4 Other mechanisms of copper-induced hemolysis are the formation of methemoglobin and Heinz bodies.3

For the rabbit in this report, hemolysis would have been so rapid and marked—observed postmortem as watery, red-tinged fluid instead of blood—that it would have led to severe hypoxia in all vital tissues and death of the animal. Hypoxia resulted in tubular degeneration of the kidneys, and periacinar necrosis and hydropic degeneration of the liver—the classic hypoxic zonal pattern of hepatic necrosis. Based on hepatic blood flow,4 the liver can be subdivided into individual acini that consist of 3 zones. Oxygen and nutrient-rich blood enters the liver at zone 1, which encompasses hepatocytes around the portal tract (center of the acinus). As blood flow continues through the acinus, it passes through the midzone (zone 2) toward hepatocytes surrounding the hepatic venule (periphery of the acinus, zone 3). Although the gradient of oxygen decreases toward the hepatic venule, the relative metabolic activity (ie, enzyme activity, including cytochrome P450) increases in the hepatocytes toward the periacinar zone, making zone 3 not only the most susceptible zone to hypoxia, but also to toxic insults.4 However, in this case, an additional copper-mediated toxic injury to the liver is considered unlikely given the low hepatic copper concentration compared to the suggested toxic concentrations mentioned earlier.1,5,6 The yellow discoloration of the liver and the presence of small, empty vacuoles in hepatocytes in this case were the result of fat accumulation (hepatic lipidosis).4 This is commonly seen in obese rabbits, as in this case, and was not considered a substantial contributor to the death of this animal. The presence of copper in the stomach, combined with its absence within the intestines, highlighted the peracute onset of toxicosis in this case. Other postmortem findings typical for hemolytic crisis, such as jaundice, anemia, hemoglobinuria, and dark-red discoloration of the kidneys (as a result of hemoglobin staining), were not observed. The high copper concentration in the stomach content (124,120 ppm) and the relatively low concentrations in the liver (21 ppm) and the kidneys (174 ppm) were consistent with a single fatal exposure to copper, in which the period of exposure was too short to allow for accumulation within any tissue. The morphology of the foreign material within the stomach (green plastic and copper wires) and the season (pre-Christmas) suggested Christmas lighting as the likely source of copper. Rabbits are commonly observed to chew on wires and other foreign material, and thus potential exposure to harmful or toxic material should be considered a possible risk when dealing with this species. This rabbit was dead upon arrival, but rapid treatment in less severe cases is strongly encouraged.

To our knowledge, this was the first reported case of peracute copper toxicosis in a rabbit. There are few reports on chronic copper intoxication in rabbits5–7; in these reports, the term “chronic” is used to describe the duration of copper exposure rather than the clinical (acute) presentation, as in both studies the rabbits survived only a couple of days after the onset of clinical signs. One study5 assessed affected rabbits, with signs including lethargy, weakness, death, hepatocellular injury, and acute intravascular hemolysis, and showed that the detected hepatic copper concentrations in those rabbits ranged from 532 to 1,250 ppm (wet-weight basis). Another study6 showed that even lower hepatic copper concentrations (eg, 319 ppm [wet-weight basis]), when associated with additional stress factors (eg, pregnancy, transport, food change), can lead to a chronic copper toxicosis similar to that described in sheep. Both studies reported long-term exposure to high copper-containing food as the source of copper; one was the result of an inadequate mixture of pellets,5 and rabbits had access to high-performance food in the other study.6 Rabbit diets with increased copper concentrations are recommended for fur production and for breeding does.8

Copper is an important trace element necessary for a variety of biophysiologic processes, such as mitochondrial respiration, antioxidant defense, and neurotransmitter biosynthesis.4,6 Copper deficiency in domestic animals is reported far less frequently than copper toxicosis. The latter can occur either by increased intake or impaired metabolism, which leads to chronic or acute copper accumulation. Susceptibility to copper accumulation and intoxication varies among species, with sheep being the most susceptible because of a reduced capacity for biliary excretion of copper.4 Nevertheless, copper poisoning can also occur in dogs (with severe copper accumulation in chronic hepatitis and only occasionally hemolytic crisis), cattle, and pigs (only with an abnormally high copper intake).4

Through this case presentation, we emphasize that pet rabbits are among the highly susceptible species for copper intoxication and that practitioners should consider this as an important differential diagnosis for acute depressive and hemolytic events in rabbits, especially after potential ingestion of foreign material.