Photograph of an 8-year-old sexually intact Maltese dog with a 3-cm-diameter, semi-firm, bright-red, ulcerated mass affecting almost the entire left side of the vulva.

Photomicrographs of a fine-needle aspirate from the mass (A) and histologic sections of the mass (B–D). A—The fine-needle aspirate consisted of large numbers of round neoplastic cells with an eccentric nucleus, coarsely stippled chromatin, a conspicuous nucleolus, and discrete intracytoplasmic vacuoles. Anisokaryosis was mild to moderate, and binucleated cells were occasionally seen (arrowhead). A few scant, degenerated RBCs and inflammatory cells were also present. Romanowski stain; bar = 5 µm. B—On histologic examination, round neoplastic cells were arranged in sheets and supported by a delicate fibrovascular stroma. Neoplastic cells had dense chromatin, a single nucleolus, and a moderate amount of eosinophilic, slightly granular cytoplasm. A few lymphocytes and neutrophils had infiltrated the neoplasm. H&E stain; bar = 20 µm. Neoplastic cells had strong cytoplasmic immunoreactivity to lysozyme (C) and CD45 (D). H&E stain; bar = 10 µm. 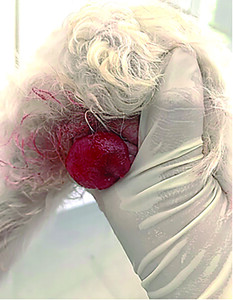 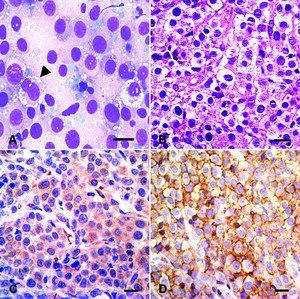 An 8-year-old 3.6-kg sexually intact female Maltese dog was referred to the Veterinary Hospital of São Paulo State University with a 5-day history of a 3-cm-diameter, semi-firm, bright-red, ulcerated mass affecting almost the entire left side of the vulva (Figure 1). One month before the evaluation, the dog had had outdoor access. The dog had an up-to-date annual vaccination status, and no previous history of illness was reported. However, the dog had never received any anthelmintic treatments. A moderate number of ticks (Rhipicephalus sanguineus) was observed.

Cytologic examination of a fine-needle aspirate of the vulvar mass revealed a mildly cellular sample infiltrated with large round cells containing a moderate amount of pale-blue cytoplasm with multiple coarse, clear vacuoles and an eccentric, hyperchromatic nucleus with a single prominent nucleolus (Figure 2). Anisokaryosis was mild to moderate, and binucleated cells were seen occasionally. The background had few neutrophils and lymphocytes.

A diagnosis of TVT was made in this dog based on the typical cytologic and histopathologic features of the mass. TVT is a round-cell neoplasm that predominantly affects the external genital mucosa of male and female dogs.1 In natural conditions, TVT only occurs in dogs. However, infection is occasionally reported in other canine species, such as foxes (Vulpes vulpes), coyotes (Canis latrans), and jackals (Canis aureus).2,3 In addition, TVT has been used as a research tool to understand more about devil facial tumor disease, which affects Tasmanian devils (Sarcophilus harrisii). Both tumors have similar characteristics, are the only naturally occurring transmissible tumors known to exist in vertebrates, and share the same immune escape mechanism of major histocompatibility complex class I downregulation after becoming established in a host.4 Transmission of TVT among dogs happens regardless of gender and typically involves implantation of viable tumor cells in mucous membranes during coitus in sexually mature dogs or through biting, licking, scratching, or smelling a carrier animal.5–7

TVT usually has a benign biologic behavior, but characteristics of malignancy, including metastasis, moderate to marked anisocytosis and anisokaryosis, frequent binucleation, moderate macrokaryosis, numerous cytoplasmic vacuoles, and atypical mitotic figures, have also been reported.8–11 The metastatic sites are the skin, subcutis, regional lymph nodes, skeletal muscle, spleen, liver, eye, brain, kidney, peritoneum, tongue, and mucous membranes.12–14 The prognosis for complete remission in dogs with TVT is good unless metastatic involvement of the CNS or eye develops.14

In developed countries, TVT has been nearly eradicated as a result of policies that hinder abandonment of dogs and free-roaming dogs.15 However, sporadic cases have been reported in the United States (Arizona and North Dakota) and Australia (Northern Territory and Western Australia), and occasional cases have been reported in dogs imported from northern and western Europe.15 The Veterinary Pathology Service of the Faculty of Veterinary Medicine and Animal Science of São Paulo State University has established a TVT classification scheme based on cell morphology that allows TVTs to be categorized into 3 cytomorphologic patterns: lymphocytoid, mixed, or plasmacytoid. The plasmacytoid pattern is seen most commonly, and is the most malignant pattern with the worst prognosis, representing nearly all metastatic cases.9 It is also less sensitive to treatment with vincristine, possibly because of high-permeability glycoprotein expression and a greater number of DNA breaks.16,17 The case described in this report was classified as plasmacytoid pattern.

TVT can be classified as being in a progressive or regressive phase by means of histologic examination of H&E-stained sections.18 The progressive phase of the tumor is characterized by intense cellularity, with cells with a large amount of clear cytoplasm immersed in a delicate stroma, whereas the regressive phase has evidence of moderate to abundant stromal tissue forming bands that dissect and replace the neoplastic cells.8,19 Given the histologic description, it is possible to classify the case in this report as being in the progressive phase. The progressive phase consists of suppression of major histocompatibility complex classes I and II expression by tumor cells, generating decreased natural killer cell activity and impairing the function of host T cells and dendritic cells, contributing to tumor escape.20,21 In the regressive phase, tumor-infiltrating lymphocytes secrete cytokines that increase the concentrations of major histocompatibility complex classes I and II, contributing to tumor regression.20 Furthermore, it is suggested that chemokines such as CCL5 and CCL28, produced during keratinocyte activation and tissue inflammation, together with demethylation of upregulated genes are also associated with tumor regression.22

The diagnosis of TVT is based on anamnesis and clinical, cytologic, and histologic findings; however, additional molecular and cytogenetic techniques can also be used.14 On cytologic examination, TVT cells have a distinct appearance. Neoplastic cells are round to oval with frequent mitotic figures, clumping chromatin, and 1 or 2 prominent nucleoli. The most striking cytologic finding is the presence of multiple, clear cytoplasmic vacuoles.14,23 TVT cells are distinctive when compared with the cells of other round-cell tumors, such as mast cell tumor, histiocytoma, and lymphosarcoma.23 Thus, cytologic examination is considered the first-choice diagnostic tool because it is a simple, minimally invasive, painless technique without cellular artifacts, compared with formalin-fixed biopsy samples.9 Histologically, the cellular morphology of TVTs may be challenging to distinguish from that of other round-cell tumors, especially when extragenital locations are involved.14

Immunohistochemical staining characteristics of TVTs and histiocytomas are identical (positive for vimentin, lysozyme, α1-antitrypsin, glial fibrillary acidic protein, CD45RA, and CD45; and negative for cytokeratins, S-100, and muscle markers).14,24 Therefore, the final diagnosis should be based on the clinical information in conjunction with cytologic and histopathologic findings. The immunohistochemical staining characteristics strongly suggest that TVTs have a histiocytic origin.14 In this reported case, the neoplastic cells were immunonegative for CD79α, MUM-1, and CD3, ruling out B-cell lymphoma, plasmacytoma, and T-cell lymphoma, respectively.

Cytogenetic studies support the theory of clonal transmission. In TVT cells isolated from animals from different geographic regions, the chromosome number varied from 57 to 59 (vs 78 chromosomes in clinically normal dogs), with 15 to 17 chromosomes being metacentric or submetacentric.25 These chromosomal changes may have resulted from balanced fusions and not from the gain or loss of genetic material.26 In addition, TVTs have a unique molecular characteristic based around a rearrangement of the protooncogene c-myc, which is absent in normal somatic cells and gametes, and other neoplasms. Rearrangement detected with an in situ PCR assay has been used as a diagnostic tool to make a definitive diagnosis of canine TVT.26,27

Dogs with TVT can have secondary lymphocytic infiltration to the lesion causing a mild degree of lymphopenia. Genital bleeding is present in some cases, causing anemia.28 In this dog, none of these hematologic changes was present. The serum biochemical abnormalities (ie, hypoalbuminemia, hyperglobulinemia, and hyperproteinemia) seen in this dog may have been secondary to dehydration or inflammation within the neoplasm.29 The high mean corpuscular hemoglobin concentration was probably an artifact resulting from plasma hypertonicity caused by an excess of EDTA in the collection tube.30

Treatment options for TVT include surgery, radiotherapy, and chemotherapy. Surgical treatment has low efficacy because of its high recurrence rate. Radiotherapy requires specialized equipment and has a high cost. Chemotherapy is preferred, and the drug of choice is vincristine.14,31 The therapeutic protocol involving vincristine does not cause behavioral or reproductive impacts.14 In cases of drug resistance or adverse effects, vinblastine or doxorubicin can be used as a single agent to treat TVTs.31,32 Cyclophosphamide and methotrexate are ineffective as single drugs and must be used in combination with vincristine to cause regression of TVTs.31 Lomustine (60 mg/m2, PO, q 3 weeks for 3 doses) had been reported to lead successfully to regression of vincristine-resistant TVTs.33 In this case, the dog underwent 5 chemotherapy sessions with vincristine (0.75 mg/m2, IV, once; then, 0.70 mg/m2, IV, q 1 week). A dose reduction between the first and subsequent vincristine doses occurred because adverse effects such as emesis, diarrhea, and hypoxia. Although the TVT in this case was classified as the plasmacytoid form, which is considered to be less sensitive to chemotherapy, there was complete tumor regression after treatment with vincristine.