Photograph of the brain from a 20-month-old 3.9-kg domestic shorthair cat euthanized because of weakness, lethargy, and hyporexia that progressed to ataxia, seizures, and vision loss which did not respond to treatment. The brain has been sectioned midsagittal along the longitudinal fissure to expose the lateral ventricles. The lateral ventricles are dilated and bordered by abundant homogenous off-white soft glistening white matter (periventricular edema).

Photomicrograph of the gray and white matter junction of a cerebral folium adjacent to a lateral ventricle of the cat described in Figure 1. There is marked tinctorial difference in staining between the gray matter (lower left) and the white matter (upper right) where the white matter is rarefied and effaced by multiple large coalescing vacuoles (intramyelinic and periaxonal edema). H&E stain; bar = 100 µm. 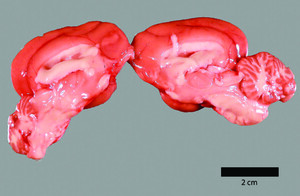 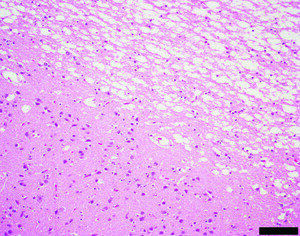 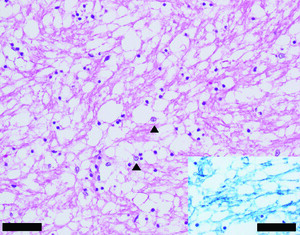 A 20-month-old 3.9-kg spayed female domestic shorthair cat with indoor and outdoor access was submitted to the Animal Disease Diagnostic Laboratory at Purdue University for necropsy and diagnostic investigation. The cat had an 11-day history of weakness, lethargy, and hyporexia that progressed to ataxia, seizures, and vision loss. During hospitalization, the cat had been treated with prednisolone (5 mg, PO, q 12 h), clindamycin (50 mg, PO, q 12 h), maropitant citrate (3.8 mg, IV, q 24 h), famotidine (3.8 mg, IV, q 12 h), dexamethasone sodium phosphate (0.8 mg, IV, once) and had been maintained on IV fluids supplemented with B-complex vitamins and administered at a rate of 20 mL/hour. Due to the progression of clinical signs, the patient was electively euthanized with IV administration of pentobarbital sodium on the 11th day of hospitalization. The cat had been vaccinated against rabies virus within the prior year. At the time of hospitalization, the cat tested negative for FeLV and FIV, had feline pancreatic lipase concentration within reference limits, and was seronegative for anti–Toxoplasma IgM and IgG. Following euthanasia, the cat's body was refrigerated until the time of necropsy 28 hours later.

On external examination, the oral and ocular mucous membranes were pale pink. The cat was well conditioned with adequate subcutaneous, abdominal, and mediastinal adipose tissue, and a body condition score of 6/9. The lateral ventricles of the cerebrum were dilated and bordered by strikingly homogeneous white to off-white soft glistening white matter (Figure 1).

Tissue samples of eye, cerebrum, cerebellum, brain stem, optic nerve, pituitary gland, lung, liver, spleen, kidney, urinary bladder, and intestines were fixed in neutral-buffered 10% formalin, processed routinely, sectioned, and then stained with H&E stain. Microscopically, the cerebrocortical white matter was diffusely rarefied and irregularly distended by multiple large coalescing vacuoles that cavitated to become large open spaces (status spongiosis; Figure 2). Affected regions had intramyelinic edema as well as myelinic and axonal loss with very rare spheroids. Throughout the white matter, there was gliosis characterized by aggregates of glial cells with condensed nuclei interspersed among hypertrophied astrocytes that either had vesiculate nuclei (Alzheimer type II) or enlarged nuclei surrounded by pale eosinophilic cytoplasm (gemistocytic; Figure 3). Vacuolation extended into the deep cerebrocortical gray matter laminae causing individual neuronal necrosis. Similar vacuolation was seen within the white matter tracts of the brainstem, cerebellar peduncle, and the optic nerve at the level of the orbit. Histochemical staining with Luxol fast blue stain performed on a section of cerebrum revealed that the cerebrocortical white matter was diffusely hypochromatic with a widening of the myelin sheaths indicating periaxonal edema.

Fresh frozen samples of cerebrum submitted to the California Animal Health and Food Safety Laboratory System at the University of California-Davis were analyzed via reverse-phase ultrahigh-performance liquid chromatography-mass spectrometry for bromethalin's toxic metabolite, desmethylbromethalin (DMB). The resulting analysis demonstrated a trace amount of DMB within the sample of cerebrum provided. This finding indicated the concentration of DMB in the brain was below the lower limit of quantitation of 1.0 ppb but above the lowest detection limit of 0.35 ppb.

Case summary: diffuse, severe vacuolar myelinopathy of the cerebrum, cerebellum, brain stem, and optic nerve due to the neuropathologic effects of bromethalin toxicosis in a cat.

This was an unusual case of bromethalin toxicosis as exposure to bromethalin does not always correlate with the severity of histopathologic findings.1 It was likely that the manifestation of signs in the cat of the present report could have been due to the progression of bromethalin toxicosis over the course of an 11-day period. Other differential diagnoses of vacuolar myelinopathy in cats include hexachlorophene exposure or an idiopathic form of status spongiosis.2,3 Hexachlorophene is an uncommon household disinfectant, making exposure less likely, and was not assayed in this specific case. Idiopathic status spongiosis has been reported in kittens. However, the cat in the present case was 20 months old with no previous history of neurologic signs, making the idiopathic form of disease less likely.

The frequency of use of bromethalin as a rodenticide has dramatically increased following the 2011 action by the US Environmental Protection Agency banning household use of second-generation anticoagulants, as indicated by a 65% (numerator and denominator not reported) increase in bromethalin cases reported to the Pet Poison Helpline since 2011.4,5 Unfortunately, there is no specific antidote for bromethalin poisoning, unlike anticoagulant rodenticides, which have a very effective antidote, vitamin K1. Bromethalin is rapidly metabolized by the liver to its active, toxic metabolite DMB, which affects the nervous system by uncoupling mitochondrial oxidative phosphorylation.6 This disruption in oxidative phosphorylation leads to decreased production of ATP, which affects the function of Na-K-ATPase pumps and results in cellular swelling.7,8 In addition, bromethalin has been reported to cause lipid peroxidation in experimental models in rodents.8

An analytic method for the detection of DMB has been developed and published by the Toxicology Section of the California Animal Health and Food Safety Laboratory at the University of California-Davis.5 Preferred samples for analysis include fat and brain reflecting the lipophilicity of bromethalin and DMB. For the cat of the present report, analysis revealed that the concentration of DMB in the brain was below the lower limit of quantitation of 1.0 ppb but was above the detection limit of 0.35 ppb. No bromethalin or DMB should be present in an animal. Therefore, the detection of any amount of DMB is indicative of bromethalin exposure.

In cats, it has been reported that the LD50 of bromethalin is 1.5 mg/kg.7 At this dose, even aggressive treatment at the time of exposure resulted in a 100% (5/5) morbidity rate and 80% (4/5) mortality rate.7 At lower doses of 0.54 mg/kg, clinical signs of disease can take 2 to 7 days to develop, and early therapeutic intervention may assuage clinical signs.7 Current therapeutic interventions are time dependent and limited to decreasing absorption from the gastrointestinal tract through emesis and the administration of activated charcoal, which have reported beneficial outcomes if administered early.8

Bromethalin has been associated with the clinical signs of ataxia, seizures, decerebrate posture, hyperreflexia, decreased conscious proprioception, and anisocoria.7 There can be little to no gross signs of toxicosis.1 However, in the present case, a marked pallor and swelling of the cerebrocortical white matter bordering the lateral ventricle was noted on gross necropsy, postulated to be due to the low concentration of DMB within the nervous tissues and the protracted course of disease.

Histologically, the disease is characterized by intense vacuolation within the white matter of the cerebrum, cerebellum, and in some cases, the optic nerve.7 Ultrastructural analysis of the white matter demonstrates vacuoles between myelin lamellae (presumed intramyelinic edema).7 Bromethalin preferentially targets the central nervous system, and more specifically, the white matter in which oligodendrocytes are most susceptible. The intramyelinic edema in this case supported toxicosis as the cause of the clinical course of disease. The prominent and hypertrophied astrocytes with vesiculate nuclei noted within the vacuolated white matter were likely due to the protracted course of disease. In this case, diagnosis of bromethalin toxicosis was made based on the detection of DMB in the brain by the use of reverse-phase ultrahigh-performance liquid chromatography-mass spectrometry in conjunction with the adverse clinical signs and histological lesions reported.