Photographs of the subcapsular surface (A) and a cut section (B) of the left kidney from a 15-year-old spayed female domestic longhair cat with acute renal failure that was euthanized after 6 weeks of inappetence and weight loss. Multifocal to coalescing, pale-tan to white nodules extend from and efface the renal cortex. Bar = 1 cm.

Photomicrograph of a section of the renal cortex. Dense aggregates of large neoplastic round cells infiltrate and expand the renal interstitium, separating renal tubules and glomeruli. H&E stain; bar = 100 µm. Inset—Neoplastic round cells have scant eosinophilic cytoplasm and a large, round to irregular nucleus with finely stippled chromatin and prominent nucleoli. H&E stain; bar = 25 µm. 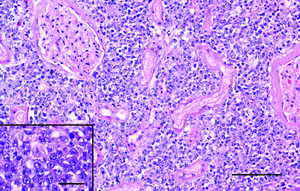 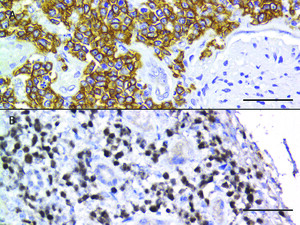 A 15-year-old spayed female domestic longhair cat with acute renal failure was euthanized by the referring veterinarian after 6 weeks of inappetence and weight loss. The body was submitted to the Purdue University Animal Disease Diagnostic Laboratory for postmortem examination. The cat had a 2-year history of diabetes mellitus and was enrolled in a clinical trial for treatment of this endocrine disorder.

Grossly, the kidneys were large and irregular. The right kidney was approximately 5 X 3 X 2 cm; the left kidney was approximately 5.5 X 4 X 3 cm. Bilaterally, multifocal to coalescing, pale-tan to white nodules extended hemispherically from the subcapsular surface to the cortex, effacing the normal renal architecture (Figure 1). Similar pale-tan to white tissue that bulged on cut section focally infiltrated the right renal capsule. In addition, multifocal distinct ulcerations ranging from 2 to 6 mm in diameter disrupted the ventral and dorsolateral glossal mucosal surfaces, the pancreas was small and irregular (approx half the expected size), firm fibrous tissue coated and infiltrated the pancreas, and the right thyroid gland was larger than expected (approx 7 X 4 X 3 mm).

Representative samples of all tissues assessed at necropsy were formalin fixed for 12 hours and processed routinely; 3-µm-thick sections were stained with H&E stain and evaluated histologically. A poorly circumscribed, unencapsulated neoplastic proliferation of large round cells bilaterally infiltrated the renal cortical interstitium (Figure 2) and effaced the renal cortex; multifocal aggregates of neoplastic round cells extended into the medulla. Neoplastic cells disrupted the subcapsular renal surface and segmentally expanded the renal capsule.

The neoplastic cells had distinct cell borders, a scant amount of eosinophilic cytoplasm, and a large round to irregular nucleus (approx 2 to 3 times the size of feline RBCs) with finely stippled chromatin and large prominent nucleoli. There was moderate anisocytosis and anisokaryosis, with 22 mitotic figures in 10 high-power (400X) fields (up to 6 mitotic figures in each 400X field). Neoplastic cells displaced, surrounded, and separated the remaining renal tubules and glomeruli. Segmentally, the renal tubular epithelium was variably vacuolated to degenerate. Thick bands of fibrosis expanded multiple Bowman capsules; remaining glomeruli were sclerotic. Dense bands of mature fibrosis expanded the medullary interstitium and separated medullary tubules. Concretions of basophilic mineral were present in rare medullary tubular lumens.

Lymphoma represents one of the most common malignancies reported in domestic animals. In cats, lymphoma is the most common hematopoietic neoplasm.1 As in dogs, genetic mutations may lead to the general development of lymphoma in cats; certain feline breeds, notably Siamese, are overrepresented for certain lymphoma types.2,3

Historically, feline lymphomas were more commonly classified as nodal and associated with FeLV infection.2 Since the development of efficacious testing and vaccination protocols, however, cases of FeLV-associated nodal lymphoma have decreased, and more cases of abdominal and atypical lymphoma are being seen.2 Similarly, the incidence of mediastinal lymphoma, commonly associated with FeLV infection and most often diagnosed in young animals, has also decreased with vaccination.3–6 Although feline enteric T-cell lymphoma is currently the most common abdominal lymphoma reported in cats,2,3 renal lymphoma represents another important feline lymphoma entity. In cats, renal neoplasia is rare; however, renal lymphoma is the most common renal tumor reported.7–9 In a case study10 of 110 cats, the kidneys represented the second most commonly affected extranodal site after the nasal cavity, and several studies1,10,11 report that 3.6% to 30% of feline lymphoma cases have renal involvement.

In cats, as in other species, renal lymphoma can present as unilateral or bilateral renomegaly12 with diffuse or nodular effacement of the renal parenchyma.8,12 Bilateral disease is more commonly reported,7 and renomegaly is the most consistently identified ultrasonographic lesion.1 In all species, as in the feline case reported here, lesions are often white to tan and soft and bulge on cut section.8 Other possible differential diagnoses for renal masses in cats include pyogranulomatous inflammation secondary to feline infectious peritonitis and other neoplastic processes, including bilateral renal cell carcinoma and metastatic disease. Lesions associated with feline infectious peritonitis are generally centered on vessels,13 and the classic gross appearance of lymphoma will often distinguish this neoplastic process from others.

Histologically, neoplastic lymphocytes will efface and replace the renal parenchyma.8 The neoplastic lymphocytes generally have a blastic nucleus (ie, a large hyperchromatic nucleus with prominent nucleoli) and a scant amount of eosinophilic cytoplasm.8 Additional histologic features imperative to an accurate diagnosis include cellular and nuclear size and shape and mitotic index. Neoplastic cell size is defined as the size of cell nuclei, compared with the size of RBCs. Small lymphomas have nuclei 1 to 1.25 times the size of feline RBCs, intermediate lymphomas have nuclei approximately 1.5 times the size of feline RBCs, and large lymphomas have nuclei that are at least 2 times the size of feline RBCs.5 Histologic differential diagnoses may include histiocytic sarcoma and myeloproliferative disease, and immunohistochemical staining may be required to differentiate between lymphoma and these round cell proliferations.8 In the present case, there were 22 mitotic figures/10 hpf, consistent with a medium mitotic index (defined as 6 to 10 mitoses/hpf).5

Further subclassification of lymphomas is based on results of immunophenotyping, a central component of the lymphoma diagnosis, regardless of species.3 Commonly used immunohistochemical markers to characterize feline lymphomas include CD3 for T cells and CD20 and Pax5 for B cells.3 A PCR assay for antigen receptor rearrangements can also be used to determine the clonality of a population of round cells and differentiate between B-cell and T-cell phenotypes when immunohistochemical results are inconclusive.3 Although the neoplastic cells that effaced the renal cortex in the present case were consistent with neoplastic B cells, a clear pattern of B-cell versus T-cell renal lymphoma has not been established.8

Whether renal lymphoma is primary or a component of systemic metastatic or multicentric disease, with additional foci of lymphoma present, remains controversial. In cats, metastatic renal neoplasms are 7 times as frequent as primary neoplasms,8 and in a study1 of 27 cases of feline renal lymphoma, approximately 51% of the cases had multicentric disease. In the present case, neoplastic lymphocytes were only identified in the kidneys, which is most consistent with primary renal large B-cell lymphoma.