Photomicrograph of a hepatic biopsy sample from an African gray parrot (Psittacus erithacus) with iron overload disease. The artifactual changes observed are due to the small size of the biopsy sample and slight crushing of the tissue. H&E stain; bar = 100 µm.

Photomicrograph of a follow-up hepatic biopsy sample obtained after 14 months of treatment that consisted of feeding a low-iron, low-vitamin C diet, adding a black tea supplement to the bird's water, and administering deferoxamine. The artifactual changes observed are due to the small size of the biopsy sample and slight crushing of the tissue. H&E stain; bar = 100 µm. 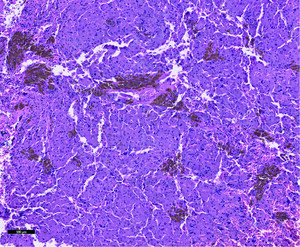 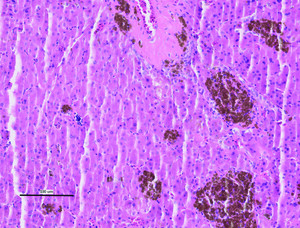 Results of the CBC were normal, but serum bile acids and cholesterol concentrations were high (Table 1). It was recommended that the patient be fed a more balanced diet for psittacines and that the seeds, eggs, and fish be removed from the diet. The owner was instructed to feed a commercially available pelleted feed (Adult Lifetime; Harrison's Bird Foods) as 80% of the diet, with the remaining 20% of the diet consisting of fresh table items, including vegetables and fruits. The owner was also instructed to encourage the patient to exercise and to feed a milk thistle supplement (Nature's Answer).

The patient was presented for multiple follow-up examinations and repeated evaluations of the CBC and serum biochemistry profile over the next 30 months. The physical examination findings remained unchanged. Although it had been recommended that the patient receive the milk thistle supplement continuously, the owner had intermittently stopped and started administration over this time period. The owner had switched to the recommended commercially available parrot pellet and also gave the bird bread (Bird Bread Mix Original; Harrison's Bird Foods), a scrambled or hard-boiled egg daily, apple, cantaloupe, banana, frozen organic peas, corn, lima beans, and seeded toast with peanut butter. It was again recommended that the owner discontinue feeding the bird eggs.

Follow-up blood work over the 30-month time period revealed slight alterations in serum bile acids and cholesterol concentrations and lactate dehydrogenase activity (Table 1), with the general trend being toward increases in values indicative of altered hepatic function. Radiographs were obtained during this period, but no abnormalities were observed. Owing to the fact that birds are known to mask signs of illness, hepatic biopsy of the liver was recommended to help identify a cause for the increase in serum bile acids concentration.

For the hepatic biopsy, feathers were plucked over the caudal aspect of the coelom, and the surgical site was prepared with chlorhexidine and alcohol scrub. A ventral midline coeliotomy with a transverse incision to the left was made. The liver was identified, and a segment was collected for histopathologic evaluation. The incision was closed routinely, and recovery from surgery was uneventful.

Multiple aggregates of Kupffer cells containing extensive accumulations of golden-brown cytoplasmic pigments were present throughout the liver (Figure 1). Individualized Kupffer cells with golden-brown cytoplasmic pigment were also seen diffusely in hepatic sinusoids, and moderate numbers of hepatocytes contained golden-brown or blue-gray cytoplasmic pigments. There was one area that was interpreted as mild fibroplasia that appeared to be associated with a portal triad. Results were consistent with iron overload. Examination of a section of the liver stained with Prussian blue stain revealed that the pigmented granules within hepatocytes and Kupffer cells were iron granules, confirming the diagnosis of iron overload disease.

A portion of the hepatic biopsy sample was submitted to the Colorado State University Veterinary Diagnostic Laboratory for quantitative iron analysis by means of flame atomic absorption spectroscopy. A modified dry ash procedure was used for sample preparation. The iron content was 988 ppm.

Iron overload disease is a condition characterized by accumulation of excessive amounts of iron within an organ, resulting in cellular damage. It most frequently affects the liver, with the most common lesions being hepatocellular degeneration or necrosis, hepatic cord disruption, periportal fibrosis, bile duct hyperplasia, nodular hyperplasia, and, with severe chronic disease, cirrhosis. Iron deposits in other tissues are usually not associated with cellular or architectural changes.1–3

Iron is a biologically essential element (especially in hemoglobin) and is a catalyst for chemical reactions that involve free radical formation, which can lead to cellular damage by inducing oxidative stress.4 Iron overload disease has been described in several captive avian species including mynahs and starlings (Sturnidae) and, most commonly, toucans (Rhamphastidae).1,2,5,6 In psittacines, it has been identified in lorikeets, a blue and gold macaw (Ara ararauna), a hawk-head parrot (Deroptyus accipitrinus), and African gray parrots (Psittacus erithacus).7–10

The etiology of iron overload disease is unknown. In mammals, genetics have been implicated, but in birds, excessive iron in the diet has been suggested to play a role.1,2,5–7,11,12 Iron is absorbed from the intestines and is transported hematogenously via transferrins to eventually be stored as hemosiderin or ferritin in hepatocytes and Kupffer cells in the liver, siderophages in the spleen, and cells in the bone marrow. The bioavailability of dietary iron and absorption from the intestines are increased by dietary vitamin C and reduced by dietary tannins and phytates.3 It is thought that species of birds susceptible to iron overload disease have evolved to eat foods that are low in iron. When iron is in greater supply in the diet, their ability to downregulate the absorption of iron is limited, and they will store absorbed iron in the liver in the form of hemosiderin.6 Other potential causes for iron overload disease have been postulated to be an inherited metabolic defect and altered intestinal absorption.2

Antemortem diagnosis of iron overload disease requires histopathologic evaluation of a hepatic biopsy sample. This sample can also be used for chemical analysis or quantitative image analysis with spectrometry to determine iron concentration.1,7,13,14 MRI has also been used to measure iron content in pigeons (Columba livia domestica) and hornbills.1,15 However, the small size of avian patients may make use of this diagnostic method challenging.1

In cases of early iron overload disease, treatment involves management with low-iron, low-vitamin C diets, addition of tannin to the water, phlebotomy, and administration of iron chelators. In cases of advanced disease when the patient has developed ascites, aspiration of fluid is necessary in addition to the previously mentioned treatments.2

Deferoxamine is an injectable iron chelator that has been used in birds to treat iron overload disease.2,18,19 A channel-billed toucan (Ramphastos vitellinus) with this condition was treated with deferoxamine at a dosage of 100 mg/kg, SC, once daily for 4 months.19 In a study with starlings, deferoxamine was used at this same dosage along with a low-iron diet to treat high hepatic iron content. The mean nonheme iron content in the starlings’ livers decreased from 3,132 to 450 ppm.20 Other dosages and routes of administration exist for deferoxamine, with a dosage of 40 to 50 mg/kg, IM, every 12 hours for 14 days as one suggestion.21

Treatments for the patient in the present report included feeding a low-iron, low-vitamin C diet and adding a black tea supplement (Iron Out; Greywood Manor Tea and Provisions) to the bird's water because of the supplement's tannin content. Phlebotomies were performed, with 10% of the blood volume removed every 2 weeks for 4 treatments. Treatment with deferoxamine was also initiated.

Fourteen months after the first biopsy, a second hepatic biopsy was performed on the same liver lobe to determine whether the patient's condition was improving. The histopathologic diagnosis was the same as for the first hepatic sample; however, the second sample had a reduced degree of fibroplasia (Figure 2). Quantitative analysis of iron content was performed as previously described, except that a larger sample was used, and the iron content this time was 8,930 ppm. This result was unexpected, because the histologic appearance had improved; however, the difference could be explained by the difference in sample size. The first sample weighed 0.11 mg, and the second sample weighed 2.58 mg. The method for quantitative iron analysis by flame atomic absorption spectroscopy has been validated for sample sizes of ≥ 10 mg. Therefore, the results that were obtained may not have been accurate, especially for the first sample.

Following the second hepatic biopsy, treatment with deferoxamine was continued, along with the previous diet and tea supplementation. Repeated blood work revealed normal hepatic biochemical results. Repeated biopsy of the liver was recommended but not permitted. Follow-up blood work was performed every 3 to 6 months for monitoring, and as of 24 months after deferoxamine treatment was initiated, no abnormally high hepatic biochemical results have been identified.