Intraoperative photograph of the abdominal cavity of a 1.5-year-old male Bernese Mountain Dog showing cranial displacement of the stomach (white star) by a large abdominal mass (black star) with extensive superficial arborization of blood vessels. The pancreas (arrowheads) is closely adhered to the ventral surface of the mass.

Photomicrograph of a section of the abdominal mass from the dog in Figure 1, depicting neoplastic infiltration of the colonic serosa and tunica muscularis. H&E stain; bar = 4 mm. 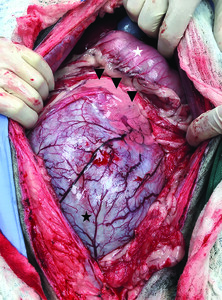 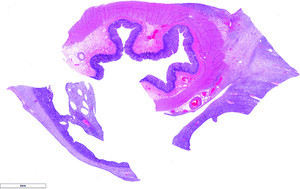 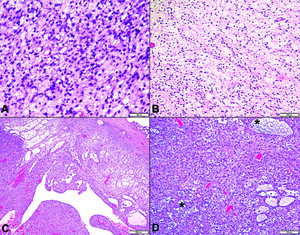 A 1.5-year-old 54-kg male Bernese Mountain Dog was examined by a referring veterinarian because of a 1-week history of hyporexia, lethargy, and abdominal distension.

Upon physical examination, the dog had slightly pale oral mucous membranes and a distended abdomen. Abdominal radiography and focused assessment with sonography for trauma (FAST) of the abdomen revealed a large soft tissue opacity mass that was heterogeneously cavitated, with multiple anechoic fluid-filled pockets and a thickened hyperechoic wall. Subsequent contrast-enhanced CT of the abdomen revealed the mass to have been 19.5 X 26.6 X 12.5 cm, hypoattenuating, and minimally peripherally contrast enhancing and to have had central, thin, amorphous contrast-enhancing linear striations. The mass was noted to communicate with a loop of large intestine and to cranially displace the liver and stomach, dorsally displace the left lobe of the pancreas and portal vein, and laterally displace the spleen and small intestine. A-FAST and CT of the thorax revealed no clinically meaningful changes, other than enlarged sternal lymph nodes on CT. Ultrasound-guided fine-needle aspirate specimens of the abdominal mass were obtained, and cytologic evaluation revealed rare groups of 1 to 3 polygonal to spindle mesenchymal cells on a poorly cellular, hemodilute background. These cells had moderate nucleus-to-cytoplasm ratios, moderate basophilic cytoplasm, and large (2 to 3 times the diameter of a neutrophil) oval nuclei, with stippled chromatin and 2 or 3 medium to large nucleoli.

The dog then underwent an exploratory laparotomy, during which it was determined that the mass originated from the descending colon and had multiple attachments to the omentum and pancreas (Figure 1). The mass was drained of 1.4 L of serosanguinous fluid and was removed via a colonic resection and anastomosis. Additionally, a punch biopsy specimen was taken of a subjectively enlarged mesenteric lymph node. The colonic mass and lymph node biopsy specimen were submitted for histopathology.

Histologic examination of the colonic mass revealed a partially encapsulated, loosely to densely cellular neoplasm, which mildly to diffusely infiltrated and effaced the colonic serosa and tunica muscularis (Figure 2) and extended into the submucosa multifocally. In some areas, the neoplasm was composed of spindle cells forming relatively closely packed, interlacing streams and bundles, supported by a fine, loosely arranged, fibrovascular stroma, whereas in other areas, neoplastic cells were widely scattered among an abundant, often wispy, pale basophilic (myxomatous) stroma (Figure 3). In some sections, neoplastic spindle cells bordered or surrounded numerous small to large channel-like or cavernous spaces, which were either empty or contained amphophilic myxomatous material or occasionally blood. Neoplastic spindle cells had indistinct cell borders and occasionally vacuolated, scant, eosinophilic fibrillar cytoplasm. Nuclei were elongate to oval or round, with finely stippled to vesiculate chromatin, and 1 variably distinct, eosinophilic nucleolus. Anisocytosis and anisokaryosis were mild to moderate. There were 15 mitotic figures/10 hpfs (2.37 mm2). Multifocally, there was scattered hemorrhage and variably sized, often serpentine foci of coagulative necrosis. In addition to routine histologic evaluation, histochemical and immunohistochemical analyses were performed on sections of colonic mass. Alcian blue histochemical stain is used to identify an extracellular matrix as mucin, and in this case, this stain better highlighted the proteoglycan-rich, myxomatous nature of both the supporting stroma as well as the lakes of material multifocally separating neoplastic cells. By immunohistochemistry, neoplastic spindle cells had diffuse, strong, cytoplasmic immunoreactivity for vimentin and lacked immunoreactivity for cluster of differentiation (CD) 204, CD117 (c-kit), S100 protein, DOG1 protein, protein gene product 9.5, and α-smooth muscle actin.

Morphologic diagnosis and case summary: primary colonic myxoid sarcoma, most compatible with a myxosarcoma, in a dog.

Based on the histologic findings of spindloid neoplastic cells frequently suspended in an abundant, loose, Alcian blue-positive myxomatous stroma and bordering confluent lakes of variably myxomatous material, together with neoplastic infiltration into the colonic wall, differential diagnoses considered included myxosarcoma, myxoid-containing gastrointestinal stromal tumor (GIST), myxoid variant of a peripheral nerve sheath tumor (PNST), or liposarcoma, as these soft tissue sarcomas overlap in their histologic features.1 To better characterize this neoplasm, a series of immunohistochemical (IHC) analyses were performed. Among the tested IHC markers, neoplastic cells only exhibited immunoreactivity for vimentin, confirming a sarcoma. Although this neoplasm was not morphologically compatible with histiocytic sarcoma, immunohistochemistry for CD204 was performed at the request of a clinical oncologist, given the high prevalence of histiocytic neoplasia in Bernese Mountain Dogs. As expected, neoplastic cells lacked immunoreactivity for CD204, thus excluding a neoplasm of histiocytic origin. The absence of immunoreactivity for additional markers, such as CD117 and DOG1, S100 protein, and protein gene product 9.5, as well as α-smooth muscle actin, effectively ruled out myxoid-containing GIST, myxoid variant of PNST, and the rare possibility of a neoplasm of smooth muscle origin. In the absence of fresh tissues to perform adipose-specific stains, the possibility of a myxoid variant of liposarcoma could not be fully excluded, although the absence of cytoplasmic lipid-filled vacuoles in neoplastic cells made this diagnosis less likely. Ultimately, based on the histomorphology, Alcian blue-positive myxomatous stroma, IHC findings, and lack of lipid differentiation, a diagnosis of myxosarcoma was favored.

Myxosarcomas are mesenchymal neoplasms that fall under the classification of soft tissue sarcomas, have their origin in fibroblasts, and contain abundant myxoid matrix composed of mucopolysaccharides,1,2 as highlighted by Alcian blue staining. Myxosarcomas most commonly affect the subcutaneous tissues over the trunk and limbs in animals.1,3,4 Like other soft tissue sarcomas affecting the skin, myxosarcomas are considered to be rare in dogs and cats and tend to occur in middle-aged to older animals.1,5 Similar to other soft tissue sarcomas, myxosarcomas are also locally infiltrative,2 and complete excision of neoplasms in dogs and cats has the potential to be curative if complete surgical margins are attained.6 Overall, while local recurrence is considered likely, metastasis is reportedly uncommon to rare.3,6 A recent retrospective study3 evaluating the prognosis of 32 dogs with cutaneous myxosarcomas identified local recurrence in 13 (40.6%) and metastasis in 8 (25%). In that study,3 all but 2 cases with local recurrence involved incomplete resection, and metastasis was most common to regional lymph nodes. Based on these findings, the authors suggested that cutaneous myxosarcomas may have a higher rate of local recurrence and higher metastatic rate to local lymph nodes than what have been previously reported for soft tissue sarcomas.3 In addition to the potential for lymph node metastasis, pulmonary metastases have been very rarely reported in a small number of dogs with cutaneous myxosarcomas.3,4

Rarely, myxosarcomas can affect visceral tissues and have been described to arise from the lung,7 left ventricle,8,9 left atrium,10 right atrium,11 right ventricle,12 mitral valve,13 pericardium,14 jaw,15 jejunal mesentery,16 greater omentum,17 spleen,18 eye,19–21 brain,20 spinal cord,22 and vertebra.23 To our knowledge, apart from the present case, there is only a single other case report16 of a visceral myxosarcoma associated with the intestinal tract in a dog. In that report by Kim et al,16 the mass was mesenteric in origin and adhered to the jejunal serosa, with no reported intestinal wall infiltration, unlike the infiltration to effacement of the colonic tunica muscularis and submucosa noted in the present case. In the case of the mesenteric myxosarcoma, the diagnosis was made based on morphologic features and an Alcian blue-positive supporting matrix. Additionally, the mesenteric myxosarcoma was assigned a presumptive low grade based on a Ki-67 index of 2.5, with no recurrence or metastasis for approximately 30 months after surgery.16 In the present case of a colonic myxosarcoma, although the neoplasm was completely excised and there was no histologically evident metastasis to the examined regional mesenteric lymph node, the patient was returned to the referring veterinarian 5 months after surgery due to regurgitation, diarrhea, and a painful, fluid-filled abdomen. Abdominal radiography at that time revealed some loss of serosal detail with no obvious mass effect. Ultimately, the owner declined further diagnostic testing and elected euthanasia; as a result, it was unclear whether these clinical signs were attributable to neoplastic recurrence or to a different disease process. Given the rarity of visceral myxosarcomas and lack of a large study with robust prognostic data for these neoplasms,24 full clinical staging and continued monitoring are warranted as the field gathers more data regarding the biologic behavior of these neoplasms.