Photographs of a 15-year-old 4.6-kg spayed female black and tan Miniature Pinscher with 6-month history of generalized mottled leukotrichia, erythroderma, and scaling with multifocal crusting viewed from the left (A) and front (B), showing depigmentation of the rostral aspects of lips; eroded thickened alopecic patches on the ventral aspect of the neck, shoulder region, and thorax; and a crusted lesion on the left lateral aspect of the thorax.

Photographs of a 15-year-old 4.6-kg spayed female black and tan Miniature Pinscher with 6-month history of generalized mottled leukotrichia, erythroderma, and scaling with multifocal crusting viewed from the left (A) and front (B), showing depigmentation of the rostral aspects of lips; eroded thickened alopecic patches on the ventral aspect of the neck, shoulder region, and thorax; and a crusted lesion on the left lateral aspect of the thorax.

Photomicrograph of a section of skin from the dog in Figure 1, showing strong cytoplasmic immunoreactivity of neoplastic lymphocytes in the epidermis, dermis, hair follicles (arrows), and adnexal structures, including apocrine and sebaceous glands (arrowheads). Immunohistochemical staining for cluster of differentiation 3; bar = 300 µm. 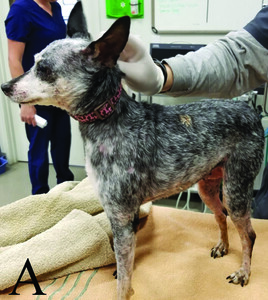 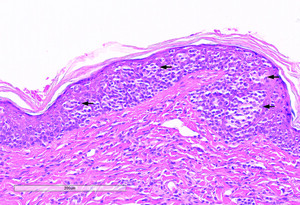 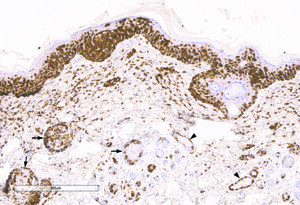 A 15-year-old 4.6-kg spayed female black and tan Miniature Pinscher was referred to a veterinary dermatology specialty clinic because of a 6-month history of pruritus with progressive generalized erythema, scaling, and leukotrichia. The patient was being treated for suspected atopic dermatitis with oclacitinib (0.6 mg/kg, PO, q 24 h) and cephalexin (32.6 mg/kg, PO, q 12 h) with minimal improvement. A CBC, biochemical panel, and measurements of thyroxine and free-thyroxine concentrations by equilibrium dialysis were performed prior to referral and revealed mild stress-induced lymphopenia and thyroid hormone concentrations within reference limits. A peripheral blood smear was not reviewed prior to referral.

On physical examination, the dog was in good body condition, and all vital signs were within reference limits. There was depigmentation of the rostral and lateral lip mucous membranes without the presence of oral ulcerations or erosions. There was diffuse mottled leukotrichia affecting both the black and tan regions of the dog’s coat, with generalized erythroderma and scaling of the skin (Figure 1). Multifocal thick, eroded lesions with adherent crusts were noted on the lateral and ventral aspects of the thorax and perineal region as well as multifocal erosive alopecic patches that were most prominent over the ventral cervical and thoracic regions. Macular hyperpigmentation with erythematous papules was noted in the inguinal region and medial aspects of the thighs. The interdigital spaces and paw pads were not affected. No abnormalities were noted on abdominal palpation, and peripheral lymphadenopathy was not present.

Superficial and deep skin scrapings were performed and did not reveal any parasites. Skin cytology of crusted lesions on the lateral thorax revealed pyogranulomatous inflammation with rare coccoid bacteria.

Three 6-mm punch biopsy specimens were collected from affected areas of the left lateral shoulder, mid dorsum, and the left lateral aspect of the thorax. All tissues samples were routinely processed and then stained with H&E stain. In all samples examined, a monomorphic population of lymphocytes expanded the dermis and infiltrated into the epidermis and adnexal structures, including hair follicles, apocrine sweat glands, and sebaceous glands. Neoplastic cells were multifocally present singly or as aggregates (Pautrier microabscesses) within the epidermis and follicular epithelium (Figure 2). The lymphocytes were small to medium size, with variably distinct cell borders, a round nucleus, and a scant amount of lightly basophilic cytoplasm. Two mitotic figures were seen in 10 contiguous nonoverlapping hpfs (2.37 mm2). Mild to moderate orthokeratotic to parakeratotic hyperkeratosis and a focal ulceration capped by neutrophils, fibrin, and necrotic cellular debris were observed. Pigment-laden macrophages (pigmentary incontinence) were present surrounding adnexa.

To further characterize the infiltrate, immunohistochemistry was performed (Kansas State Veterinary Diagnostic Laboratory) for B-cell (cluster of differentiation [CD] 79a) and T-cell markers (CD3). A strong cytoplasmic reactivity with CD3 immunohistochemistry was observed within the neoplastic population in the epidermis, dermis, and adnexal structures (Figure 3).

Canine epitheliotropic cutaneous lymphoma has classically been compared to several subtypes that are named after the human presentations of cutaneous epitheliotropic lymphoma, including mycosis fungoides, Sézary syndrome, and pagetoid reticulosis; however, it is unclear whether these distinctions are accurate homologs or have clinical relevance in veterinary medicine. Mycosis fungoides is the most common subtype and was the form seen in this patient. It is characterized by a lymphocytic infiltrate in the epidermis, superficial dermis, hair follicles, and adnexal structures. In addition, aggregates of atypical lymphocytes (Pautrier microabscesses) are commonly observed within the epidermis.5 The clinical presentation of canine epitheliotropic cutaneous lymphoma varies as the disease progresses.2 Exfoliative erythroderma encompasses generalized scaling and erythema with varying degrees of erosions, ulcerations, alopecia, and hypopigmentation predominately affecting the head, trunk, and mucocutaneous junctions.5 The exfoliative erythroderma can progress to patches, plaques, or nodules, and changes in coat color can be seen over time. The leukotrichia seen in the dog of the present report was likely due to the tropism of lymphocytic infiltrate toward the hair follicles.6 Paw pads may be affected with hyperkeratosis, ulcerations, or depigmentation. Peripheral lymphadenopathy can be seen but does not have to be present.5 Sézary syndrome is similar to mycosis fungoides in clinical and histopathologic presentation but with a concurrent circulating leukemic blood component.2 Pagetoid reticulosis subtype of mycosis fungoides consists of neoplastic cells confined to the epidermis and adnexal structures. In this form, localized or generalized lesions of erythematous papules, plaques, and erosions and ulcerations of the mucocutaneous junctions, oral cavity, paws, and ventral aspect of the abdomen are observed.5

Nonepitheliotropic cutaneous lymphoma is an uncommon form of cutaneous lymphoma, compared to its epitheliotropic counterpart. It is characterized by diffuse dermal and subcutaneous infiltration by malignant lymphocytes. Most commonly, these malignant lymphocytes are of T-cell lineage, but B-cell lineage has been reported.7 Clinically, nonepitheliotropic T-cell lymphoma usually manifests with multifocal firm dermal or subcutaneous nodules or plaques that are red or purple and alopecic. Exfoliative erythroderma has been reported5 in about 20% of cases, with pruritus and oral mucosal involvement rarely reported. A subtype of nonepitheliotropic cutaneous T-cell lymphoma that has been reported in dogs is subcutaneous panniculitis-like T-cell lymphoma.8 This is characterized by neoplastic lymphocytes infiltrating the subcutaneous adipose tissue that manifests as singular or multiple masses that may become erythematous or ulcerative. The progression of disease is rapid, with median survival time ranging from 17 days without treatment to up to 7 months with treatment.8 Another subtype is cutaneous lymphocytosis. This is an uncommon disease characterized by diffuse well-differentiated T-lymphocytic dermal infiltrates that clinically appear similar to epitheliotropic cutaneous lymphoma with a slow progression.9 The lesions tend to wax and wane for several years with minimal response to corticosteroids and tacrolimus. Cutaneous lymphocytosis is considered a form of indolent lymphoma with potential progression to a high-grade lymphoma.9

Cutaneous epitheliotropic T-cell lymphoma can often be misdiagnosed as the clinical presentation can vary as the disease progresses. Dogs with exfoliative erythroderma may develop varying degrees of generalized pruritus, which may be mistaken as atopic dermatitis or scabies infestation with secondary pyoderma.5 Depigmentation, erythema, and ulcerations of the mucocutaneous membranes may be misdiagnosed as immune-mediated diseases such as pemphigus vulgaris, bullous pemphigoid, or lupus erythematosus. Foot pad hyperkeratosis, depigmentation, and ulceration may also be seen with pemphigus foliaceus and superficial necrolytic dermatitis.5

Canine epitheliotropic cutaneous lymphoma has a median survival time ranging from a few months to 2 years with medical treatment, surgical treatment, or both.2 Due to the fast rate of progression, medical intervention is predominately used for improving the quality of life. Dogs with solitary or localized nodules that undergo surgical removal with or without chemotherapy tend to have a longer survival time than dogs with generalized lesions. Other treatment modalities include multiagent chemotherapy, phototherapy, radiation therapy, and systemic treatment with retinoids, imiquimod, essential fatty acids, and interferon. The most common treatment for epitheliotropic cutaneous lymphoma is the alkylating agent lomustine with or without corticosteroids.5 Lomustine is administered orally at a dosage of 30 to 90 mg/m2 once every 3 weeks with or without prednisone (2 mg/kg, PO, q 24 to 48 h) or equivalent.10 Bloodwork monitoring is essential as common adverse effects reported are myelosuppression (eg, neutropenia, thrombocytopenia), gastrointestinal upset, and hepatoxicity.6 Previous studies3,11,12 have reported a 78% to 83% response for a duration of 94 to 106 days in dogs receiving lomustine. Overall, epitheliotropic cutaneous lymphoma has a poor prognosis. However, dogs with solitary lesions or multiple lesions treated with chemotherapy tend to have a longer survival time.3

Prior to initiating treatment, oncology referral and abdominal and thoracic diagnostic imaging were recommended for the dog of the present report. Due to limited finances, the dog underwent lomustine and methylprednisolone treatment without staging. In addition, to treatment with lomustine and methylprednisolone, administration of S-adenosylmethionine was initiated for hepatic protection. A CBC and biochemical panel were performed (Antech Diagnostics Inc) 1 week after each dose of lomustine to monitor for neutropenia, thrombocytopenia, and hepatotoxicity. Bloodwork was also performed before administering the next dose 3 weeks later. This patient did not develop leukopenia, thrombocytopenia, or anemia for the duration of treatment. A clinical pathologist reviewed a peripheral blood smear prior to starting lomustine, and there were no abnormalities reported on RBC and WBC morphology. This patient developed mildly high activities of alkaline phosphatase and alanine transferase, which resolved with reducing the frequency of methylprednisolone from daily to every other day. One month into the treatment, the crusting had resolved and the erythroderma and scaling had markedly improved. Shortly afterward, the patient developed ulcerations and erosions of the paw pads that rapidly progressed resulting in poor quality of life. The patient was euthanized 2 months after initiating lomustine and methylprednisolone treatment. Necropsy was not performed.