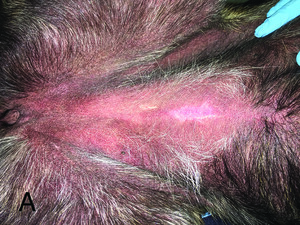 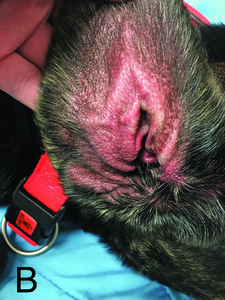 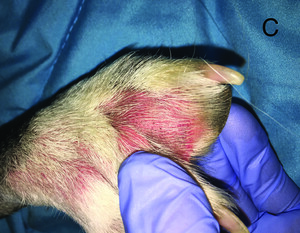 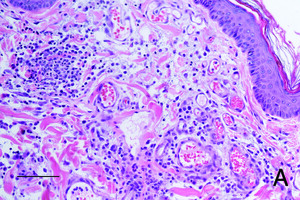 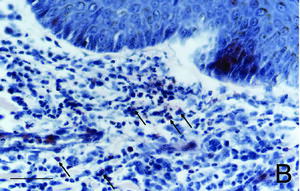 A 19-month-old 27.7-kg spayed female mixed-breed dog was referred for evaluation of nonpainful, nonpruritic acute generalized cutaneous erythema of a 1-week duration. The dog had become febrile and anorexic and had 1 episode of vomiting 2 days after the development of the skin lesions. The patient was apparently healthy preceding this event. There was no recent diet change or administration of medications, vaccinations, or supplements. One week prior to referral, diphenhydramine (1.8 mg/kg, PO, q 12 h) and prednisone (0.7 mg/kg, PO, q 24 h) had been administered for a suspected allergic condition. Due to lack of improvement, the patient was evaluated at an emergency animal hospital 3 days prior to referral and was noted to be lethargic, febrile (39.3 °C; reference range, 38.0 to 39.2 °C), and approximately 5% dehydrated. A CBC and biochemical panel were performed, and no clinically important abnormalities were observed. The dog received 1 dose of dexamethasone and diphenhydramine (dose and route not known) along with electrolyte fluids (Normosol-R; Hospira, Inc; 1 L, SC) and continued treatment with oral administration of diphenhydramine and prednisone. Due to a lack of improvement, the patient was referred for further evaluation.

On referral examination, the dog was lethargic, mildly dehydrated, no longer febrile, and still receiving the previously prescribed oral administration of diphenhydramine and prednisone. There was generalized moderate to severe cutaneous erythema and nonpitting edema, most noticeable on the glabrous skin of the abdomen, concave pinnae, and interdigital spaces (Figure 1). Diascopy revealed blanching of the skin indicating erythema from vascular engorgement and no skin hemorrhage.1

Three 8-mm and two 6-mm skin biopsy samples were obtained from the dog’s axillary and inguinal regions, placed in neutral-buffered 10% formalin, and submitted for histopathology. Samples were routinely processed and embedded in paraffin, and then 5-µm-thick sections were stained with H&E stain. Histologic examination of the tissue sections revealed perivascular to interstitial dermal inflammatory infiltration composed predominantly of eosinophils and neutrophils with lower numbers of macrophages and mast cells. The inflammatory infiltration extended multifocally to the mid dermis and frequently surrounded the adnexal structures. There was mild to moderate vascular ectasia that contained increased numbers of polymorphonuclear cells and mild to moderate edema in the superficial dermis (Figure 2). The proportion of eosinophils to neutrophils was variable with some areas exhibiting primarily eosinophilic infiltration, whereas neutrophils predominated other areas. To highlight the eosinophils, Luna staining was performed. No infectious microorganisms were identified.

The patient’s history, clinical features, and histopathologic findings are consistent with the diagnosis of canine acute eosinophilic dermatitis and edema (CAEDE) or Wells-like syndrome (WS).2

CAEDE is an infrequent disorder in dogs that is typically characterized by sudden onset of generalized erythema; erythematous macules, plaques, or both; and dermal edema.2–6 It is often associated with gastrointestinal (GI) signs.2–6 CAEDE has been compared to WS or eosinophilic cellulitis in humans.2–6 Patients with WS develop edematous, erythematous plaques that are often pruritic and painful. The cutaneous lesions typically persist for months to years with recurrent episodes.4,7 The etiology and pathogenesis of WS are unknown but thought to be a hypersensitivity reaction to bacterial, viral, or parasitic infections; drugs; vaccines; or arthropod bites.7 In addition, some cases are associated with underlying neoplasia, and others are considered idiopathic.7 Eosinophil dysregulation and increased production of interleukin-5 by T cells have been found in patients with WS and are thought to contribute to the abnormal tissue accumulation of eosinophils.7

CAEDE differs from WS in that the clinical signs of CAEDE are acute, often resolve within a few weeks after treatment, and frequently occur with GI signs.2–6 However, there have also been single case reports7–9 of ulcerative colitis and giardiasis in people with WS. Due to the differences in disease presentation between canine and human patients, CAEDE is the preferred terminology for this distinctive syndrome.3

The triggers of CAEDE are also unknown but proposed to be a systemic hypersensitivity reaction to food, arthropod bites, or drugs (metronidazole).2–5 A retrospective study3 including 29 dogs shows that greater than 50% of the dogs developed signs of CAEDE during treatment for severe vomiting and diarrhea. The majority of the patients had received several medications to treat GI disease but only 6 had a positive drug score.3 In the retrospective study by Bradley and collaborators,5 80% (24/30) of the dogs with CAEDE had GI signs. In another retrospective study4 of 18 dogs, most animals had vomiting and hematochezia with skin lesions that developed either concurrently or after the onset of the GI signs; however, 3 dogs developed skin lesions prior to the GI signs. All dogs in that study had received either 1 or multiple medications including antimicrobials (metronidazole, cephalexin) and gastroprotectants (antiemetics, proton pump inhibitors, H2-receptor antagonists), with a positive drug score using the Naranjo algorithm in only 8 dogs. The dog of the present report did not receive any previous medications and vaccinations or had a diet change prior to the onset of skin lesions.

The diagnosis of CAEDE should take into consideration a compatible history, characteristic clinical features, and the presence of a dermal eosinophilic inflammatory infiltrate on histology. Differential diagnoses for CAEDE include sterile neutrophilic dermatosis (SND) or Sweet-like syndrome, vasculitis, coagulopathy with ecchymoses, erythema multiforme, and urticaria if facial swelling or edema is present.2,4 Canine atopic dermatitis can be associated with acute, generalized erythema; however, edema is not noted clinically. In addition, pruritus is a consistent sign of atopic dermatitis but it is less common in CAEDE, and eosinophils, when present on histology of atopic dogs, are typically in low numbers.2,5 The eosinophilic infiltrate in CAEDE can vary widely from mild to severe, with or without the presence of neutrophils and collagen flame figures, which are remnants of eosinophils and their granules that surround dermal collagen.2–5 With the varied severity of eosinophilic infiltrate in CAEDE, 3 histologic patterns were described by Cain et al.2,6 Pattern 1 had mild eosinophilic and neutrophilic inflammation that was localized to the superficial dermis with mild to moderate edema, pattern 2 had more extensive eosinophilic inflammation and edema that extended into the deep dermis, and pattern 3 had severe and diffuse eosinophilic and neutrophilic dermal inflammation with collagen flame figures and edema.2,6 For the dog of the present report, the histopathologic findings of perivascular to interstitial dermal inflammatory infiltration composed predominantly of eosinophils and neutrophils with edema fit with a diagnosis of CAEDE and were most consistent with histologic pattern 2.

The dog of the present report had some features of SND, including generalized erythema and edema, neutrophilic inflammatory infiltrate, and history of pyrexia. SND is a rare disease in dogs with only a few reported cases.5,10–13 It has features similar to acute febrile neutrophilic dermatosis or Sweet syndrome in humans.14 Sweet syndrome is characterized by pyrexia; neutrophilia; painful erythematous papules, nodules, and plaques; and neutrophilic infiltration within the upper dermis.5,14 The etiology of Sweet syndrome is unknown but thought to be an antigen-induced T-cell–mediated immune reaction to drugs, upper respiratory disease, GI disease, or neoplasia, with idiopathic cases also reported.5,15 The presentation of SND in dogs includes erythematous papules, pustules, plaques; generalized erythema; and histologic SND.5,10–13 The extracutaneous signs of SND include pyrexia, peripheral lymphadenopathy, neutrophilia, anemia, pneumonia, lameness, and arthralgia.5,10,12,13 In a retrospective study5 of SND, lameness, arthralgia, and immune-mediated polyarthropathy were found in 50% of the affected dogs. The triggering causes are unknown; however, cases of SND following the administration of carprofen have been reported.12,14

Distinguishing CAEDE from SND on histopathology can be challenging because eosinophils can degranulate and be difficult to differentiate from neutrophils.2,5 Luna histochemical stain can be performed to highlight the eosinophils,2,5 as was performed in the present case. However, eosinophils have been reported to be part of the inflammatory process of SND, making the histopathologic distinction of the 2 disorders difficult.2,5 It is possible that CAEDE and SND represent clinical and histological variations of the same inflammatory skin disease.2,5 As these syndromes have similar triggers, clinical presentation, treatment, and outcome, the distinction between them may not be imperative.5

Treatment of CAEDE includes drug withdrawal if a cutaneous drug reaction is suspected and, most often, administration of corticosteroids and antihistamines for treatment of dermatitis, along with medications for the GI disease.2,3 The GI signs frequently improve prior to the resolution of the skin lesions, with skin lesions resolving by approximately 3 weeks after onset of treatment.2,3 Prognosis of CAEDE is good to fair with rare reports of recurrence of the skin lesions.2–4

The patient of the present report was started on an immunosuppressive dose of prednisone (2.7 mg/kg, PO, q 24 h), diphenhydramine (1.8 mg/kg, PO, q 12 h), famotidine (1 mg/kg, PO, q 12 h), and sucralfate (26.5 mg/kg, PO, q 8 h). Due to the presence of mild dehydration and decreased appetite, the patient received electrolyte fluids (Normosol-R; Hospira, Inc; 1 L, SC) and maropitant (1 mg/kg, IV). After 5 days of treatment, the erythema and edema had reduced substantially. Reevaluation 10 days after initial presentation revealed only mild erythema of the interdigital skin and concave pinnae and improved attitude. Treatment with prednisone and gastroprotectants was slowly tapered over 4 weeks and then discontinued. The patient recovered well with no recurrence of skin lesions or GI signs at 2 months after treatment discontinuation.

Clinicians should consider CAEDE as a differential diagnosis for acute generalized cutaneous erythema and edema with or without GI signs in dogs. The clinical diagnosis should be confirmed by supportive histopathologic features before appropriate treatment is instituted.