Photomicrographs of fine-needle aspirate samples of an invasive maxillofacial mass in a 9-month-old sexually intact male Boxer. A—The sample is hemodiluted and contains moderate numbers of degenerate neutrophils surrounding clusters of large, atypical round cells. Modified Wright stain; bar = 50 µm. B—A small cluster of round cells with low amounts of deep blue cytoplasm, sometimes with fine vacuolation and cytoplasmic blebbing and an eccentric round nucleus with smooth chromatin and multiple irregular nucleoli. A degenerate neutrophil (arrow) is in the center of the image and contains multiple 1- to 2-µm-long coccobacilli within its cytoplasm. Modified Wright stain; bar = 20 µm.

Photomicrographs of fine-needle aspirate samples of an invasive maxillofacial mass in a 9-month-old sexually intact male Boxer. A—The sample is hemodiluted and contains moderate numbers of degenerate neutrophils surrounding clusters of large, atypical round cells. Modified Wright stain; bar = 50 µm. B—A small cluster of round cells with low amounts of deep blue cytoplasm, sometimes with fine vacuolation and cytoplasmic blebbing and an eccentric round nucleus with smooth chromatin and multiple irregular nucleoli. A degenerate neutrophil (arrow) is in the center of the image and contains multiple 1- to 2-µm-long coccobacilli within its cytoplasm. Modified Wright stain; bar = 20 µm.

Necropsy image of the isolated skull tissues and maxillofacial mass of the dog described in Figure 1. The neoplasm is poorly demarcated and invasive, filling the ventral aspect of the right orbit and wrapping around the right zygomatic arch. 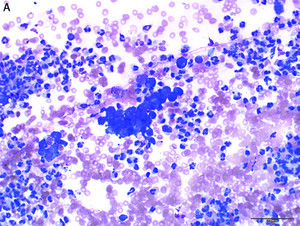 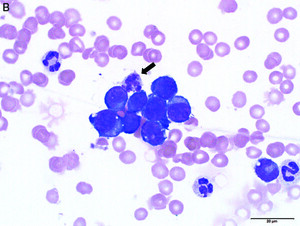 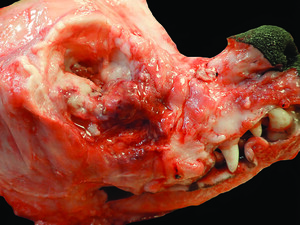 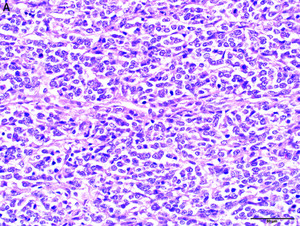 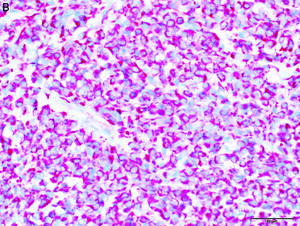 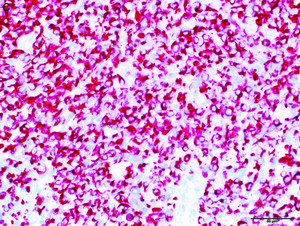 A 9-month-old sexually intact male Boxer was referred to the Ontario Veterinary College for evaluation of a rapidly progressive and seemingly painful mass along the right lateral aspect of the head and maxilla. The mass was first noticed approximately 3 weeks prior to presentation and did not improve following antimicrobial and corticosteroid treatment prescribed by the referring veterinarian. A sample of the mass collected by the referring veterinarian was cultured and yielded growth of Pasteurella spp bacteria.

Oral examination revealed a large, proliferative mass on the caudal aspect of the right maxilla that elicited signs of pain on palpation. A CT examination of the head revealed an invasive, poorly demarcated, heterogeneously soft tissue–attenuating mass that was centered on the right retrobulbar space and zygomatic arch and that resulted in severe right exophthalmos. The mass was heterogeneously contrast enhancing and also contained non–contrast-enhancing regions of fluid attenuation. There was lysis of the right zygomatic bone, maxilla, and palatine bone, where the mass extended into the oral cavity and right nasal passage. One of the right mandibular lymph nodes was moderately enlarged and nodular.

Fine-needle aspirate samples of the mass were examined (Figure 1). The cytologic preparation was moderately cellular with a hemodiluted and clotted background. There were moderate numbers of degenerate neutrophils often containing mixed bacteria, admixed with small clusters of large, atypical round cells. These cells had small amounts of deep blue cytoplasm, sometimes with fine vacuolation and cytoplasmic blebbing, and an eccentric round nucleus with smooth chromatin and multiple irregular nucleoli. When individualized, these cells resembled large lymphocytes.

The cytologic interpretation was a poorly differentiated neoplasm with septic suppurative inflammation. Based on the patient’s young age, differential diagnoses included a rhabdomyosarcoma, an embryonal neoplasm, an undifferentiated malignant tumor of the oral cavity, and a sarcoma of dental follicular mononuclear cells. The latter 2 are rarely reported neoplasms.1,2 Lymphoma was deemed unlikely due to the clustering nature of these cells. Due to the poor quality of life and presumably poor prognosis, the owners elected euthanasia and necropsy.

On gross examination, an invasive soft tissue neoplasm filled the ventral aspect of the right orbit, displacing the globe anteriorly. The mass invaded through the right maxillary bone and into the oral cavity, wrapped around the right zygomatic arch, and extended into the right side of the nasal and oral cavities. Neoplastic tissue was white to gray and multilobulated (Figure 2). The right mandibular lymph node contained a well-demarcated, firm, tan nodule that measured approximately 0.8 X 0.5 X 0.5 cm, consistent with metastasis.

Histopathologically, the mass was invasive and multilobular, and about 20% was necrotic. There were short interlacing streams of round to spindle-shaped cells and occasionally sheets of individualized cells separated by preexistent collagen bundles (Figure 3). Neoplastic cells had variably distinct cell borders, a moderate amount of eosinophilic cytoplasm, and a round to oval nucleus with finely stippled chromatin and 1 or 2 indistinct nucleoli. There was 3-fold anisokaryosis and anisocytosis and 230 mitotic figures in 10 hpfs (2.37 mm2). Hemorrhage, degenerate neutrophils, foamy macrophages, and aggregates of bacterial cocci were also noted. Neoplastic cells effaced approximately 50% of the right mandibular lymph node. Neoplastic cells were immunoreactive to vimentin (Clone V9, dilution 1:1,200; Dako, Agilent Technologies) and desmin (Clone D33, dilution 1:200; Dako, Agilent Technologies), and immunonegative for muscle-specific actin, Melan A, PNL2, pancytokeratin, and S-100.

Based on the patient’s age, location, microscopic findings, and immunohistochemistry, the neoplasm was compatible with a rhabdomyosarcoma, specifically a solid pattern alveolar rhabdomyosarcoma.

Rhabdomyosarcomas are uncommon neoplasms with variable phenotypes. Skeletal muscle differentiation is frequently not identified on light microscopy, often resulting in erroneous diagnoses such as lymphoma, round cell tumor, or primitive neoplasm.3–5 Therefore, adjunct diagnostic modalities such as electron microscopy or immunohistochemistry are commonly required to confirm a diagnosis of rhabdomyosarcoma. Results of immunohistochemistry are variable depending on the degree of differentiation, but detection of muscle-specific markers supports the diagnosis. In dogs, rhabdomyosarcomas are typically immunoreactive to vimentin, desmin, muscle actin, and sarcomeric actin.3 In less differentiated rhabdomyosarcomas, myoblast determination protein 1 (MyoD1) and myogenin may be useful markers.3,5 In this particular case, neoplastic cells were immunopositive for vimentin and desmin, but not for muscle actin. It is not uncommon for rhabdomyosarcomas to vary in terms of the muscle-specific marker expressed, due to varying degrees of differentiation and variations in myogenic regulating factor expression, and detection of at least 1 muscle-specific marker is typically sufficient for a diagnosis.3

Undifferentiated malignant tumor of the oral cavity and sarcoma of dental follicular mononuclear cells were initial considerations because both of these types are rare, aggressive, and undifferentiated or poorly characterized tumors that affect the maxilla of young dogs. Undifferentiated malignant tumor of the oral cavity is a neoplasm of undetermined type.1 It was reported in 6 dogs, whereby the neoplasm rapidly invaded the maxilla, orbit, or both in dogs under 2 years of age. In most cases, patients were euthanized due to metastasis and rapid tumor growth.1 That report described negative results for immunohistochemistry for cytokeratins, epithelial membrane antigen, vimentin, actin, myosin, and desmin, which suggests a difference with the present case, based on our immunohistochemical findings.1 Sarcoma of dental follicular mononuclear cells is an extremely rare condition with a single case report.2 In that report,2 a 5-month-old dog had multiple vimentin-positive neoplasms arising from within the dental follicles of multiple teeth. That presentation differed from the dog of the present report, making that condition unlikely for the dog of the present report.

Primitive neuroectodermal tumors (PNETs), which encompass a variety of embryonal neoplasms arising from the nervous system, can also have a similar round cell morphology on cytology, mimicking the appearance of lymphocytes.7 These neoplasms have the potential to be malignant and are typically associated with the central nervous system, although peripheral forms arising from neural tissue in soft tissues or bone, termed peripheral PNETs, are rarely noted.8 Histologically, these neoplasms can form rosettes or rosette-like structures, with neoplastic cells palisading around blood vessels or clear central spaces.9 Immunohistochemical reactivity for neural or glial markers, such as neuron-specific enolase, neurofilament, glial fibrillary acidic protein, synaptophysin, and S-100, can support the diagnosis but is variable depending on the degree of differentiation and is not specific for PNETs.7–9 Identifying intracytoplasmic, electron-dense neurosecretory granules on electron microscopy can confirm the diagnosis, but this testing modality is not always readily available.8 The absence of rosettes or cellular palisades on histology, as well as the immunohistochemical findings, which included immunopositivity for the muscle marker desmin, favored the diagnosis of a rhabdomyosarcoma rather than a PNET in the present case.

Melanoma was considered due to the presence of an aggressive neoplasm involving the oral cavity, but immunonegativity for Melan A, PNL2, and S-100 was not compatible with a melanoma. Additionally, immunopositivity for desmin would not be expected for melanoma. The cytologic appearance, although often variable in melanomas, was also not typical for that diagnosis.

In conclusion, neoplasms with poorly differentiated round cells affecting the head of young dogs should include rhabdomyosarcoma as a differential diagnosis. This case highlighted how neoplastic cells can be round and resemble large lymphocytes, which can create a diagnostic challenge. Additional diagnostic tests such as immunochemistry are often required for a more precise diagnosis.