Photograph of a 16-cm-diameter, irregular, poorly demarcated, ulcerated, epidermal to dermal mass over the left dorsolateral hip region of a 13-year-old dog. The mass had previously been surgically excised twice and recurred after each procedure.

Photomicrograph of an impression smear from the mass. Note the single dense cluster of basaloid epithelial cells with high nucleus-to-cytoplasm ratios. The cells exhibit mild anisokaryosis and have round nuclei with coarse chromatin and variably prominent nucleoli as well as small amounts of lightly basophilic cytoplasm. Wright-Giemsa stain; bar = 20 µm.

Photomicrographs of punch biopsy specimens from the mass. A—Nests of neoplastic epithelium are composed of primarily neoplastic basal cells with differentiation to all 3 segments of the hair follicle. H&E stain; bar = 250 µm. B—Lower-magnification image of the neoplastic nests. The nests are surrounded by prominent desmoplasia with mild to moderate secondary mixed inflammation. H&E stain; bar = 500 µm.

Photomicrograph of a section of the mass following surgical removal. Nests and islands of neoplastic cells similar to those seen in the punch biopsy specimens expand the dermis and subcutis. The neoplastic nests are surrounded by mild to moderate secondary mixed inflammation. H&E stain; bar = 250 µm. Inset—The neoplastic epithelial cells have differentiated into a superficial layer of squamous epithelium with or without trichohyaline granules (arrow). H&E stain; bar = 50 µm. 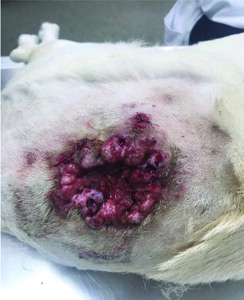 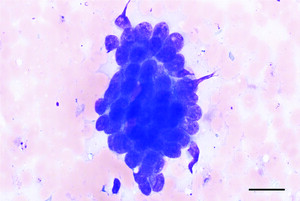 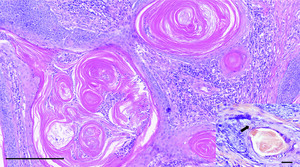 A 13-year-old 26.2-kg spayed female mixed-breed dog was evaluated because of a 2-year history of a mass in the left dorsolateral hip region. The mass had been surgically excised twice and recurred after each procedure. A provisional diagnosis of sebaceous adenoma had been made, but the method by which this diagnosis had been made was unknown, and histologic examination had never been performed. The recurrent mass had been stable in size but had become ulcerated for the first time a few months prior to presentation. The dog was otherwise healthy.

On physical examination, the dog had a body condition score of 7/9 and normal vital signs; results of cardiac and thoracic auscultation were normal. A 16-cm-diameter, irregular, poorly demarcated, ulcerated, epidermal to dermal mass was present over the left dorsolateral hip region. The mass was ring-shaped, with multiple nodules surrounding a central ulcer. The surrounding dermis was palpably indurated in some areas. The mass extended from the dorsal aspect of the left iliac wing cranially toward the left flank and distally toward the lateral surface of the thigh (Figure 1). No peripheral lymphadenomegaly was identified.

Cytologic examination of impression smears from the dermal mass revealed low to moderate numbers of nucleated cells with many RBCs. The nucleated cells consisted primarily of basaloid epithelial cells arranged in tight cohesive clusters (Figure 1). These cells had high nucleus-to-cytoplasm ratios with only small amounts of basophilic cytoplasm; the nuclei were round to oval with coarse chromatin and a single, variably prominent, round nucleolus. Anisokaryosis was mild. Associated with clusters of these basaloid epithelial cells were low numbers of anucleated keratinocytes and ghost keratinocytes (ie, anucleated keratinocytes with a central clearing corresponding to a faded nucleus) indicative of matrical keratinization of the hair bulb. Rare cholesterol crystals and small amounts of basophilic granular material, consistent with necrosis, were present in the background. Given the predominance of basaloid epithelial cells that were sometimes closely associated with keratinocytes, the cytologic interpretation was a follicular neoplasm with necrosis.

Five 6-mm-diameter punch biopsy specimens were collected for histopathologic examination, including 1 from indurated haired skin adjacent to the mass and 4 from nodules at the periphery of the lesion. Tissues were fixed in formalin, embedded in paraffin, and sectioned, and sections were stained with H&E stain (Figure 3). The 4 biopsy specimens from nodules contained a dermal, nonencapsulated, poorly circumscribed, multilobulated, infiltrative lesion composed of neoplastic basal cells arranged in cysts, small nests, and occasional trabeculae that were surrounded by prominent intradermal desmoplasia with mild to moderate infiltrations of neutrophils, lymphocytes, and plasma cells. Neoplastic cells were characterized by indistinct cell borders, abundant basophilic cytoplasm, and round to oval nuclei with coarsely stippled chromatin and 1 or 2 small nucleoli. Anisocytosis and anisokaryosis were moderate to marked. The mitotic index was high (47 mitoses/2.37 mm2, equivalent to 10 hpf with an FN22/40X objective) with occasional bizarre mitotic figures. Approximately 20% of the neoplastic nests contained squamous differentiation. The lesion was interpreted to be an adnexal tumor, with differentiation into all 3 segments of the hair follicle in certain areas. Although trichogenesis was present, it was incomplete or abortive. Findings were most consistent with a diagnosis of malignant trichoepithelioma. The biopsy specimen from the indurated haired skin adjacent to the mass revealed inflammation in the deep dermis without evidence of neoplasia.

Given the malignant nature of the mass, thoracic radiography and abdominal ultrasonography were recommended. Thoracic radiographs were unremarkable. Abdominal ultrasonography revealed an asymmetric and slightly enlarged left medial iliac lymph node. Results of cytologic examination of an aspirate sample were consistent with reactive lymphoid hyperplasia without evidence of metastasis.

Wide surgical resection of the tumor was recommended. Initially, lateral margins of 2 cm and a deep margin of 1 fascial plane were planned. However, because indurated tissue associated with the mass extended into the cutaneous trunci muscle, the depth of the excision was increased to remove both the affected portion of the cutaneous trunci muscle and 0.5 cm of underlying fat.

The mass was submitted for histopathologic examination. Tissue samples were routinely processed, and sections were stained with H&E stain (Figure 4). On histologic examination, the dermis and subcutis were markedly expanded by an infiltrative neoplasm similar to that seen in the previous biopsy specimens. The trabeculae of the neoplastic cells occasionally connected with the overlying epidermis. There was differentiation into all 3 segments of the hair follicle and substantial desmoplasia. Islands of neoplastic cells were composed of basophilic epithelial cells with indistinct cell borders and a central space filled with keratinized (ghost) cells, representing matrical differentiation, or consisted of a superficial layer of squamous epithelium with or without trichohyaline granules that progressed to lamellar keratinization toward the center of the islands. Neoplastic cells extended to the caudal surgical margin. Findings were consistent with the previous diagnosis of malignant trichoepithelioma. Because excision was incomplete, revision surgery was recommended, but the owners declined.

Malignant trichoepithelioma (matrical carcinoma) arising from the left caudal dorsum in a dog.

Trichoepitheliomas exhibit differentiation into all 3 parts of the hair follicle structure: the upper portion or infundibulum, the middle portion or isthmus, and the lower or inferior portion.1–3 These tumors are found commonly on the dorsal aspect of the trunk, neck, and tail, with a greater incidence in females than males.1,2 Predisposed breeds include Basset Hounds, English Coonhounds, Bullmastiffs, and Persian cats.1,2,4 Cytologically, trichoepitheliomas are composed of keratinized basaloid epithelial cells. They may also have a cytologic appearance similar to that of follicular cysts, consisting of keratinized anucleated to nucleated squamous epithelial cells.5 Accumulation of keratin and ghost (shadow) cells within islands of epithelial cells is suggestive of matrical differentiation.4 Histologically, there is considerable variation in the appearance of these neoplasms, although they are all characterized by trichogenic differentiation.3 This hallmark of trichoepitheliomas manifests as keratinization consistent with various components of the hair follicle.1–4 In normal hair follicles, the infundibulum consists of an outer root sheath epithelium that is histologically similar to the epidermis with lamellar keratinization.2 The outer root sheath epithelium of the isthmus has a tricholemmal keratinization pattern, composed of smaller keratinocytes without a granular cell layer producing amorphous keratin.2 During anagen, the lower or inferior portion of the hair follicle is composed of an outer root sheath with marked cytoplasmic glycogenation, an inner root sheath with brightly eosinophilic intracytoplasmic trichohyalin granules, and the hair bulb containing keratinized matrix cells (ghost or shadow cells).2,3 Most trichoepitheliomas are benign, and surgical excision tends to be curative. However, malignant versions of these tumors exist, as observed in the present case.1,3

Malignant trichoepitheliomas are rare tumors, comprising < 1% of follicular tumors, and have been described in both dogs and cats.1–3,6 They tend to be larger than benign trichoepitheliomas and are typically asymmetrical, poorly circumscribed, and invasive.2,7,8 Epithelial necrosis, nuclear and cellular pleomorphism, atypical mitoses, and lymphatic invasion may be seen.8 Common sites include the dorsal aspect of the trunk and the limbs, thorax, neck, and tail, with the typical age of affected individuals ranging from 8 to 12 years.2,4 Histologically, the matrical cells have scant cytoplasm, large ovoid nuclei, one or more nucleoli, moderate to high mitotic activity, and nuclear and mitotic atypia.2 Mitotic activity can range from low to high in the matrical cell population and can be absent in nonbasaloid cell areas.8 The islands of matrical cells often contain keratinized ghost cells or areas of necrosis.1,2

Malignant trichoepitheliomas are locally invasive with metastatic potential, and the prognosis based on available reports is guarded.1–4 However, only a few retrospective studies have evaluated these uncommon malignancies, and the criteria used for defining benign versus malignant follicular tumors are inconsistent. Therefore, the true metastatic potential and overall prognosis of malignant trichoepitheliomas are unknown. Local recurrence has been reported and likely occurred in this case.2,3 Although staging tests in our patient did not uncover metastases, distant spread has been reported with malignant trichoepitheliomas identified in bones, lymph nodes, spleen, liver, lungs, and urinary bladder.1–4,8 Surgical excision with wide margins around the primary tumor and removal of metastatic lymph nodes is ideal; however, when locoregional control is not possible, palliative radiation therapy may be beneficial.9

Although revision surgery and regular recheck examinations to monitor for recurrence and metastasis were recommended, the owner declined further treatment, and the dog was lost to follow up. The mass was initially considered to be benign on the basis of unknown criteria, and a biopsy sample was never submitted for histopathologic examination. The subsequent aggressive behavior of this tumor reinforces the need for histopathologic examination even when a tumor is presumed to be benign and especially when a tumor has recurred.