Photograph of the open coelomic cavity of a 2.5-year-old sexually intact female Partridge Plymouth Rock chicken that died. The ovary is enlarged and severely lobulated with white-opaque, fluid-filled, yellow translucent, and dark-red opaque lobules. The size of these lobules ranges from 0.1 × 0.1 × 0.1 to 3 × 2.5 × 1.5 cm. 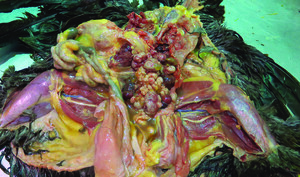 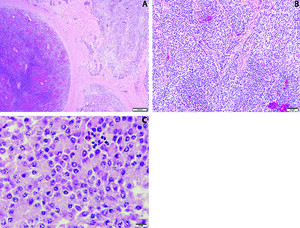 A 2.5-year-old sexually intact female Partridge Plymouth Rock chicken was presented to a private practice because of listlessness and separation from the flock. The hen died during radiographic imaging of the coelomic cavity and was subsequently submitted for necropsy.

The lateral coelomic radiograph demonstrated increased soft tissue opacity dorsally, with loss of detail. The ventriculus contained grit and was displaced ventrally. At necropsy, dried feces and urates coated the feathers around the vent, and the body had decreased visceral fat stores. The coelomic cavity contained approximately 250 mL of opaque, serous, green to yellow fluid. The ovary was markedly enlarged and multilobulated (Figure 1). The lobules were mottled-white opaque, yellow translucent, and dark-red opaque. These lobules varied in consistency, ranging from soft and fluid filled to firm. The sizes of these lobules ranged from 0.1 X 0.1 X 0.1 to 3 X 2.5 X 1.5 cm. Similar nodules were identified on the kidneys, pancreas, omentum, the remaining portions of the reproductive tract, air sacs, and adipose tissue. The liver was friable, with multifocal pale-tan streaks on its surface.

Samples from the ovary and pancreas were fixed in neutral-buffered 10% formalin and processed routinely, and sections were stained with H&E stain. Histologically, the ovarian parenchyma was expanded, with a densely cellular, poorly demarcated, unencapsulated, infiltrative neoplasm composed of diffuse neoplastic glandular acini and ducts supported by a fine fibrovascular stroma. These neoplastic glandular epithelial cells contained oval vesiculate nuclei with chromatin stippling and a moderate amount of eosinophilic cytoplasm. Clusters of glandular epithelial cells contained strongly eosinophilic granules within the cytoplasm in H&E-stained sections. Because these granules were strongly positive with periodic acid–Schiff staining and negative with mucicarmine staining, they were interpreted as ovalbumin granules. The pancreas was surrounded by thick, eosinophilic fibrous tissue of the mesoduodenum, and neoplastic epithelial glandular cells—similar to those in the ovary—were adhered to and invading the mesoduodenum (Figure 2).

Adenomas in the ovary and oviduct are more frequent in chickens older than 2 years of age.2 Older broiler breeding females and turkeys can also develop these types of tumors, but the rate of occurrence is less than in layer chickens.1

Adenocarcinomas can affect the ovary, oviduct, or both. More frequently, the ovary and oviduct are affected simultaneously, with 50% to 60% of cases having both organs affected. Ovarian and oviductal adenocarcinomas are histologically indistinguishable, and both produce ovalbumin, so they are difficult to differentiate in hens in which both the ovary and the oviduct are affected.1

Other forms of neoplasia that can affect the avian female reproductive tract include round cell tumors such as lymphoma. Marek disease can result in a proliferative infiltrate of heterogenous lymphocytes.1 Lymphoid leukosis virus can result in a proliferative infiltrate of large lymphoblasts. These viruses can result in focal to diffuse tumors affecting other abdominal organs. Other differential diagnoses include sex cord and gonadostromal tumors, most frequently granulosa cell tumors, arrhenoblastomas, leiomyomas affecting the oviduct, and mesotheliomas. Non-neoplastic differential diagnoses for reproductive disease include cystic right oviduct, egg-related coelomitis, and egg binding.1,4

Chickens have been used as experimental models for human ovarian cancer because of their similar histological subtypes as well as their metastatic potential and staging. Recent research has focused on a potential link between inflammation and the spontaneous development of ovarian cancer in both hens and humans. One study5 found that messenger RNA expression of caspase 1, interleukin (IL)-1B, and IL-18 was greater in hens with ovarian cancer, compared with expression in hens with normal ovaries. In the same study, immunohistochemical analysis found qualitatively greater protein expression of caspase 1, IL-1B, and IL-18 in hens with ovarian cancer. Another risk factor for development of ovarian adenocarcinomas is polycystic ovarian syndrome, which is also linked with chronic inflammation and oxidative stress.6

Layer hens have been selected genetically to be persistent ovulators, with ovulation intervals of approximately 24 hours. In addition, hens develop ovarian adenocarcinoma spontaneously and at a high rate.7 This high spontaneous rate and narrow age range of 2 to 4 years make hens an advantageous experimental animal for studying human ovarian cancer, especially methods for early disease detection and development of diagnostic markers for ovarian adenocarcinoma.8,9