Photographs of (A) the stomach (*) and liver (†), and (B) the kidneys (‡) and fat bodies (§) in a 3-year-old bearded dragon (Pogona vitticeps) with progressive anorexia and lethargy that was euthanized after a gastric mass and multiple hepatic masses were identified by ultrasound. A—The orad portion of the stomach (*) had a focal 2 × 1 × 0.8-cm multinodular, smooth, firm, pale-tan mass, and disseminated throughout the liver (†) were numerous multifocal to coalescing, firm, pale-tan, round to irregularly oval, discrete, 0.2- to 1.8-cm-diameter masses. B—Similar masses were seen in the kidneys (‡) and fat bodies (§). 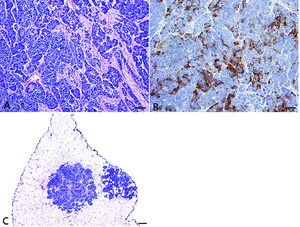 A 3-year-old 400-g sexually intact male bearded dragon (Pogona vitticeps) was presented to the University of Tennessee College of Veterinary Medicine exotic medicine and surgery service for a chronic history of progressive anorexia and lethargy.

On gross examination, the coelom had 2.6 mL of orange, translucent, viscous fluid. The gastric mucosa adjacent to the cardia had a 2 X 1 X 0.8-cm multinodular, smooth, firm, pale-tan mass (Figure 1). The liver was pale-yellow to orange and approximately 10 times the expected size, and it weighed 126 g, or approximately 31.5% of the animal’s body weight. Disseminated throughout the liver were numerous multifocal to coalescing, firm, pale-tan, round to irregularly oval, discrete 0.2- to 1.8-cm-diameter masses that were occasionally umbilicated on cut surface. Similar masses were disseminated throughout the kidneys, coelomic fat bodies, coelomic membrane, omentum, spleen, and right hypaxial muscles of the tail.

Portions of the stomach, liver, kidneys, coelomic fat bodies, spleen, tail muscles, pancreas, and heart were fixed in neutral-buffered 10% formalin and processed routinely, and sections were stained with H&E stain for histologic examination. Expanding and effacing the gastric submucosa, compressing the adjacent mucosa, and extending into the muscularis externa was an unencapsulated, well-demarcated neoplasm composed of trabeculae, cords, and packets of neoplastic polygonal cells within a moderate fibrovascular stroma (Figure 2). Neoplastic cells had indistinct cell borders, scant to moderate amounts of pale eosinophilic cytoplasm, a round to oval nucleus with coarse chromatin, and indistinct nucleoli. Anisocytosis and anisokaryosis were mild, with rare cells and nuclei up to 6 times the size of adjacent neoplastic cells and nuclei. There were 30 mitotic figures/10 hpf (at 400X magnification). A few lymphatics within the submucosa were filled with islands of neoplastic cells.

Somatostatin-producing tumors in humans cause a syndrome known as somatostatinoma syndrome. In these patients, concurrent hyperglycemia, diabetes mellitus, anemia, and gallstones develop.13–15 Local gastrointestinal effects include decreases in gastric emptying; smooth muscle contractions; and insulin, glucagon, gastrin, secretin, and pancreatic zymogen granule release.13–15 The inhibition of insulin and glucagon release is the proposed mechanism for the development of hyperglycemia in humans through an inability to decrease circulating blood glucose concentrations and decreased hepatic gluconeogenesis, respectively. The cause of anemia in somatostatinoma syndrome remains unclear, but it is speculated to be paraneoplastic anemia or anemia of chronic inflammation.13,15 Both anemia and hyperglycemia have been reported in bearded dragons with somatostatin-immunoreactive gastric neuroendocrine carcinomas,3,5 as in this case, and the condition has been suggested to be similar to somatostatinoma syndrome in humans. Although cholelithiasis is reported in somatostatinoma syndrome in humans, it was not present in this case or in the previously reported bearded dragons with neuroendocrine carcinomas.