Photographs of an 8.5-year-old castrated male German Shepherd Dog evaluated because of a 6-month history of progressive depigmentation, crusting, and ulceration of the nasal planum (A), as well as gingival lesions and crusting, erosive, and ulcerative lesions on the lip margins (B).

Photographs of an 8.5-year-old castrated male German Shepherd Dog evaluated because of a 6-month history of progressive depigmentation, crusting, and ulceration of the nasal planum (A), as well as gingival lesions and crusting, erosive, and ulcerative lesions on the lip margins (B). 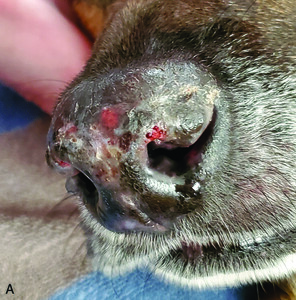 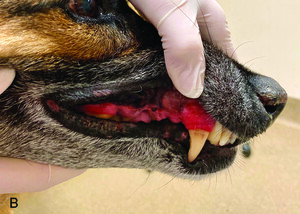 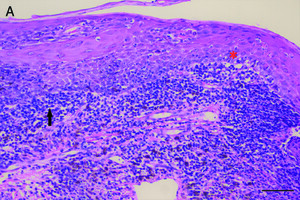 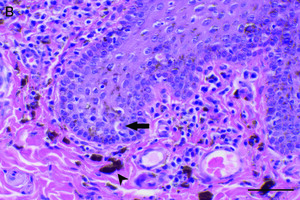 An 8.5-year-old castrated male German Shepherd Dog was presented to a veterinary specialty clinic because of a 6-month history of progressive nasal depigmentation, crusting, and ulceration. Ulceration of the prepuce had been noted 2 months prior. Within the preceding few weeks, the patient’s gums had become erythematous, and his nasal passages would become congested at night. Results of bloodwork, urinalysis, heartworm, and fecal testing performed by the referring veterinarian 11 days prior to presentation were unremarkable. The patient’s other medical history included occasional focal pyoderma in the inguinal region, which resolved quickly with antimicrobial treatment. The dog also had a history of intermittent lameness secondary to degenerative joint disease and osteoarthritis (elbow, shoulder, and lumbosacral joints). A perianal ulcer was noted in the medical records 18 months prior. The ulcer resolved with topically applied ointment (q 12 h) containing nystatin, neomycin sulfate, thiostrepton, and triamcinolone (ANIMAX, Dechra Corp), and was not noted again in the records. The nasal lesions were nonresponsive to amoxicillin–clavulanic acid (13.72 mg/kg, PO, q 12 h for 10 days) or topically applied ointment (q 12 h) containing nystatin, neomycin sulfate, thiostrepton, and triamcinolone (ANIMAX). At the time of presentation, the only medication the patient was receiving was carprofen (1.8 mg/kg, PO, q 12 h as needed) for orthopedic disease. The owners reported that the dog’s energy level, appetite, urination, and defecation were normal, and that there was no vomiting, diarrhea, coughing, or sneezing.

On physical examination, the patient was bright and alert, and had symmetric multifocal to coalescing areas of depigmentation, erythema, crusting, erosion, and ulceration on the nasal planum, bilateral mucocutaneous lip margins (Figure 1), and the mucocutaneous junction of the prepuce. Oral examination revealed generalized areas of severe gingival erythema, with multifocal pinpoint superficial erosions. There was mild gingival hyperplasia in the absence of other dental disease. Perianal mucosa was unremarkable. There was mild paw pad hyperkeratosis without ulceration or other inflammatory lesions. The general coat was clean and full.

Histopathology results from multiple punch biopsy samples of the lesions on the nasal planum and lip margin revealed an epidermis characterized by irregular epidermal hyperplasia with areas of basement membrane thickening, hydropic degeneration with clefting, and rare keratinocyte apoptosis, limited mainly to the stratum basale. All samples had a dense band-like infiltrate of mixed lymphocytes and plasma cells within the superficial dermis that obscured the dermal–epidermal junction (lichenoid interface), and numerous macrophages with brown cytoplasmic pigment within the superficial dermis (pigmentary incontinence; Figure 2). Focally, there was a split at the dermal–epidermal junction at the peripheral edge of 1 sample. Regional parakeratosis, serocellular to suppurative crusting, focal neutrophilic exocytosis, and spongiosis were also noted.

About half of the reported cases of MCLE are in German Shepherd Dogs and their crosses.2 Females appear to be predisposed, and the median age of presentation is 6 years, with a range of 3 to 13 years.1 Characteristic lesions of MCLE are well-demarcated multifocal to patchy erythematous erosions and ulcers. Lesions are reported to occur most commonly on anal or perianal skin (24/36 [67%]) or on genitalia or perigenital skin (17/36 [47%]), which can lead to dyschezia or dysuria, a common presenting complaint.1–3 Lesions may border the lips, but rarely involve the mucosa itself (10/36 dogs [28%]), and may occur around the eyes (6/36 dogs [17%]), nasal planum (4/36 dogs [11%]), or in the mouth (3/36 dogs [9%]).1 Most dogs have 2 or more regions involved at the time of presentation.1,2 Lesions tend to be symmetric in distribution, and secondary crusting sometimes develops.2 Pigmentary changes, such as depigmentation, can occur.5 Hyperpigmentation can sometimes be seen surrounding ulcerative lesions or may develop at the site of previous lesions.2

Differential diagnoses include DLE, mucocutaneous pyoderma (MCP), mucus membrane pemphigus, and erythema multiforme (EM). Lymphoma was also considered in this case because of the oral lesions, but was ruled out because of the lack of larger numbers of atypical intraepithelial neoplastic lymphocytes. In a study2 of 21 dogs with MCLE, 20% had involvement of the nasal planum, which can resemble classic DLE. However, classic DLE lesions are typically restricted to the face, without additional involvement of anal and genital juxtamucosal regions.2,4 In addition, ulcerations secondary to MCLE tend to heal without scarring, in contrast to ulcers in facial and generalized DLE.1,2 Mucocutaneous pyoderma and mucous membrane pemphigus can be very difficult to differentiate from MCLE. Mucous membrane pemphigus more commonly affects the oral cavity and mucosa,2,6 making it a clinical differential diagnosis in this case. Histopathology is key for differentiation.

Histopathology of MCLE shows lymphocyte-rich interface dermatitis with evidence of basal keratinocyte damage (apoptosis, loss, or hydropic changes). Plasma cells were mixed with lymphocytes in all cases in the largest case series. Plasma cells and lymphocytes were most numerous in epidermal, perivascular, and periadnexal regions, and in the dermis below ulcerations.2 The lymphocytic interface dermatitis may be limited to small areas and may only be seen at ulcer margins, so multiple biopsies are recommended.1–3 If lesions are obscured by infection or surface bacteria, this can be misinterpreted as MCP.2 Some histopathologic features overlap with those of EM. However, in MCLE, and not EM, interface dermatitis and basement membrane thickening are usually more prominent than suprabasal apoptosis and satellitosis, although occasional suprabasal keratinocyte apoptosis can be observed.2,7

The treatment of choice for MCLE is a combination of doxycycline (10 mg/kg, PO, q 12 h) and niacinamide (250 to 500 mg, PO, q 8 to 12 hours), with or without immunosuppressive doses of oral glucocorticoids (1 to 2 mg/kg/d).1–3,5 Glucocorticoids have been shown to shorten the time to remission by 50%. In one study,2 the median time to remission was 30 days with glucocorticoids and 60 days without glucocorticoids. In the same study,2 16 of 17 dogs (94%) had complete remission of clinical signs after treatment. Cyclosporine and topical tacrolimus have also been used successfully in multimodal treatment protocols.2,3 Relapses are common upon tapering medications.1–3 Sun avoidance and the use of sunscreen are important, as with other CLEs.4,5

Treatment with doxycycline (10 mg/kg, PO, q 12 h) and niacinamide (500 mg, PO, q 12 h) was instated. Because steroids have been shown to reduce the time to remission, and this patient was showing discomfort (congestion and oral discomfort), a steroid treatment (prednisolone, 1.5 mg/kg, PO, q 24 h) was elected. The goal was to induce remission, then slowly taper the steroids and rely on doxycycline and niacinamide for long-term maintenance. The owner was also educated on sun avoidance. Substantial improvement was noted within the first week. The patient exhibited adverse signs (excessive polyuria, polydipsia, panting) suspected to have been related to treatment with prednisolone, and it was discontinued after 7 days; however, treatment with doxycycline and niacinamide continued. Within 4 weeks after starting treatment, the lesions were nearly resolved, and resolution of all lesions except the gingival lesions had occurred by day 60 of treatment. The gingival lesions resolved by day 97 of treatment. Results of a CBC, biochemical analyses, and a urinalysis performed at day 60 were unremarkable.

In this patient, it was unclear whether the paw pad hyperkeratosis was because of an inflammatory reaction to MCLE or because of other causes, such as abnormal weight bearing from orthopedic disease. The patient’s previous history of a single perianal ulcer may have also been very early signs of MCLE. It was difficult to rule out systemic lupus erythematosus definitely as a potential cause of the intermittent lameness noted in the history in addition to MCLE lesions. An antinuclear antibody test and referral to internal medicine were considered and discussed with the owners. Because the patient was doing very well with treatment for MCLE and was not lame at the time, these were considered as potential future recommendations.