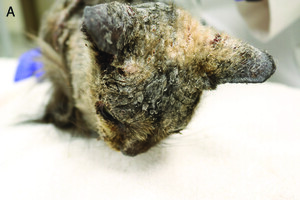 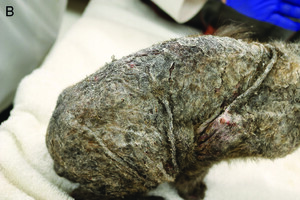 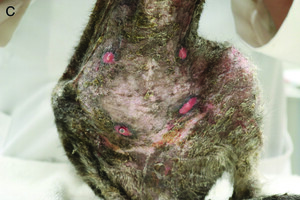 A 5-year-old 2.27-kg spayed female domestic shorthaired cat was presented to the dermatology service at a teaching hospital because of nonpruritic progressive scaling and alopecia. The alopecia developed on the head 7 months prior and was progressive. Prednisolone (0.5 mg/kg, PO, q 24 h) had been prescribed but was discontinued after approximately 10 days because of lack of improvement. In the 4 months prior to presentation, the cat was treated with cefovecin, terbinafine, cefpodoxime, and amoxicillin–clavulanate potassium with mild improvement in the malodor associated with dermatitis, but no improvement in the scale or alopecia. Adjunctive topical treatment was performed with a shampoo that contained 2% chlorhexidine, 2% acetic acid, and 1% ketoconazole (HexaChlor-K shampoo, Schuyler LLC). The cat had no travel history out of the southeastern United States.

On presentation, the cat was quiet, but alert and responsive. Rectal temperature, pulse, and respiratory rate were within reference limits. No arrhythmia or murmur was present. Dermatologic examination revealed severe, diffuse, thick, adherent plate-like scaling on the dorsum, including the head and neck (Figure 1). There was lichenification underlying the scale and complete alopecia. The proximal aspects of the limbs and ventral aspect of the thorax were also affected with severe scale, although the fragments were smaller. The ventral aspect of the abdomen was alopecic, and there were ulcerations on the nipples, and exudate and erythema on the medial aspects of the thighs. The surface of the concave pinna was ulcerated, and pinnal margins were severely lichenified with adherent scale. The thoracic limb claws were absent, and the pelvic limb claws were misshapen and brittle.

Cytologic evaluation of an impression smear of affected skin revealed numerous cocci- and rod-shaped bacteria as well as neutrophils. Trichogram and deep skin scrapings revealed no evidence of ectoparasites or dermatophytic invasion of hair shafts. Hair plucks and scale were submitted to the university microbiology laboratory, and results of the dermatophyte test medium culture was negative for growth of dermatophytes.

Punch biopsy of the skin of the dorsal aspect of the head and right shoulder joint region was performed for histopathologic evaluation and aerobic bacterial culture and susceptibility testing. The aerobic bacterial culture revealed a mixed population of bacteria, with growth of Streptococcus canis and methicillin-resistant Staphylococcus aureus (MRSA). The client was counseled on the zoonotic potential of MRSA.

Skin biopsy samples were fixed in formalin, routinely processed, stained with H&E stain, then examined (Figure 2). Within the superficial dermis were mild infiltrates of lymphocytes, plasma cells, neutrophils, mast cells, and melanin-laden macrophages. Scattered small lymphocytes extended through the epidermal and follicular basement membrane, transmigrating the epidermis and follicular walls. The epidermis was moderately hyperplastic with both ortho- and parakeratosis present. Apoptotic keratinocytes with a pyknotic or karyolytic nucleus were in all layers of the epidermis and follicular wall, with approximately 1 to 4 apoptotic keratinocytes/hpf (400X magnification; 0.237-mm2 field of view). Segments of the dermal–epidermal junction were obscured by lymphocytic infiltration, and basal keratinocytes were coarsely vacuolated. Sebaceous glands were atrophic to absent. No bacterial or fungal organisms were evident with Gram or Grocott methenamine silver stains, respectively.

Both digital radiography and CT were used for thoracic imaging. Both modalities revealed a homogenous mass within the cranial mediastinum, suspected to originate from the thymus, measuring 2.7 X 2.5 X 2.7 cm. Subjectively mild atelectasis of the left cranial lung lobe was present. Generalized cardiomegaly was also noted, with dilation of the main and lobar pulmonary arteries, interpreted as possibly associated with chronic pulmonary disease or heartworm disease. A moderate to severe, diffuse bronchial pattern was noted on radiography and confirmed on CT, and CT also revealed a solitary, soft tissue attenuating pulmonary nodule (0.7 X 0.7 X 0.6 cm) in the right accessory lung lobe. The nodule was suspected to have been a granuloma.

Median sternotomy was performed and a thymic mass was identified. The mass was adhered to pericardium but was not invading any surrounding structures. It was fixed in formalin prior to routine processing and histopathologic evaluation with H&E stain. A nonencapsulated neoplasm of spindloid cells arranged in interlacing streams and bundles was identified interspersed with groups of small lymphocytes effacing 90% of the thymus. Immunohistochemistry was performed, and neoplastic cells stained positive for cytokeratin. The T-cell origin of the lymphocytes was confirmed with positive staining for cluster of differentiation 3. Neoplastic cells had indistinct borders, moderate eosinophilic fibrillary to vacuolated cytoplasm, oval to elongated nuclei with stippled chromatin, and a single, prominent nucleolus. Anisocytosis and anisokaryosis were mild to moderate, with 6 mitotic figures in 2.37 mm2. In the fibrovascular mediastinal tissue surrounding the mass, there was granulomatous inflammation and few 100-µm-diameter, operculated trematode eggs, characterized by a thick, yellow anisotropic shell and cellular or granular internal contents.

Exfoliative dermatitis is a rare entity in cats. It is typically, although not necessarily, associated with the presence of thymoma.1 It is considered a paraneoplastic syndrome as most affected cats that undergo surgical removal of the thymoma have improvement of dermatitis without further treatment.1,2 Other paraneoplastic syndromes associated with thymoma include myasthenia gravis, hypercalcemia, T-cell lymphocytosis, and polymyositis.1,3

The pathogenesis of exfoliative dermatitis is not well understood, but is suspected to be comparable to graft-versus-host disease and erythema multiforme (EM), in which T lymphocytes, whether from exogenous or endogenous tissues, target epidermal keratinocytes.1 In thymoma-associated exfoliative dermatitis, it is suspected that the thymoma produces aberrant, autoreactive T cells that target the epithelium.1 A histologically identical form of feline exfoliative dermatitis that is not associated with the presence of thymoma has also been reported.3 In this subset of cases, no neoplastic lesions could be identified. An immune-mediated origin is suspected, because many cats responded to immunosuppression and have recurrence of disease with dosage tapering.3 In both forms of the disease, affected cats test negative for FeLV and FIV.2

Dermatologic changes often present prior to any systemic signs or clinical signs of thymoma.2,4 Lesions of abundant scale and exfoliation typically are first noted on the head and pinnae, and progress caudally. Hair loss often accompanies the scale.5 The scales may become larger throughout the course of the disease.5

Characteristic histopathologic features of exfoliative dermatitis include a cell-rich or cell-poor cluster of differentiation 3–positive lymphocytic interface dermatitis, with hydropic degeneration of basal keratinocytes. Apoptotic keratinocytes are seen in all layers of the epidermis, similar to EM. However, the apoptotic cells are typically present in fewer numbers than in EM.1 Most cases exhibit an interface mural folliculitis of the infundibulum and isthmus. Often there is orthokeratotic and parakeratotic hyperkeratosis, with desquamation and atrophic or absent sebaceous glands.1–3

Based on the susceptibility patterns of the S canis and MRSA isolated on skin culture, the cat was prescribed clindamycin (11 mg/kg, PO, q 12 h for 6 weeks). This improved the condition of the skin and resulted in a reduction in malodor and exudate prior to surgery.

Lung flukes were an unexpected finding in this patient and were suspected to have been Paragonimus kellicotti based on histologic appearance and geographic location. These parasites are found most commonly in cats in the midwestern and southeastern United States.6 Treatment with fenbendazole (52 mg/kg, PO, q 24 h for 14 days) was instituted for parasitic infestation postoperatively. The peripheral eosinophilia in this cat was suspected to have been secondary to the paragonimiasis, as this is reported in experimentally infected cats and is not a feature of exfoliative dermatitis.3,4 In severely affected cats, migrating P kellicotti flukes can cause eosinophilic pneumonia and severe bronchial disease, whereas other cats may be subclinical.6,7 Cysts can form in lung parenchyma and rupture, leading to pneumothorax and sudden death.4 Several of the changes in this cat’s thoracic imaging, such as the diffuse, severe bronchial pattern, could be attributed to the lung flukes. However, there were many other differential diagnoses, including allergic bronchitis and heartworm disease, that could cause similar lesions. Further investigations such as echocardiography and post-antiparasitic treatment follow-up radiography would be helpful to define more clearly the cause of the cardiomegaly and pulmonary changes.

Nearly 4 months postoperatively, the cat was presented to an emergency hospital with increased respiratory effort. Radiography revealed decreased abdominal serosal detail and faint pleural fissure lines, possibly secondary to chronic lung disease or scant pleural fluid. The skin had improved substantially with near-complete hair regrowth and only mild scale within the hair. Unfortunately, within 24 hours after presentation, the cat developed respiratory distress and died. Necropsy was not performed. Cause of death was hypothesized to have included neoplastic metastasis or underlying cardiac or pulmonary disease, with the latter considered most likely.