Photomicrographs of fine-needle aspirates of a retroperitoneal mass in a 12-year-old Dachshund. A—Numerous cohesive cells displaying mild anisocytosis and minimally anisokaryotic nuclei are seen in a mildly hemodiluted background. B—The cells are round to polygonal and have moderate amounts of agranular blue cytoplasm, with the occasional presence of colorless vacuoles. The nuclei are round to oval and eccentrically located and have a lacy chromatin pattern. A single, small, round prominent nucleolus is occasionally observed. Modified Wright stain; bar = 20 µm. Inset—Higher-magnification view of a single neoplastic cell. Modified Wright stain; bar = 5 µm.

Photomicrographs of a section of the right adrenal mass from the dog. A—Solid sheets and densely packed clusters of neoplastic cells are interspaced by multifocal areas of hemorrhage. H&E stain; bar = 50 µm. B—Round to polygonal neoplastic cells contain a mildly to moderately granular cytoplasm and round to oval nucleus with a coarse chromatin pattern and often contain a single prominent nucleolus. These cells displayed mild anisocytosis and anisokaryosis. H&E stain; bar = 10 µm.

Photomicrographs of sections of the right adrenal mass following immunohistochemical staining for chromogranin A (A), synaptophysin (B), neuron-specific enolase (C), and neurofilament (D). Neoplastic cells have diffuse, strong cytoplasmic positivity for chromogranin A (A), diffuse, moderate cytoplasmic positivity for synaptophysin (B), and diffuse, strong cytoplasmic and multifocal, mild nuclear positivity for neuron-specific enolase (C), but are negative for neurofilament (D). Immunohistochemical stain with 3,3′-diaminobenzidine chromogen; bar = 10 µm. 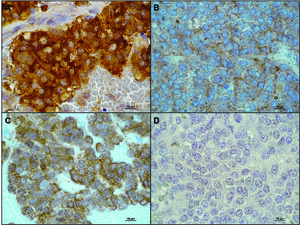 A 12-year-old 7-kg spayed female Dachshund (body condition score 4/9) was presented to the Purdue University Veterinary Teaching Hospital emergency service for evaluation of acute pain, collapse, and abdominal distention. According to the owners, the patient had begun yelping approximately 1.5 hours before presentation, and that the dog might have eaten a chicken drumstick. The patient was not vomiting and was urinating and defecating normally. The dog was not receiving routine flea, tick, or heartworm preventatives, and its vaccination history was uncertain. On physical examination, the dog was found to be in shock, with low body temperature (34.8 °C), low systolic blood pressure (100 mm Hg), pale mucous membranes, a prolonged capillary refill time (4 seconds), and an extremely tense, bloated abdomen with signs of pain on palpation.

Abdominal radiography and CT revealed a large retroperitoneal mass (6 X 5.6 X 6.4 cm), a few hypoattenuating nodules within the craniodorsal aspect of the liver, gallbladder microlithiasis, bilateral polycystic kidneys, and peritoneal effusion. The mass was multilobulated, irregularly shaped, and located on the right side in the area of the right adrenal gland. The mass compressed but did not invade the caudal vena cava and ventrolaterally displaced the right kidney. The peritoneal effusion was hemorrhagic.

Cytologically, a fine-needle aspirate of the retroperitoneal mass was highly cellular, consisting of numerous cohesive cells in a moderately hemodiluted background. The cells were distributed in various moderate to large, loosely cohesive clusters, with frequent palisading and rare acinar-like formations. When intact, the cells were round to polygonal and displayed mild anisocytosis. They had blue agranular cytoplasm and occasionally a few pinpoint colorless vacuoles. The nuclei were round to occasionally oval and eccentrically located, had a lacy chromatin pattern, and displayed minimal anisokaryosis. One small, round prominent nucleolus was occasionally observed. Numerous naked nuclei were seen within pools of blue cytoplasm. There was evidence of minimal macrophagic inflammation with rare cells containing hemosiderin or phagocytized erythrocytes. No infectious agents were identified (Figure 1).

Given the cytologic findings and location of the mass, a neuroendocrine neoplasm such as a pheochromocytoma (PCC) or neuroblastoma (NB) was considered most likely. The anemia, leukocytosis, and hyperglycemia were considered to be nonspecific findings, with the anemia believed to be a result of abdominal hemorrhage and the leukocytosis and hyperglycemia consistent with stress and pain. Considering the frequency of those 2 tumors and the age of the patient, a PCC would be more likely; considering the lack of granulation observed cytologically and the lack of specific clinical signs, an NB would be plausible. Given the poor prognosis for surgical removal, the owners elected to have the dog euthanized, and a necropsy was performed.

On gross examination, there was a poorly circumscribed, hemorrhagic, friable, light-pink to dark-red mass with multiple blood-filled cavities on cut section that extended from the right retroperitoneum into the peritoneal cavity and left retroperitoneum. The mass extended through the cortex of the right adrenal gland. The left adrenal gland, left kidney, and vena cava were surrounded but not invaded by the mass. Other organs and tissues did not have any clinically relevant gross lesions.

Histologic examination of the mass revealed densely packed neoplastic neuroendocrine cells. The neoplastic cells were arranged in clusters and solid sheets on a delicate fibrovascular stroma. Anisocytosis and anisokaryosis were mild. Neoplastic cells were round to polygonal with moderately well-defined cell borders and moderate amounts of granular, eosinophilic cytoplasm. The nuclei were round to oval and centrally to eccentrically located and had a coarse chromatin pattern with no or a single, prominent nucleolus. Mitotic figures were infrequent. Neoplastic cells were variably invading the walls of vessels (Figure 2).

Morphologic diagnosis and case summary: malignant PCC arising from the right adrenal gland and resulting in local invasion in a dog.

There are 4 neuroendocrine tumors primarily affecting the adrenal gland medulla: PCC, NB, ganglioneuroblastoma, and ganglioneuroma. These tumors arise from neuroectodermal cells of the sympathoadrenal system and have variable degrees of differentiation.1,2 PCCs are rare tumors that arise from chromaffin cells and may or may not secrete polypeptide hormones (ie, epinephrine, norepinephrine, and dopamine). The clinical presentation depends on whether the tumor is secreting hormones and, if so, which hormones it is secreting, and on the space-occupying nature of the mass itself.1 More than half of all PCCs are considered malignant, with a 30% to 50% incidence of vasculature invasion and a 20% to 30% incidence of metastasis in dogs.3 NBs are malignant tumors that arise from undifferentiated neuroblasts. When the neoplasm is composed of mature cells (ie, ganglion or Schwann cells) and prominent connective tissue, it is referred to as a ganglioneuroma; ganglioneuromas are typically benign. Ganglioneuroblastomas are tumors that share characteristics of NBs and ganglioneuromas with intermediate malignant potential. Ganglion cells, or gangliocytes, are fully mature, round cells with abundant cytoplasm and contain a large nucleus with a prominent nucleolus.2,4 In addition, parangangliomas (also called chemodectomas) are extra-adrenal tumors of sympathetic or parasympathetic origin that may share cytologic and histopathologic features with neuroendocrine tumors of the adrenal gland medulla.5,6

Cytological evaluation of fine-needle aspirates of adrenal gland masses can accurately discriminate cortical from medullary neoplasms.7 However, differentiation among the various neuroendocrine tumors and prediction of biological behavior are not possible.8 Cells from PCCs have variable sizes and usually contain fine, faintly basophilic granules in the cytoplasm,7,8 possibly correlating with secretory granules in chromaffin cells. However, agranular cells, such as the ones seen in the present case, have been previously reported in fine-needle aspirates.9 In contrast, the morphology of NB cells is not described in detail in the literature, other than their high nucleus-to-cytoplasm ratio and similarity to lymphocytes.4,7,10 Because neuroblasts do not have secretory activity, they would not be expected to have cytoplasmic granulation. In the case described in the present report, the lack of granulation and the relatively high nucleus-to-cytoplasm ratio of intact cells observed cytologically led to the 2 main differential diagnoses of PCC and NB. Both neoplasms are grossly and cytologically similar. With nonspecific clinical signs and evidence of an intraabdominal mass, it is not possible to distinguish these 2 neoplasms, although NBs will likely occur in younger animals.4

In the dog described in the present report, PCC was diagnosed on the basis of necropsy and histopathologic findings. No breed or sex predilection has been reported in dogs with PCCs. Usually, PCCs occur in older animals (mean, 10.5 years; range, 1 to 26 years), and the most common clinical signs, which are present in only 40% to 50% of cases, are nonspecific, such as weakness, tachyarrhythmias, and episodic collapse. The excess of epinephrine release may also lead to episodic manifestations of anxiety, nervous behavior, and tachypnea, along with findings suggestive of hypertension, such as retinal hemorrhage and epistaxis. These episodes are called paroxysms and can lead to clinical signs as severe as cardiovascular shock, ventricular fibrillation, cerebral hemorrhage, and seizures. Up to 25% of patients have a palpable abdominal mass at presentation.1,3,6,11 The prognosis for dogs with a PCC is guarded to poor. Adrenalectomy is the treatment of choice, but complete removal is not always possible, especially when there is vascular invasion, and morbidity and mortality rates associated with anesthesia are high.3,6,11 Medical treatment with α-adrenergic and β-adrenergic receptor antagonists may be palliative. Chemotherapy and radiation therapy protocols have not been extensively evaluated in dogs to date,3 with limited reports describing treatment with toceranib phosphate12 or radioactive metaiodobenzylguanidine.13

Laboratory evaluation of dogs with a PCC can show evidence of catecholamine release including anemia secondary to blood loss, hemoconcentration and thrombocytosis owing to splenic contraction, leukocytosis resulting from neutrophilic demargination, hypercholesterolemia attributable to increased lipolysis, hyperglycemia secondary to glycogenolysis, and proteinuria owing to hypertensive glomerulopathy. However, these findings are not consistently seen with or specific for PCCs.1,6,11 If the PCC is functional, the metabolites of epinephrine and norepinephrine (metanephrine and normetanephrine, respectively) can be detected in urine and plasma.1,5,6

In dogs with PCCs and NBs, complex, multicystic or multilobular, retroperitoneal, cranial, and dorsal abdominal masses are frequently seen ultrasonographically. CT can also be used to detect adrenal gland masses and is more sensitive than radiography; however, CT tends to underestimate tumor size.14,15

PCCs and NBs are also grossly similar, consisting of soft to friable masses with multiple areas of necrosis and hemorrhage. Frequently, a PCC is an incidental postmortem finding.16 Sites of metastasis include the regional lymph nodes, liver, spleen, kidney, lungs, and other tissues, in order of prevalence.11 Histologically, PCCs have small cuboidal to polyhedral to large pleomorphic cells, whereas NBs are composed of immature round cells with a high nucleus-to-cytoplasm ratio that contain a round dark nucleus with a small indistinct nucleolus.6,16 Immunohistochemical staining, as in this case, can be used to confirm a histopathologic diagnosis of PCC. Although both PCCs and NBs are typically positive for chromogranin A, synaptophysin, and neuron-specific enolase, positivity for neurofilament is more frequently observed only in NBs.4,15,16