Photographs of the plantar (A), medial (B), and lateral (C) aspects of the left pelvic limb paw of an 8-year-old cat that was presented for amputation of the limb following an approximate 14-month history of painful, pruritic, crusting dermatitis that progressed despite antimicrobial and immunosuppressive medications. Moderate to marked tightly adherent crusting is associated with variable alopecia, erythema, erosions, and hemorrhagic to mucopurulent discharge involving the ungual folds, digits, dorsal and plantar aspects of the interdigital webbing, and the dorsal, plantar, medial, and lateral aspects of the paw, extending to the level of the left tarsus. There is mild crusting along the peripheral margins of the paw pads. One claw is avulsed, and there is moderate to severe pachyonychia and onychogryphosis of the remaining claws.

Photomicrograph of a skin specimen. Severe, layered, serocellular crusting covers a markedly hyperplastic epidermis. A perivascular to interstitial inflammatory infiltrate is present in the superficial and middle portions of the dermis. H&E stain; bar = 1,000 µm. 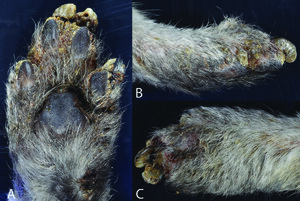 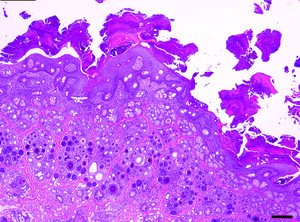 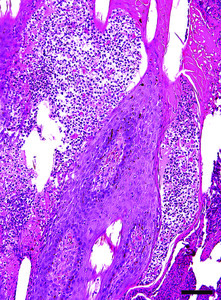 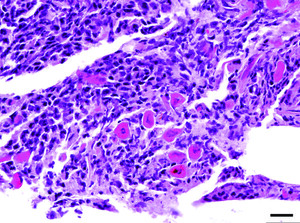 An 8-year-old spayed female indoor-outdoor domestic short hair cat was presented to the Community Surgery Service at the University of California-Davis William R. Pritchard Veterinary Medical Teaching Hospital for left pelvic limb amputation following an approximate 14-month history of progressive, painful, pruritic, crusting dermatitis involving the distal aspect of that limb. The skin lesions were reported to have originated from a single digit. After minimal improvement was noted following 2 doses of cefovecin (8.1 mg/kg, SC), the skin lesions were biopsied by the referring veterinarian approximately 11 months prior to the surgical consultation. The biopsy report described severe, chronic-active, neutrophilic, lymphoplasmacytic, and eosinophilic perivascular dermatitis with mild to moderate acanthosis, multifocal erosions, and suprabasilar clefting; the histologic findings were interpreted by the attending pathologist as originating from a secondary bacterial infection, underlying immune-mediated disease, or both. After the biopsy, limited improvements were noted following treatment with amoxicillin-clavulanate (9.9 mg/kg, PO, q 12 h) for an unknown duration and treatment with prednisolone (1.6 to 3.8 mg/kg, PO, q 24 h) for approximately 2 months. Hairs and crust were submitted for fungal culture and a PCR assay, and results for both were negative. Results of cytologic examination of surface impressions of the skin lesions were consistent with secondary bacterial infection. Samples of the skin lesions were submitted for aerobic and anaerobic bacterial culture and susceptibility testing, which yielded qualitatively equal amounts of Pseudomonas aeruginosa, methicillin-susceptible Staphylococcus aureus, and Enterococcus faecalis. On the basis of the bacterial culture and susceptibility testing results, pradofloxacin (7.6 mg/kg, PO, q 24 h) and minocycline (9.5 mg/kg, PO, q 24 h) were prescribed, after which the skin lesions improved but did not completely resolve. Repeated cytologic examination of surface impressions from the lesions revealed neutrophils that were too numerous to count and severe Malassezia dermatitis but no identifiable bacteria. Itraconazole (5 mg/kg, PO, q 24 h) was then prescribed; however, the response to treatment was unknown because the cat was not seen again at that practice. Results of a CBC and serum biochemical testing were unremarkable, and tests for feline leukemia virus and feline immunodeficiency virus were negative. Lethargy and a non–weight-bearing lameness of the left pelvic limb in the month leading up to the surgical consultation at the William R. Pritchard Veterinary Medical Teaching Hospital were reported by the owner. The owner elected to amputate the left pelvic limb because of concerns over the cat’s quality of life, the progressive nature of the skin disease, and the poor response to previous medical interventions.

On presentation, there was moderate to marked, tightly adherent crusting, variable alopecia, erythema, erosive lesions, and hemorrhagic to mucopurulent discharge present. Lesions involved the ungual folds, digits, dorsal and plantar aspects of the interdigital webbing, and the dorsal, plantar, medial, and lateral aspects of the left pelvic limb paw and metatarsal and tarsal regions (Figure 1). Mild crusting was noted along the peripheral margins of the paw pads. Crusting extended from the ungual folds to encircle the base of several claws. One claw was noted to have been avulsed, and the remaining claws were characterized by moderate to severe pachyonychia (ie, thickening of the claws) and onychogryphosis (ie, hypertrophy and abnormal curvature of the claws). Moderate to marked signs of pain were elicited on palpation of the affected skin. Cytologic examination of impression smears was performed, and results were consistent with marked secondary bacterial infection. The remainders of the general physical and dermatologic examinations were unremarkable. The left pelvic limb was subsequently amputated and submitted for histopathologic evaluation.

Large serocellular crusts spanned numerous hair follicles throughout the haired skin (Figure 2). The epidermis was characterized by moderate to marked hyperplasia, neutrophilic exocytosis, intraepidermal pustules, epidermal erosions, and variable intracellular edema and spongiosis (Figure 3). Serocellular crusts were composed of numerous partially degenerate neutrophils and aggregates of acantholytic keratinocytes (Figure 4). Individual keratinocytes randomly scattered throughout the epidermis were shrunken and hypereosinophilic with pyknotic nuclei and were interpreted as apoptotic cells. A moderate, superficial, perivascular to interstitial, dermal infiltrate composed of neutrophils, lymphocytes, plasma cells, histiocytes, and mast cells was present. The deep dermis and subcutaneous tissues were normal. Within the claw, keratin fragments were separated by large numbers of intact and degenerate neutrophils, and bacterial colonies were noted within the claw matrix. Along the phalanx were rare areas of scalloped bone with increased numbers of osteoclasts within Howship lacunae, indicative of bone resorption. The cortex of the popliteal lymph node was expanded by numerous profiles of secondary follicles, and prominent lymphoid infiltrates extended into adjacent adipose tissue. Periodic acid-Schiff staining did not reveal fungal structures in any of examined sections.

Case summary: taking into consideration the patient’s history, clinical signs, and poor response to treatment, the skin lesions were most consistent with progressive pustular and crusting dermatitis and acantholysis previously reported in 9 cats from Northern California.1

In cats, histologic features of a superficial, neutrophilic, intraepidermal pustular dermatitis with acantholysis and large, layered, serocellular crusts spanning numerous follicular ostia would historically, after dermatophytosis was eliminated, suggest pemphigus foliaceus.2–4 However, the regional and asymmetric distribution of skin lesions, progressive course of disease, and lack of response to immunosuppressive treatment in the cat described in the present report sharply contrast with the typical clinical presentation of pemphigus foliaceus. The ungual folds, digits, paw pads, and limbs are frequently involved in pemphigus foliaceus; however, skin lesions are rarely restricted to these body sites and typically are symmetric and involve > 1 extremity.4–6 Most often, pemphigus foliaceus in cats presents with bilaterally symmetrical skin lesions involving several body regions with the head, haired face, pinnae, nasal planum, and ungual folds most commonly affected.4–6 Furthermore, most cats with pemphigus foliaceus respond favorably to treatment and rapidly obtain complete remission within 1 to 2 months after initiation of immunosuppressive treatment with topical or systemic corticosteroids, cyclosporine, chlorambucil, or various combinations thereof.4–6 Although acantholysis may also be observed on occasion in conjunction with superficial pustular bacterial infections, such as bullous impetigo, it is often mild relative to what is seen in pemphigus foliaceus.3 The partial but not complete response to several courses of antimicrobials in the case presented here suggested that this cat’s pyoderma was a secondary complication and not the primary disease process.

Recently, a poorly understood, recalcitrant, progressive, acantholytic pustular, and crusting dermatitis was described in 9 cats examined in Northern California over a 14-year period.1 Clinical lesions were characterized by asymmetric, well-demarcated, markedly adherent crusting with variable alopecia and reportedly originated from a single digit, paw, or limb in 5 cats, the face or head in 3 cats (33%), and the chin and a single paw in 1 cat. Skin lesions progressed to involve the entire limb in all cats with initial involvement of a single digit or paw. Similarly, in 2 of 3 cats with initial involvement of the face or head, skin lesions progressed caudally along the cervical region and trunk. Claw abnormalities, including pachyonychia, paronychia (ie, inflammation or infection of the claw folds), onychogryphosis, or onychomadesis (ie, sloughing of the claws), were noted in 4 of the 9 cats. Crusting of the peripheral margins of the paw pads was noted in 2 cats, and lameness and osteolytic changes involving the third phalanx of an affected digit were reported in 1 cat. Histologically, skin lesions were characterized by an acantholytic pustular dermatitis with serocellular crusting, acanthosis, spongiosis, exocytosis, orthokeratotic to parakeratotic hyperkeratosis, and a neutrophilic dermal infiltrate accompanied by mast cells, plasma cells, and eosinophils. Luminal folliculitis, furunculosis, and epidermal and superficial dermal coagulative necrosis were variably noted. Histologic stains for fungi (ie, Gomori methenamine silver or periodic acid-Schiff stain) and bacteria (ie, Giemsa stain) were performed in 8 cats. Fungal structures were not identified in any of the examined sections, and when observed, bacteria were limited to the superficial crusts. Seven of 9 cats were reported to live both indoors and outdoors, and pruritus was reported in 4 of 9 cats. A causative adverse drug reaction could not be identified in any cat. No concerning abnormalities were identified in cats in which a CBC and serum biochemical testing were performed. Cytologic examination of surface impressions was performed in 6 cats, with pyoderma identified in 3 cats and Malassezia dermatitis identified in 1 cat. Skin lesions in all cats progressed despite treatment with various antimicrobials, antifungals, and immunomodulating and immunosuppressive medications, and 2 of 9 cats were euthanized because of their skin disease. One cat died and another cat was euthanized for reasons unrelated to skin disease, and 1 additional cat died unexpectedly from an unknown cause. The remaining 4 cats were lost to long-term follow-up. Similar to the cat described in the present report, 1 of the 9 cats underwent amputation of the affected limb in an attempt to halt the progression of disease. Unfortunately, this cat was lost to long-term follow-up; therefore, it is unknown whether the limb amputation provided a sustained clinical cure. No additional areas of crusting, alopecia, erosion, ulceration, or suspected skin infection developed in the cat described in the present report during the 15 months after left pelvic limb amputation.

Although the etiology and pathogenesis of this disease entity remains poorly understood, it has been speculated to represent either a genodermatosis (ie, a hereditary skin disease), a regional infectious disease, or an immunologic response following exposure to an ectoparasite endemic to Northern California.1 Evaluating sera for the presence of autoantibodies targeting desmosomal proteins and performing metagenomic analyses on fresh skin samples could offer insight into an immune-mediated process or potential infectious etiology, respectively.

The case described in the present report highlights the importance of interpreting an animal’s histologic findings in the context of its clinical presentation, history, and response to treatment. When presented with a cat with an asymmetric, progressive, poorly responsive, crusting dermatitis from Northern California with histologic features that are consistent with pemphigus foliaceus, the managing clinician and attending pathologist should be aware of and consider this elusive and, thus far, regional disease entity.