Photomicrograph of a section of the small intestine from the wallaby in Figure 1. Villi are diffusely blunted and fused, and the lamina propria is expanded and effaced by large numbers of inflammatory cells, mostly epithelioid macrophages, that also infiltrate and efface the submucosa and tunica muscularis. Multifocal to diffuse transmural hemorrhage is also present. H&E stain; bar = 1 mm.

Higher-magnification photomicrograph of a section of the small intestine. The lamina propria is effaced by sheets of epithelioid macrophages that contain numerous intracellular, round to oval, basophilic yeast. H&E stain; bar = 100 µm. 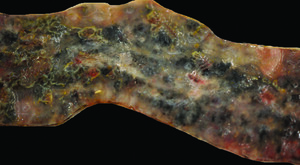 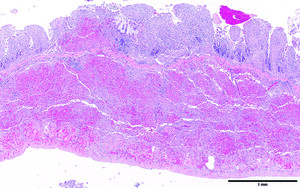 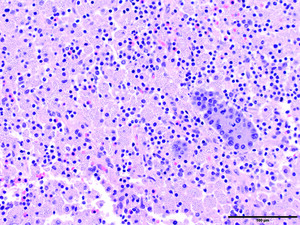 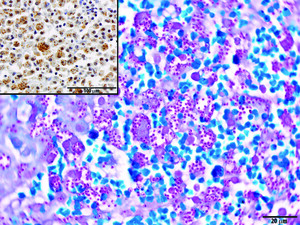 A 3.5-year-old 4.7-kg sexually intact male Tammar wallaby (Macropus eugenii) housed at a zoological facility in Columbia, South Carolina, was presented for evaluation of weight loss in the face of a noticeable increase in food intake. Initially, increasing the amount of food offered and monitoring were recommended. Over the next 10 days, however, the wallaby lost an additional 0.6 kg and was reported to be regurgitating feed.

The animal was anesthetized for a thorough physical exam, radiography, and hematologic testing. No obvious cause for the weight loss and regurgitation was identified, and the wallaby was provided supportive care. The animal showed no clinical improvement the following day, and CT was performed because of concerns about possible intestinal obstruction. CT revealed generalized megaesophagus and gastric dilatation without evidence of gastric mispositioning, thin body condition, signs of recent SC injections, and incidental rostral falx cerebri mineralization. There was no evidence of gastrointestinal tract obstruction. Results of serologic testing for wallaby retrovirus and Toxoplasma gondii were positive; results of fecal PCR assays for Entamoeba spp and Cryptosporidium spp were negative. Supportive care with fluids, antacids, analgesics, antibiotics, and supplemental feeding was continued; however, the wallaby was found dead in its enclosure 24 days after initial presentation.

At necropsy, the wallaby was in poor body condition with notable muscle atrophy over the entire body. There was diffuse subcutaneous edema over the head and in the submandibular area. All teeth were firmly rooted with no evidence of periodontal disease. The thyroid gland was pale but subjectively normal in size. The abdominal cavity contained approximately 5 mL of clear yellow effusion. The serosal surfaces of the small and large intestines appeared mottled. When opened, the caudal half of the small intestine and approximately 12 inches of the proximal portion of the colon had multifocal ulcerations with fibrinous material covering the more severely affected regions of the intestine. This material could be easily peeled from the mucosa (Figure 1). There were multiple pale, enlarged mesenteric lymph nodes that appeared normal on the cut surface. A single 0.5-cm-diameter firm, pale pancreatic nodule was present. No other internal abnormalities were found.

Samples from all major organ systems were fixed in neutral-buffered 10% formalin for histologic examination. Fresh tissue samples, including multiple sections of intestine, were collected and submitted for bacterial culture, fungal culture, and virologic and parasitological assessment.

Formalin-fixed sections of the brain, eyes, heart, lymph nodes, trachea, esophagus, lung, stomach, small and large intestines, pancreas, spleen, kidney, adrenal glands, testicles, bone marrow, skeletal muscle, and haired skin were routinely processed and stained with H&E stain. On histologic examination, the most prominent changes were in the intestinal tract. In the small intestine, villi were diffusely blunted and fused, and the lamina propria was expanded by large numbers of epithelioid macrophages that infiltrated into and greatly expanded the submucosa and effaced the tunica muscularis (Figures 2 and 3). Within these macrophages and rarely extracellularly, there were a variable number of round to oval, approximately 2-µm yeast-like organisms with a basophilic nucleus surrounded by a peripheral clear zone and enclosed by a thin cell wall. These organisms had a positive periodic acid-Schiff reaction and stained with Grocott methenamine silver stain. The organism was also immunopositive for Histoplasma capsulatum on the basis of immunohistochemical staining with rabbit anti–H capsulatum antibody (1:10,000; Gibson Bioscience; Figure 4). In sections of the large intestine, > 90% of the colonic mucosa was replaced with epithelioid macrophages and fewer multinucleated giant cells along with hemorrhage and macrophages infiltrating into the submucosa and tunica muscularis. These macrophages contained variable numbers of yeast-like organisms similar to those seen in the small intestine. The mucosal surface of the large intestine was multifocally ulcerated and covered with clusters of mixed gram-negative rods and gram-positive cocci. Similar inflammation effaced the lymph nodes.

Paraffin-embedded sections of intestine (3- to 10-µm unstained rolls) were submitted for a fungal PCR assay (targeting the internal transcribed spacer and D1/D2 regions) and Sanger sequencing, and samples were positive for H capsulatum. An archived serum sample was submitted to a commercial laboratory for serologic testing for Histoplasma spp, and results were positive.

Emaciation in this wallaby was associated with severe intestinal histoplasmosis tentatively confirmed by means of immunohistochemical testing. The agent was subsequently identified as H capsulatum with a PCR assay and sequencing performed on a formalin-fixed, paraffin-embedded section of intestine.

Histoplasma capsulatum has historically been shown to infect a variety of mammals, including marsupials such as the common opossum (Didelphis marsupialis) and the Virginia opossum (Didelphis virginiana).1,2 There are limited reports of infection in wallabies, but details of those infections are lacking.3 Histoplasma capsulatum is a dimorphic ascomycete that grows in its hyphal, mold form in soil and bird and bat feces.4,5 It grows as a yeast once exposed to environments with temperatures > 37 °C.6,7 Infection is typically initiated by inhalation of aerosolized microconidia and mold fragments that convert into the virulent yeast form in the infected host.3 Yeast cells then proliferate within phagocytes, mostly dendritic cells and macrophages. Typically, cell-mediated immunity is capable of inhibiting this proliferation, but, in immunosuppressed hosts, macrophages will disseminate the yeast via the lymph and blood throughout the mononuclear phagocytic system and initiate granuloma formation.7,8

Histoplasmosis is not contagious and has 3 main manifestations: asymptomatic disease, respiratory disease, and disseminated disease.4,6,7 The most common manifestation is asymptomatic disease. Respiratory infection can self-resolve or progress into severe respiratory disease. Disseminated histoplasmosis will typically affect the spleen, liver, bone marrow, and lymph nodes. A substantial percentage (10% to 50%) of human patients with disseminated histoplasmosis will develop gastrointestinal signs that include diarrhea (typically large intestinal), intestinal blood loss, hypoalbuminemia, anemia, and weight loss.5,7–9 Gastrointestinal involvement may be seen in 75% of dogs with disseminated disease.10 Primary gastrointestinal histoplasmosis, as seen in this wallaby, also occurs, and although inhalation is considered the primary route of infection, ingestion has been suggested to be a possible secondary route and would account for primary gastrointestinal disease.4

Histoplasma capsulatum is endemic to North America and most commonly found along the Mississippi, Ohio, and St. Lawrence river valleys.3,6,9 At the time of death, this wallaby was housed at a zoological facility in South Carolina, a location where histoplasmosis is relatively uncommon, but the animal had been acquired about a year earlier from a zoological facility in Illinois, an area of the country where histoplasmosis is more commonly seen.11 Because the incubation period can range from 2 to 3 weeks to several years, it is possible that this wallaby acquired infection at the original location in Illinois.4 This possibility was supported by the negative serologic test results for Histoplasma spp for the remainder of the macropod collection at the South Carolina location. Histoplasma capsulatum is also globally distributed, with endemic areas in 9 Chinese provinces along the Yangtze River Valley, India along the Ganges and Brahmaputra rivers, Southeast Asia (Thailand and Myanmar), Australia along the Dumaresq and Macintyre rivers, and Italy along the Po River Valley. In sub-Saharan Africa, there is a geographically restricted variety known as Histoplasma capsulatum var.9

Yeast morphology is key in differentiating mycotic agents such as H capsulatum, Cryptococcus neoformans, Blastomyces dermatitidis, and Coccidioides immitis, which can all cause similar clinical signs. As seen in this case, H capsulatum is uniquely identified within macrophages as 2- to 4-µm-diameter, round, basophilic structures surrounded by a clear halo,7,8 whereas C neoformans yeast cells range from 4 to 6 µm in diameter, form a large polysaccharide capsule that can reach up to 30 µm in thickness, and have narrow-based budding,12 and B dermatitidis yeast cells are 8 to 15 µm in diameter with a single, broad-based bud and thick, double-refractile walls.4 Histoplasma capsulatum infection can be confirmed through cytologic examination of a variety of samples, including lymph node and splenic and skin nodule aspirates, rectal scrapings, airway washes, cavity effusions, buffy coat aspirates smears, bone marrow aspirates, and impression smears. Serologic testing for anti–H capsulatum antibodies is considered unreliable owing to high numbers of false-negative and false-positive results.5 On the other hand, a PCR assay and sequencing are reliable and very sensitive for fungal identification of both isolates and tissue samples.13

The treatment of choice for histoplasmosis is itraconazole (10 mg/kg, PO, q 24 h) for a minimum of 4 to 6 months and at least 1 to 2 months after resolution of clinical signs. Ketoconazole (10 to 15 mg/kg, PO, q 12 h) for 4 to 6 months can be effective in early or mild cases. In severe cases, addition of amphotericin B (10 mg/kg, PO, q 24 h) is recommended. Corticosteroid administration is contraindicated owing to suppression of immune function. Antibiotic administration is indicated because of the potential for secondary infections.4,5,14