Postmortem images of a 10-year-old Buff Orpington hen that was euthanized because of chronic lameness and weight loss. A—A 3.5 X 7 X 2.5-cm mass is present in the subcutis of the neck cranial to the crop. The mass is encased by a thin capsule with prominent vasculature. B—On cut section, the mass was soft and beige to pale pink with a few multifocal to coalescing areas containing firm, dry, pale-yellow amorphous material. The mass consisted of multiple, variably sized, fluid-filled cysts containing clear-yellow, watery fluid. Bar = 1 cm.

Photomicrographs of the cervical mass. A—The neoplasm is encapsulated and well demarcated and consists of neoplastic epithelioreticular cells arranged in solid sheets and dense trabeculae separated by a fine fibrovascular stroma. H&E stain; bar = 100 µm. B—On a higher-magnification image, the neoplastic cells can be seen to have a round to ovoid nucleus, finely stippled chromatin, a single prominent nucleolus, and granular pale eosinophilic cytoplasm. Throughout the neoplasm are scattered structures resembling Hassall corpuscles (arrowhead) and moderate numbers of lymphocytes. H&E stain; bar = 100 µm. 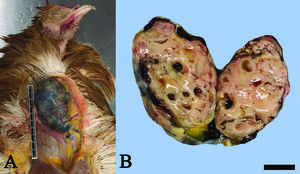 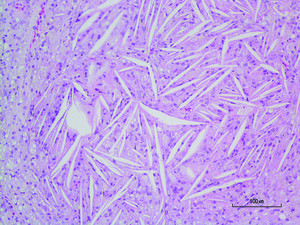 A 10-year-old Buff Orpington hen was presented to the Indiana Animal Disease Diagnostic Laboratory with a history of chronic lameness and weight loss. The hen was submitted live with the intention that a diagnostic workup be performed following euthanasia.

On physical examination, the hen was lethargic and unwilling to ambulate; body condition was considered poor on the basis of marked atrophy of the breast muscles and prominent keel bone. Palpation of the right cervical area cranial to the thoracic inlet revealed a soft, nonmovable, nonpainful, ovoid mass.

The hen was euthanized, and on gross examination, a 3.5 X 7 X 2.5-cm mass was identified in the subcutis of the neck cranial to the crop (Figure 1). The surface of the mass was soft and mottled yellow to gray-black with prominent vasculature encased in a thin capsule. On cut section, the mass was soft and beige to pale pink with a few multifocal to coalescing areas of firm, dry, pale-yellow amorphous material. The mass contained multiple variably sized, fluid-filled cysts with clear-yellow, watery content. Multiple lobes of the thymus were identified cranial to the mass.

Thymoma with focal xanthomatosis in a backyard hen.

The cervical mass identified in this backyard hen was diagnosed as a thymoma, a tumor arising from thymic epithelial cells.1–10 This determination was based on the gross location of the mass and histopathologic characteristics of neoplastic epithelioreticular cells, sheets of small lymphocytes, and multifocal aggregates of cells forming Hassall corpuscle–like structures.

In chickens, the thymus is a multilobular organ organized as a chain of 7 lobules of ovoid tissue located subcutaneously on either side of the neck, adjacent to the jugular vein.2,4,5,7,9–11 In avian species, the thymus is a primary lymphoid organ functioning as a site of T-lymphocyte maturation.4,5,10,11 Histologically, the thymic lobes are surrounded by a connective tissue capsule, and lobules are separated by fibrovascular stroma.5,10 Each lobule consists of a cortex composed of epithelioreticular cells, lymphocytes, and macrophages bordering a medulla composed of epithelial cells, lymphocytes, myoid cells, and aggregates of epithelial cells (Hassall corpuscles).3–5,10,11 The organ reaches maximum size at around 3 to 4 months of age and then begins to regress around the age of sexual maturity.4,5,10

Thymomas are slow-growing tumors that are uncommon in mammalian species but have been observed in cattle, goats, sheep, dogs, cats, and horses.1,2,7,10 In avian species, thymomas are rare, but there have been documented cases in chickens with select cases in a scarlet macaw, a mynah bird, an American robin, a finch, a budgerigar, a Java sparrow, a burrowing owl, and a duck.2–11 Grossly, thymomas are typically limited to a single lobe and are located mediastinally in mammalian species and cervically in avian species.1–10 Across species, this neoplasm is described as an encapsulated, beige to white mass with variable foci of necrosis and hemorrhage that is frequently cystic on cut surface.1–9

Thymic neoplasms are histologically separated into thymic lymphomas and epithelial tumors, with epithelial tumors further organized on the basis of a classification system from the World Health Organization for human medicine based on histologic features.1 This classification of thymic epithelial tumors is mainly applicable to mammalian, particularly canine, thymic tumors and has not been verified in avian species.1 Epithelial thymic tumors, as described in this case, include morphologic features such as encapsulated sheets of epithelial cells with indistinct cell borders, Hassall corpuscles, and scattered, variable numbers of small lymphocytes.1–10 The diagnosis in previously reported avian cases was made on the basis of anatomic location, histologic features, and, in some cases, results of immunohistochemical staining.2–10 Cytokeratin immunohistochemical staining has been used successfully to verify tumors of epithelial origin in Java sparrows, American robins, and chickens.1,3,4,6

Complications and clinical signs associated with thymomas are not observed in most avian species.2,3,6,8 When present, clinical sigs are typically associated with the size and location of the mass and can include dysphagia, weight loss, lethargy, and dyspnea.4,5,8,9 Most thymic neoplasms are slow growing, infrequently metastasize, and rarely recur following surgical removal.1,3–9 In a scarlet macaw, metastasis to the lungs was histologically demonstrated.5

In addition to the thymoma in the chicken described here, the cholesterol clefts in conjunction with granulomatous inflammation in the subcutaneous tissues abutting the thymic mass were characteristic of a subcutaneous xanthoma, a nonneoplastic mass.10–13 This lesion develops secondary to deposition of cholesterol followed by infiltration of macrophages that phagocytose the material.10–13 These masses are frequently documented in pet birds, particularly cockatiels and budgerigars, with lesions commonly involving the wing tips, keel, abdomen, and cloacal region.11–13 Xanthomas grossly appear as yellow, irregular, nodular to solitary masses in association with nonfeathered skin and may show signs of self-mutilation.12,13 The pathogenesis is not well defined but potential predisposing factors include a diet high in fat or cholesterol, genetics, obesity, hyperlipidemia, hypothyroidism, and trauma.10,12,13