Photograph of the ventral aspect of the neck of an 8-year-old spayed female Labrador Retriever showing irregularly shaped, coalescing, erythematous plaques and papules that suddenly developed along with ventral edema and multiple erythematous papules, plaques, and patches on the ventral aspects of the thorax, axillae, extremities, and caudal abdomen 12 hours after initiation of referral hospitalization and treatment for vomiting, weakness, and hemorrhagic diarrhea. 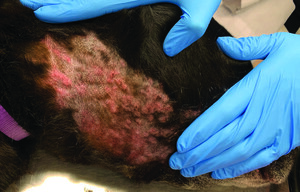 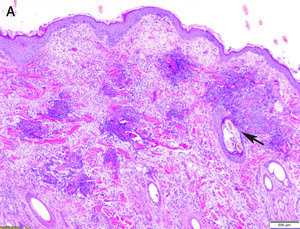 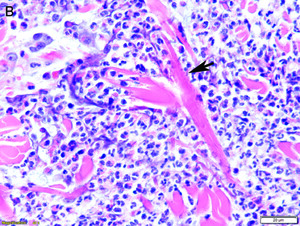 An 8-year-old 26-kg spayed female Labrador Retriever was referred because of weakness, vomiting, and hemorrhagic diarrhea. Four days earlier, the dog had been evaluated by the referring veterinarian because of a 3-day history of weakness and vomiting. The referring veterinarian hospitalized the dog and provided treatment with metoclopramide, maropitant, ceftiofur, dexamethasone sodium phosphate, and 6 boluses of normal saline (0.9% NaCl) solution. During hospitalization, vomiting and weakness persisted, and the dog developed hemorrhagic diarrhea, which prompted the referral. There was another dog in the household, and that dog was not affected.

The history and clinical, cytologic, and histopathologic examination findings are most consistent with a diagnosis of CAEDE, also known as Wells-like syndrome.1–3 This uncommon syndrome is clinically characterized by erythematous macules, papules, or plaques with edema, often most evident on the ventrum,3–5 as observed in the dog of the present report. Arciform, serpiginous, coalescing, and targetoid lesions may also occur.2–5 In a retrospective analysis,3 22 of 29 (76%) dogs with CAEDE showed gastrointestinal (GI) signs prior to, or concurrent with, skin lesion development.3 The dog of the present report also demonstrated vomiting and hemorrhagic diarrhea before skin lesions appeared.

Canine acute eosinophilic dermatitis with edema is often compared with eosinophilic cellulitis (Wells syndrome) in humans. In previous reports,2–5 differences between the conditions are evident. For example, large indurated plaques, peripheral eosinophilia, pruritus, prolonged waxing and waning courses, and association with neoplasia may be seen in humans with Wells syndrome but are not typically in dogs with CAEDE.3,5–8 Therefore, this may be a unique cutaneous reaction in dogs.3,5 In the present report, none of the aforementioned features of Wells syndrome were appreciated.

Although the pathogenesis of the disorder has not been completely elucidated, reported phenomena associated with CAEDE include arthropod bites, adverse food reactions, adverse drug reactions, and allergic dermatitis.4 Idiopathic cases have also been reported.4 Drugs that have been implicated in triggering this disease include metronidazole, paroxetine, and diethylcarbamazine.3,5,9 The present dog had exposure to metoclopramide, maropitant, ceftiofur, dexamethasone sodium phosphate, normal saline solution, trazodone, probiotic paste, and fluid and electrolyte solution prior to skin lesion development. To our knowledge, none of these above have been documented to be triggering factors.

There are limited case reports to confirm signalment predilection of CAEDE. A female preponderance of 2:1 has been reported.10 In 2 case series, 4 of 94 and 7 of 293 affected animals3 were Labrador Retrievers. However, in a more recent report, Labrador Retrievers were not significantly overrepresented.10 Most affected dogs have been adults (range, 7 months to 12 years).3,5,10 The present case was an 8-year-old spayed female Labrador Retriever.

The dog of the present report had CBC results consistent with a stress or mild inflammatory leukogram, characterized by a mild mature neutrophilia, lymphopenia, and monocytosis. Serum biochemical panel revealed evidence of malabsorption based on the panhypoproteinemia and hypocholesterolemia, with some protein loss suspected to have resulted from a combination of malabsorption and hemorrhagic diarrhea. Total hypocalcemia with hypomagnesemia were likely secondary to decreased protein binding, the former of which was verified with identification of low free calcium (commonly referred to as ionized calcium) concentration measurement. Interestingly, hyperchloremic metabolic acidosis (corrected chloride concentration, approx 119 mmol/L) was also present and in this dog and could have been attributed to diarrhea or boluses of physiologic saline. The concurrent alkalinizing effect of hypoalbuminemia likely explained why the bicarbonate concentration was within reference limit. Decreased intake or loss through the gastrointestinal tract was the most likely mechanism for the dog’s hypokalemia. As extracellular shifting of potassium is an expected change secondary to metabolic acidosis, the dog’s total body potassium stores may have been lower than suggested by results the serum biochemical analysis. These abnormalities paralleled those previously described in dogs with CAEDE,2–5 specifically hypoalbuminemia, hypocholesterolemia, and overall mild leukogram changes, and are largely attributed to malabsorption.

To the authors’ knowledge, there has only been 1 report4 that documents lymph node FNA cytologic findings for a dog with CAEDE. The aspirate demonstrated reactive eosinophilic lymphadenitis.4 For the dog of the present report, cytologic examination of FNA samples from lymph nodes revealed a mild increase in eosinophils and free melanin and hemosiderin pigment, which suggested an underlying dermatopathy.

Histopathologic findings associated with CAEDE include dermal eosinophilia with associated edema, flame figures, epidermal hyperplasia, spongiosis, dilated blood vessels, and perivascular mast cell infiltration.3–5,11 However, the severity of these changes appears to be highly variable. A grading scheme encompassing 3 distinct levels of severity has been reported,5 and findings for the dog in the present report fit in the most severe level, which has been characterized as severe diffuse inflammation and edema throughout the dermis with frequent collagen flame figures, epidermal edema, vesicles, or ulcers.

Clinical differential diagnoses for the acute onset of edema and erythematous papules, plaques, and patches include sterile neutrophilic dermatosis; erythema multiforme and vasculitis can be included if targetoid lesions are present.1 These differential diagnoses can typically be eliminated based upon histologic appearance. Although sterile neutrophilic dermatosis can histologically resemble subtle cases of CAEDE, the lack of eosinophils in this condition is a distinguishing feature.1,5,10 Canine acute eosinophilic dermatitis with edema may be distinguished from erythema multiforme by the lack of apoptotic keratinocytes and lymphocytic satellitosis and from vasculitis by the lack of signs consistent with vascular damage, such as fibrinoid vascular necrosis, leukocyte infiltration of the vascular walls, or signs consistent with ischemic change.2–5,12

Because some instances of CAEDE appear to be drug induced, all medications administered prior to skin lesion development should be withdrawn if possible. Mild cases may resolve spontaneously. Severe cases may benefit from immunomodulation with prednisone (1 to 2 mg/kg, PO, q 24 h; or 0.5 to 1 mg/kg, PO, q 12 h) or other systemic corticosteroids (eg, dexamethasone or methylprednisolone),2–5 topical corticosteroids (eg, betamethasone or triamcinolone),3 or systemic antihistamines (eg, hydroxyzine, cetirizine, diphenhydramine, or chlorpheniramine).3–5 Dogs with GI signs may be treated with gastroprotectants, antimicrobials, or anthelmintics (alone or in combination) as needed.3,5 Most dogs with CAEDE responded to treatments and showed full resolution.2–5 In previous reports, skin lesions typically resolved in 1 to 4 weeks,2–5 whereas GI signs resolved in 1 to 13 days (mean, 4.6 days).5 Skin lesion relapse occurs infrequently, with 0% to 22% of affected animals developing recurrence or waxing and waning of skin lesions.2–5 Generally, the prognosis appears favorable.

The dog of the present report was treated primarily for GI signs with the aforementioned medications. Dosages were adjusted based on responses. After skin lesions developed, treatment with pentoxifylline was added because of concerns of vasculitis. Steroids were withheld because of screening for hypoadrenocorticism as a differential diagnosis for the GI signs. Initial results for baseline cortisol were below reference limits, necessitating an ACTH stimulation test. By the time this result and the skin histopathology report were available, the skin lesions were markedly improved. Steroids were thus considered unnecessary and not administered. The dog was discharged 2 days after skin lesions developed (10 days after GI signs developed) with resolved GI signs. In telephone follow-up conversations, the owner reported that skin lesions fully resolved within 1 week after hospital discharge and that there had been no relapse of skin lesions or GI signs within 6 months after hospital discharge.