Clinical images of the left eye of a 6-month-old sexually intact female Pembroke Welsh Corgi evaluated because of a prolapsed gland of the left third eyelid (TE) of 2 to 3 days’ duration on initial examination before biopsy (A) and 2 weeks later (B). A—There is a nodular, expansile third eyelid mass. B—Marked growth of the TE mass has occurred. The globe is obscured, and the mass has black, necrotic areas with hemorrhage.

Photomicrograph of a tissue section from a TE punch biopsy sample obtained from the dog described in Figure 1 showing that the overlying epithelium is ulcerated and that the TE is expanded by a densely cellular, nodular, infiltrative, and unencapsulated neoplasm. H&E stain; bar = 500 µm. 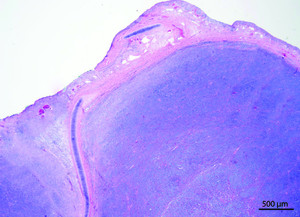 A 6-month-old sexually intact female Pembroke Welsh Corgi was presented to the emergency service for evaluation of an abnormal prolapsed gland of the left third eyelid (TE) that had been growing over the previous 2 days.

Initial clinical findings revealed a nodular, proliferative mass protruding from the posterior aspect of the TE that compressed the nasal side of the globe and caused enophthalmos (Figure 1). The remainder of the ophthalmic and physical examinations were normal. Ocular ultrasonography revealed a heterogeneous mass within the rostromedial orbit compressing the globe. A 2-mm punch biopsy was done. Two weeks later, the mass had grown and obscured the globe. Results of a CBC and serum biochemical analyses were within reference limits. Thoracic and abdominal imaging and additional systemic diagnostic procedures, such as a bone marrow aspirate or lymph node aspirate, were declined.

The excised TE was expanded by an unencapsulated, infiltrative, nodular, and densely cellular neoplasm composed of pleomorphic round cells (Figure 2). The cells were organized in sheets separated by thin fibrovascular stroma. Neoplastic cells had dense nuclei with hyperchromatic to clumped chromatin, 1 to 3 nucleoli, and scant basophilic to eosinophilic cytoplasm. Anisocytosis and anisokaryosis were mild with 40 mitotic figures in 10-hpf (400X, 2.3 mm2) fields. Neoplastic nuclei were approximately 1 to 1.5 times the size (6 to 10.5 µm) of an erythrocyte. Neoplastic cells extended within 0.5 mm of the margin. Immunohistochemical staining of sections of the TE for CD20 (B-cell marker) and CD3 (T-cell marker) revealed approximately 85% to 90% immunoreactivity for CD20 and rare, randomly distributive immunoreactivity for CD3 (Figure 3).

Systemic lymphoma is the most prevalent neoplasia in dogs affecting an estimated 13 to 24 dogs in 100,0001,2 and approximately 1.5 dogs in 100,000 less than 1 year old.3 Disseminated lymphoma presents with ocular signs in 0.33% to 3.2% of cases.4,5 Ocular findings associated with systemic lymphoma include anterior uveitis, posterior uveitis, panuveitis, retinal hemorrhages, and adnexal disease.6 Systemic staging, such as thoracic and abdominal imaging, lymph node aspirates, bloodwork, and potentially bone marrow aspirates, is recommended when periocular or intraocular lymphoma is confirmed. Presumed solitary ocular lymphoma is a category of lymphomas that occur intraocularly and periocularly. They have been reported with wide median survival times of 178 days7 to 769 days8 for intraocular variants and up to 1,216 days for periocular variants.8

Cases of primary periocular lymphoma in dogs, cats, and horses are limited to a few reports involving the eyelid, cornea, conjunctiva, or TE. The most common tumors of the canine TE include adenocarcinoma, papilloma, and malignant melanoma with TE lymphoma listed as uncommon.9 Conjunctival and TE lymphomas seem to have a better prognosis compared to diffuse eyelid and disseminated lymphomas—up to 1,216 days versus 168 days, respectively.7,10–13 Surgical excision of primary conjunctival lymphoma without adjunctive therapy has achieved remission in several reports.11–13,14 Previously reported conjunctival lymphomas in dogs include mucosa-associated marginal B-cell lymphoma of the TE,11 a B-cell bulbar lymphoma,12 and T-cell lymphoma of the palpebra.13 Equine conjunctival lymphomas have also been reported but have a similarly poor survival rate to nonconjunctival presentations.15 Systemic staging in all cases of the ocular form of lymphoma is recommended given the mortality rate associated with conjunctival manifestations of systemic lymphoma.13,15 A review of 21 cases of intraocular and periocular lymphomas specifically reported TE lymphoma in 1 dog and 3 cats. The dog had diffuse lymphadenopathy, whereas the 3 cats did not. Two of the cats were presumed primary T-cell TE lymphoma, and the remaining cat had B-cell lymphoma. Survival times were not reported.16 In horses, diffuse eyelid lymphoma was associated with a poor prognosis, whereas nodular conjunctival and TE forms had a favorable prognosis. With surgical resection, no recurrence was reported in 10 horses with cases of nodular lymphoma with 1 to 7 years of follow-up and an age range of 3 to 22 years.15 Finally, 3 dogs presenting for corneoconjunctival lymphoma had systemic involvement and were classified with stage 5 disease.10

Regarding the histopathologic and immunohistochemical findings of the current report, the TE tumor is a small cell, low-grade B-cell lymphoma17 due to the nuclear size being 1 to 1.5 times the size of an erythrocyte, having 4 mitotic figures/hpf, and having 85% to 90% immunoreactivity with CD20 (B-cell marker). Typically, low-grade systemic B-cell lymphoma carries a median survival time of 168 days and occurs in middle-aged dogs.17

The tumor described in the current report appears to mimic, in location, appearance, and postsurgical behavior, a nodular, conjunctival lymphoma described in horses15 rather than a systemic lymphoma. The average ages of all dogs with conjunctival lymphoma with no report of recurrence from previous studies range from 1 to 8 years (mean, 4.3 years) making this report’s 6-month-old dog the youngest reported.7,10–13 Because additional staging diagnostics were not performed, systemic involvement cannot be confirmed in this case; however, the patient remains asymptomatic over 1 year after surgery supporting a primary process. Also, a nodular phenotype in this location has not been reported. Therefore, due to patient age, tumor location and type, and prolonged survival, the current case is either a unique subtype of B-cell lymphoma or a subtype of nodular or conjunctival lymphoma not yet reported. The survival time most closely mimics nodular and conjunctival lymphomas, which are associated with a longer survival time in some reports.7,10–13 This patient was subsequently diagnosed with TE nodular, low-grade, small cell B-cell lymphoma.

Despite lymphoma typically affecting older pets, the diagnosis should still be considered in young animals with atypical presentations. Given the low-grade subtype in this report, the rapid growth was unexpected. Therefore, if an incisional biopsy confirms TE lymphoma, it may be advisable to excise the tissue as soon as possible. The patient continues to do well after TE resection over 1 year later. The globe remains mildly ventronasally enophthalmic but retains vision and comfort.