Photomicrograph of an antemortem blood smear (A) from a 10-year-old female gyrfalcon (Falco rusticolus) evaluated because of a sudden onset of presumed biliverdinuria and depression and a necropsy image of the bird (B), which was found dead 2 days later. A—There is low erythrocyte density, consistent with severe anemia, and there are only rare heterophils and thrombocytes. Wright stain; bar = 15 µm. Inset—A leukocyte (arrow) had a high nuclear-to-cytoplasmic ratio, round to oval nucleus, ill-defined nucleoli, and a few basophilic (primary) and eosinophilic (secondary) cytoplasmic granules, consistent with myeloblasts or progranulocytes. Wright stain; bar = 15 µm. B—The liver is markedly enlarged and has multifocal to coalescing tan foci.

Postmortem photomicrographs of sections of the bone marrow from the gyrfalcon described in Figure 1. A—There are sheets of neoplastic round cells effacing and replacing the bone marrow. H&E stain; bar = 300 µm. B—Neoplastic cells show well-defined cytoplasmic borders; an eosinophilic cytoplasm filled with finely granular, intensely eosinophilic granules; and an eccentric nucleus with vesicular chromatin and 1 or 2 small nucleoli. Scattered cells are smaller and have indented or bilobed nuclei with dense heterochromatin (metamyelocytes and heterophilic differentiation). H&E stain; bar = 50 µm. 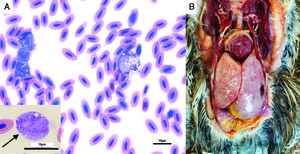 An approximately 10-year-old 1.3-kg female gyrfalcon (Falco rusticolus) from a zoological institution was evaluated because of a sudden onset of presumed biliverdinuria and lethargy. Two weeks prior, routine physical examination performed under manual restraint was unremarkable.

The gyrfalcon was anesthetized for complete physical examination and diagnostic workup. Radiography and ultrasonography revealed severe hepatomegaly with loss of radiographic contrast within the coelom and compressed air sacs. Assessment of plasma biochemistry was made in comparison to reference values published in a study with 102 healthy gyrfalcons.1,2 Aspartate transaminase (AST) activity was markedly high (1,013 U/L; reference range, 22 to 172 U/L), and alanine transferase (ALT) activity was mildly high (203 U/L; reference range, 15 to 184 U/L). Alkaline phosphatase (ALP) activity was mildly low (59 U/L; reference range, 139 to 993 U/L). Glutamate dehydrogenase (GLDH) activity was mildly high (19 U/L), compared with the reference value of < 8 U/L reported in the peregrine falcon (Falco peregrinus), a closely related species.3 Other results, including those for bile acids and protein electrophoresis, were within reference limits. Pancytopenia was noted on hematology, with 6% of atypical undifferentiated hematopoietic precursor cells characterized by cytoplasmic granules that were basophilic (primary), eosinophilic (secondary), or both and vacuolation in the cytoplasm (Figure 1). The hemogram was characterized by moderate regenerative anemia with a RBC count of 1.0 X 1012 RBCs/L (reference range, 3.1 X 1012 to 5.12 X 1012 RBCs/L) with 3% to 6% polychromatophils. There was marked thrombocytopenia (estimated at < 10 X 109 platelets/L; reference range, 12 X 109 to 29 X 109 platelets/L) and marked leukopenia (estimated at < 1 × 109 WBCs/L; reference range, 4.2 X 109 to 10.8 X 109 WBCs/L).4 The RBC count was obtained using a Coulter counter analyzer, and the thrombocyte and leukocyte counts were estimated on a blood smear.

On postmortem evaluation, the gyrfalcon was thin, with decreased muscle mass, serous atrophy of fat, and green-yellow discoloration of the tongue. The liver was severely enlarged (11.7% of body weight; reference range,5 2.0% to 3.5%), occupying three-quarters of the coelomic space and compressing the air sacs (Figure 1). The liver was pale tan with multifocal to coalescing white areas effacing 75% of the parenchyma and 1- to 10-mm-diameter foci of hemorrhage affecting approximately 20% of the parenchyma. Similar lesions were also observed in the spleen and kidneys. Fifty percent of the bone marrow of both tibiotarsi was replaced by pale-tan, caseous parenchymatous infiltrate.

Tissue samples were fixed in neutral-buffered 10% formalin and routinely processed and stained with H&E stain for histologic examination. A population of large neoplastic round cells arranged in wide sheets replaced and effaced up to 95% of the bone marrow cavity (Figure 2). Neoplastic cells were up to 20 µm in diameter and had well-defined cytoplasmic borders, moderate amounts of eosinophilic cytoplasm, which often contained intensely eosinophilic granules (myeloid differentiation); an eccentric nucleus with vesicular chromatin; and 1 to 2 small nucleoli. Approximately 10% to 30% of the granulated neoplastic cells were smaller and showed indented or bilobed nuclei with dense heterochromatin (metamyelocytes and heterophilic differentiation). Anisocytosis and anisokaryosis were mild to moderate, and there were up to 5 mitotic figures/hpf (400X). Single-cell necrosis was seen throughout the neoplasm.

Acute myeloid leukemia is a type of myeloid neoplasia characterized by the proliferation of poorly differentiated myeloid precursors, either in the bone marrow or in extramedullary hematopoietic tissue such as the spleen or liver.6,7 Animals with AML have typically been ill only days to weeks, and clinical signs are nonspecific.6,7 Laboratory findings consist of profound cytopenia affecting 1 or more cell lines, and sometimes organomegaly.6,7 In humans and animals, a diagnosis of AML is made when, in addition to severe cytopenia, there are more than 20% of cells within the bone marrow or peripheral blood that are undifferentiated hematopoietic precursor cells (blasts).6 Chronic leukemia on the other hand, is the proliferation of differentiated, relatively mature hematopoietic cells, and typically manifests with leukocytosis and gradual onset of clinical illness.5 Details on further classification of myeloid-type leukemia are found elsewhere.5,6

Acute myeloid leukemia is an uncommon diagnosis in birds of prey. To our knowledge, only a single case report8 of a great horned owl (Bubo virginianus) with chronic myelogenous leukemia has been described. In domestic poultry, myeloid neoplasia is associated with avian leukosis virus (ALV) infection.9,10 Experimental inoculation with ALV in layer chickens resulted in hemangiosarcoma in 50% and myeloid neoplasia in 10% of specific pathogen free chicks.9,10 To date, a retroviral etiology for myeloid tumors in bird of prey has not been reported. This case report describes AML in a single bird of prey. Although the clinicopathologic results fit the diagnosis of AML, further characterization was not performed due to a lack of validated immunohistochemical techniques and cytochemical stains in gyrfalcons. In the current case, no histologic lesions were suggestive of a viral infection, although further investigation would be warranted to completely exclude a viral etiology.

The clinical presentation of this gyrfalcon was consistent with AML in other species. Infiltration of various organs by myeloid neoplastic cells typically results in a nonspecific clinical presentation with clinicopathologic findings reflecting the organs affected.3 Initial clinical signs were nonspecific: lethargy, inappetence, and green droppings (presumed biliverdinuria due to hepatic compromise). Diagnostic imaging and clinical pathological data initially suggested infectious or toxic hepatopathy (severe hepatomegaly, markedly high AST activity, mildly to moderately high ALT, ALP, and GLDH activities). Diagnosis of hepatocellular dysfunction is difficult in avian species due to a lack of specific liver enzymes.11 Historically, AST activity has been proven to be an unreliable indicator for liver damage in birds.11 On the other hand, GLDH activity has high specificity but low sensitivity for hepatocellular damage. Bile acids, although commonly used to assess liver function in birds, may be normal or low if there is severe hepatocellular dysfunction.11 Hematologic changes aid in differentiating AML from hepatic disease. In this gyrfalcon, white blood cell differential count revealed pancytopenia with numerous atypical cells in circulation, which was consistent with AML. On necropsy, histopathology revealed the presence of a neoplastic population of myeloid precursors displaying heterophilic differentiation, effacing the bone marrow, and infiltrating multiple organs. Absence of reactivity for diaminobenzidine histochemical staining is consistent with previous reports indicating that avian heterophils lack peroxidase activity, unlike eosinophils (the other differential diagnosis for cells of this morphology).12

In this case, the diagnosis of AML was reached postmortem and histopathology was a critical diagnostic tool. The acute and nonspecific clinical presentation of this gyrfalcon posed substantial challenges for antemortem diagnosis. The rapid clinical deterioration did not allow for sufficient time to perform a bone marrow or endoscopic liver biopsy prior to this gyrfalcon’s death. Although uncommon, AML should be part of the differential diagnosis in birds with unexplained pancytopenia and nonspecific signs of organ dysfunction. Cytologic or histologic evaluation of bone marrow and liver should be performed promptly to allow for antemortem diagnosis. Prognosis for such myeloproliferative disorders in birds is poor, and to our knowledge, there have not been reports of treatment options for affected birds.