Photograph of the cut surface of a mass in a formalin-fixed segment of jejunum from a 13-year-old 21.3-kg spayed female Australian Shepherd with sudden onset of signs of severe abdominal pain, vomiting, fever, lethargy, and progressive hyporexia of 24-hour’ duration. There is regionally extensive infiltration, disruption, and effacement of the normal intestinal mucosa and wall by a white to tan mass (arrow).

Photomicrographs of a section of jejunum from in the dog described in Figure 1. A—Affecting approximately 60% of the jejunal circumference, the mucosa and wall are transmurally effaced by an infiltrative, poorly defined neoplasm (asterisk), which extends into the mesentery. H&E stain; bar = 4 mm. B—Sheets of pleomorphic round cells display marked anisocytosis and anisokaryosis, bizarre mitotic figures (arrowheads), and multiple nucleoli (arrows). H&E stain; bar= 20 µm. 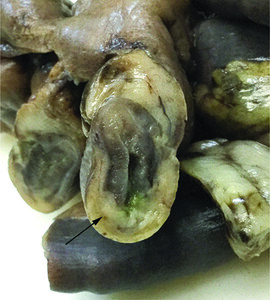 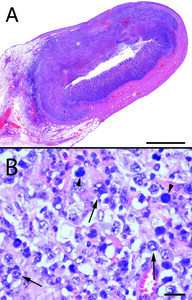 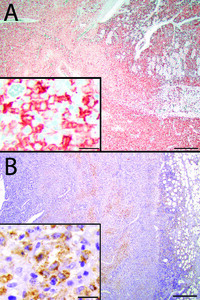 Search for other papers by Sophie A. Aschenbroich in
Current site
Google Scholar
PubMedClose
DVM, PhDaschenbroich@wisc.edu

A 13-year-old 21.3-kg spayed female Australian Shepherd was referred to the University of Wisconsin-Madison Veterinary Care Emergency and Critical Care Service because of a sudden onset of signs of severe abdominal pain, vomiting, fever, lethargy, and progressive hyporexia of 24 hours’ duration. The dog had been treated for diarrhea with metronidazole (prescribed by the referring veterinarian) a week prior to presentation, and was fed a diet (i/d, Hill’s Pet Nutrition Inc) to manage historical chronic colitis. A CBC performed by the referring veterinarian on the day of the referral examination revealed a moderate neutrophilia (19,500 neutrophils/µL; reference range, 2,950 to 11,640 neutrophils/µL).

On presentation, the patient was febrile with a rectal temperature of 39.8 °C (reference range, 38.2 to 39.2 °C). Oral mucous membranes were hyperemic and tacky, and femoral pulses were bounding. Following bolus administration of an electrolyte solution (Plasma-Lyte A, Baxter; 20 mL/kg, IV), an abdominal-focused assessment with sonography for trauma was performed and revealed free fluid within the abdominal cavity. Cytologic evaluation of the fluid demonstrated rods and cocci. A subsequent complete abdominal ultrasonographic examination revealed a segment of jejunum with a thickened wall, loss of layering, and small, multifocal, intramural hyperechoic tracts extending toward the serosa. The surrounding mesentery was hyperechoic. Adjacent intestinal segments were mildly distended and corrugated, with slightly thickened walls but without loss of layering. There was free gas and a moderate amount of free fluid within the peritoneum. Based on these findings, a perforated jejunal mass was suspected, and surgical exploration was recommended.

Exploratory laparotomy revealed a moderate amount of serosanguinous, cloudy peritoneal effusion and 2 jejunal masses, 1 of which was perforated. Fine-needle aspirate samples were obtained of the larger, perforated mass, and cytologic examination revealed primarily band and segmented neutrophils, with fewer macrophages and lymphocytes, rare plasma cells, and rare bacterial rods. In a few areas, there were large lymphocytes that were up to 2 times the width of a neutrophil, with high nucleus-to-cytoplasm ratios, round, oval, or indented nuclei, smooth chromatin, 0 to 4 prominent nucleoli, moderately basophilic cytoplasm with occasional tiny vacuoles or paranuclear clear zone, and occasional binucleation.

Jejunal resection and anastomosis were performed to remove both jejunal masses, which were later submitted for histopathology. The resected jejunal segment was received fixed in neutral-buffered 10% formalin. The 2 masses (an approx 2.5-cm-diameter spheroid mass orad and an approx 1.0-cm-diameter spheroid mass aborad) were well-demarcated, infiltrative, light tan, and approximately 33.5 cm apart. Each mass segmentally thickened the jejunal wall and extended slightly into the adjacent mesojejunum. The orad mass was focally disrupted by a transmural 1-mm perforation. On cut surface, these masses were white-tan and markedly effaced the intestinal mucosa and wall (Figure 1).

Sections of the jejunal masses and mesentery were processed routinely, and histopathologic evaluation of both masses revealed a densely cellular, pleomorphic, round cell neoplasm that infiltrated and expanded the jejunal lamina propria, effaced intestinal glands, and extended transmurally into the adjacent mesenteric adipose tissue (Figure 2). Neoplastic round cells had variably distinct cell borders, with moderate to abundant eosinophilic homogenous cytoplasm, and round to oval, vesicular nuclei with up to 5 variably distinct eosinophilic nucleoli. The neoplastic cells in the orad mass were markedly more pleomorphic than those in the aborad mass, with frequent bizarre nuclei, bizarre mitotic figures, and multinucleated cells with up to 4 nuclei. Anisocytosis and anisokaryosis were marked, with 43 mitoses in 10 hpfs (400X). Although there was no clear evidence of vascular invasion, clusters of neoplastic cells frequently surrounded and abutted blood vessels. There were numerous, extensive areas of intratumoral coagulative necrosis in the orad mass. In multiple, locally extensive areas, the serosa was infiltrated by high numbers of degenerate or viable neutrophils as well as expanded and replaced by well-vascularized granulation tissue (peritonitis). The adjacent mesentery was multifocally replaced by inflamed, well-vascularized granulation tissue and fibroplasia.

In dogs, histiocytic sarcoma (HS) is a malignant neoplasm of interstitial dendritic cell or macrophage origin.1–3 Although this neoplasm has the potential to arise from various tissues in which dendritic cells reside, the most common sites of primary HS are the spleen, lymph nodes, lungs, bone marrow, CNS, skin, subcutis, and periarticular and articular tissues of the limbs.1 An HS that has not spread beyond local lymph nodes is termed localized histiocytic sarcoma, whereas an HS that has dispersed more widely is described as disseminated histiocytic sarcoma.1,2,4 Secondary sites to which dissemination frequently occurs include liver, lungs, and hilar lymph nodes.1 The dog breeds most commonly affected by HS include Bernese Mountain Dogs, Rottweilers, Flat-Coated Retrievers, Golden Retrievers, Pembroke Welsh Corgis, and Shetland Sheepdogs.1–6 Dogs with HS generally have a single or multiple destructive white to tan masses1 with variable necrosis.2 Histologically, most HSs are comprised of sheets of large, pleomorphic, round cells with multinucleated giant cells often exhibiting marked cytologic atypia, vacuolation, and numerous bizarre mitotic figures.1,2,5 Other HS lesions may consist of spindle cells, either alone or mixed with round and multinucleated giant cells.1,2 Given their variable morphology and pleomorphism, HSs can be difficult to differentiate histologically from other round cell neoplasms, as well as from anaplastic large cell carcinomas, or various other sarcomas; therefore, confirmation of histiocytic lineage often necessitates immunophenotyping.1,2

In the dog of the present report, based on the clinical history, presence of 2 discrete jejunal masses, gross appearance of the masses, and cytologic and histopathologic findings, intestinal lymphoma was initially suspected; however, the presence of substantial pleomorphism and multinucleation was considered unusual. Ultimately, immunohistochemical staining was required for a definitive diagnosis.

Historically, immunophenotyping of HS has been achieved through the use of lineage-associated histiocytic markers, such as Mac387, MHC II, lysozyme, CD45, and CD18.3,4,6,7 More recently, ionized calcium binding adapter molecule 1 (Iba-1) and CD204 have emerged as more specific markers in the diagnosis of HS.4,6,7 Iba-1 is recognized as a pan-macrophage marker and is expressed strongly and almost exclusively by histiocytic cells, including the monocyte or macrophage lineage and dendritic cells.7 Although CD204 is a class A macrophage scavenger receptor and historically considered to be macrophage-specific, it has been shown in multiple studies3,4,6,8 to be expressed by localized and disseminated HSs presumed to arise from dendritic cells. The specificity of CD204 for histiocytes has been demonstrated by lack of immunoreactivity for multiple sarcomas and round cell tumors,4 with only 1 grade 3 mast cell tumor found to display positive labeling.6 In the present case, a diagnosis of HS was made on the basis of positive immunoreactivity of neoplastic cells to Iba-1 and CD204 and absence of immunoreactivity for CD3 and CD79a.

Findings for the dog of the present report were unusual inasmuch as the HS appeared to have been localized to the intestinal tract at the time of surgery. To our knowledge, there are only 3 other reports of canine gastrointestinal HS, 2 of which were localized and confined to the stomach,9,10 and 1 which was localized to the jejunum,11 similar to the present case. Symptoms associated with localized HS are generally related to the specific organ affected,1 such as vomiting, diarrhea, and signs of abdominal pain in dogs with gastric HS.9,10 The single case report11 of a jejunal HS in a dog describes focal tumor perforation with signs referable to peritonitis at the time of presentation (similar to the dog of the present report), and the authors of that report opined that even small lesions of HS in the intestine may be prone to perforation.

Although the dog of the present report recovered uneventfully from surgery which led to the diagnosis of jejunal HS, the dog was presented 7 weeks later to its primary veterinarian due to recurring anorexia, lethargy, fever, and depression. Based on poor prognosis, euthanasia was elected, and a necropsy performed by the referring veterinarian revealed masses throughout the duodenum, jejunum, and ileum and in the mesenteric lymph nodes. One of the jejunal masses was perforated, resulting in recurrence of the septic abdomen. Histopathologic results for the additional masses and a lymph node were consistent with localized intestinal HS. Although rare overall, 4 documented cases suggest that localized gastrointestinal HS in dogs is underrecognized in veterinary medicine and should be considered as a differential diagnosis for gastrointestinal round cell neoplasia in dogs.