Photomicrograph of a direct smear from a fine-needle aspirate sample of the left inguinal lymph node of the dog described in Figure 1. Numerous large epithelial cells with indistinct cell borders are present in a large cluster. The cells display minimal atypia, with moderate amounts of light blue cytoplasm, and oval nuclei that have coarsely stippled chromatin and 1 or 2 small, round nucleoli. Wright-Giemsa stain; bar = 100 µm.

Photomicrograph of a tissue section from the clitoral mass from the dog described in Figure 1. The polygonal neoplastic cells are arranged in solid sheets, packets, and occasional tubules supported by a fine fibrovascular stroma. The cells display moderate anisocytosis and anisokaryosis and contain a moderate amount of eosinophilic, slightly granular cytoplasm and large, round to ovoid nuclei with coarsely stippled chromatin and 1 or 2 prominent nucleoli. H&E stain; bar = 50 µm. 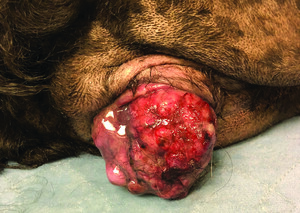 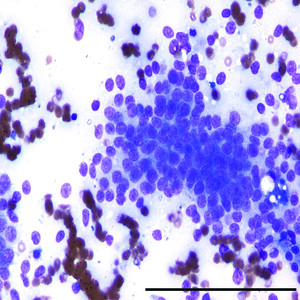 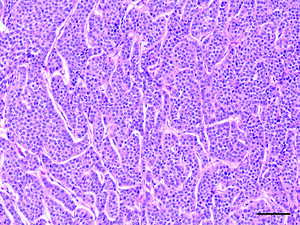 A 10-year-old 33-kg female spayed mixed-breed dog was referred to The Ohio State University Veterinary Medical Center oncology service for evaluation of a clitoral mass. The dog was originally presented to the referring veterinarian approximately 4 months prior for unknown reasons, at which point the referring veterinarian identified a small urogenital mass in the dog’s vestibule and performed a fine-needle aspirate (FNA) for cytologic evaluation by an ancillary diagnostic laboratory (results consistent with a carcinoma). No other clinical signs were reported, and the dog was clinically normal until 24 hours prior to presentation, at which point the owners reported the mass had prolapsed.

On physical examination, a lobulated, ulcerated soft tissue mass (approx 7.0 X 6.5 X 4.5 cm) protruded from the vulva (Figure 1). No other abnormalities were noted.

A CBC, serum biochemical profile, and urinalysis were performed. Minor abnormalities consistent with a stress leukogram were present on the CBC. The total serum calcium concentration was moderately high (15.2 mg/dL; reference interval [RI], 9.3 to 11.6 mg/dL), the ionized calcium concentration was moderately high (6.3 mg/dL; RI, 4.9 to 5.7 mg/dL), and the phosphorus concentration was mildly low (3.1 mg/dL; RI, 3.2 to 8.1 mg/dL). Other abnormalities on the serum biochemical profile included mildly high activities of aspartate transaminase (119 U/L; RI, 12 to 40 U/L) and creatine kinase (1,165 U/L; RI, 50 to 400 U/L), attributable to muscle damage (eg, from compression by the mass), mildly high corticosteroid-induced alkaline phosphatase (84 U/L; RI, 0 to 6 U/L) attributable to corticosteroid effects (eg, chronic illness), and mildly high globulins (3.2 g/dL; RI, 2.2 to 2.9 g/dL) attributable to individual variation. The urine was isosthenuric with a specific gravity of 1.010, possibly due to hypercalcemia; results for BUN and serum creatinine concentrations were within reference limits. No other abnormalities were present.

Findings on CT revealed that the mass arose from the clitoris or vagina and had intimate association with the caudal aspect of the urethra; no outright invasion into nearby tissues was noted. The left and right inguinal lymph nodes were enlarged, with the right node approximately 2.3 X 2.3 X 5.6 cm, and the left not measured. The right medial iliac lymph node was enlarged (approx 3.0 X 3.6 X 6.0 cm). Aspirate samples of the left inguinal lymph node were submitted for cytologic evaluation. Surgery was not feasible due to the tumor’s proximity to the urethra, and the owners elected euthanasia because of the poor prognosis. Necropsy was performed and found lesions similar to those detected on CT. Tissues were submitted for histologic evaluation.

Direct smears from the FNA sample of the left inguinal lymph node were highly cellular. Numerous large epithelial cells with indistinct cell borders were seen individually and in large clusters. The cells displayed minimal atypia, with moderate amounts of light blue cytoplasm and oval nuclei that had coarsely stippled chromatin with 1 or 2 small, round nucleoli (Figure 2). When intact, the cells displayed mild to moderate anisocytosis and anisokaryosis. There was a minor lymphoid component that consisted of a heterogeneous population of lymphocytes, most of which were small, with rare intermediate and large lymphocytes. Rare well-differentiated plasma cells were present.

Case summary: clitoral adenocarcinoma with hypercalcemia and lymph node metastasis in a dog.

Clitoral adenocarcinoma is a rare neoplasm in dogs: only 9 other cases have been reported in literature, and the cytologic and histologic findings have been only recently described.1–4 Additionally, and of note because the clitoris is homologous to the penis, at least 1 case of penile adenocarcinoma with concurrent hypercalcemia has been reported.5 All of the primary clitoral tumors reported have been adenocarcinomas.1–3 This tumor arises from the apocrine glands located at the base of the clitoris and clitoral fossa.4 Much like apocrine gland anal sac adenocarcinoma, which clitoral adenocarcinoma resembles cytologically and histologically, clitoral adenocarcinoma readily metastasizes to local lymph nodes, is often accompanied by hypercalcemia, and may have a similar prognosis; however, this has not been studied in depth.2,4,6 All of these features were seen in this case. Although the serum concentration of parathyroid hormone-related protein was not above RI in this patient and to our knowledge has been reported as high in only 1 previous case, measurement of parathyroid hormone-related protein may be a useful ancillary diagnostic tool.4

It was unknown why the dog of the present report was initially evaluated by the referring veterinarian. After initial detection of the urogenital mass by the referring veterinarian, the dog was reported to have been clinically normal until it was presented to The Ohio State University oncology service because the mass had prolapsed 24 hours prior. Clinical signs of clitoral adenocarcinoma can include the presence of a mass, frequent licking of the vulva, hemorrhagic vulvar discharge, and polyuria and polydipsia (likely secondary to hypercalcemia of malignancy).1–4 Polyuria and polydipsia were not reported for the dog of the present report. In all previously reported cases and in this case, no anal sac masses were present, a finding that could help exclude the possibility of an apocrine gland anal sac adenocarcinoma that has extended into the vulvar region.1–4 Cytology is helpful in the diagnosis of clitoral adenocarcinoma, but histologic confirmation is required for a definitive diagnosis. Immunohistochemistry markers that may assist in diagnosis include pancytokeratin, neuron-specific enolase, chromogranin A, and synaptophysin. None of these stains were performed in this case. In previously reported cases of clitoral adenocarcinoma, the primary mass was diagnosed on cytology as a malignant epithelial neoplasm, underscoring the diagnostic utility of cytology of urogenital masses to acquire an early provisional diagnosis.1–4