Intraoperative (A) and gross examination (B) images of a mesenteric mass removed from near the duodenum of an 8-month-old male Labrador Retriever with a 3-day history of vomiting and anorexia. A—The mass is adhered to the duodenum by a stalk (arrow) but does not invade the duodenal wall or lumen. B—The mass has been incised, revealing a central cavity surrounded by a firm wall, and the adjacent pale brown, soft, lumpy material (asterisk) was contained in the cystic structure. Bar = 3 cm.

Intraoperative (A) and gross examination (B) images of a mesenteric mass removed from near the duodenum of an 8-month-old male Labrador Retriever with a 3-day history of vomiting and anorexia. A—The mass is adhered to the duodenum by a stalk (arrow) but does not invade the duodenal wall or lumen. B—The mass has been incised, revealing a central cavity surrounded by a firm wall, and the adjacent pale brown, soft, lumpy material (asterisk) was contained in the cystic structure. Bar = 3 cm. 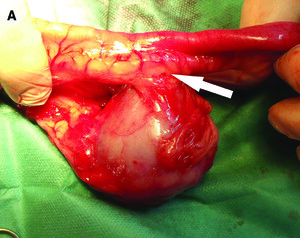 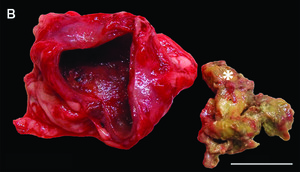 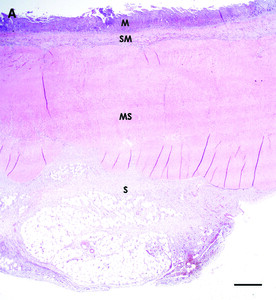 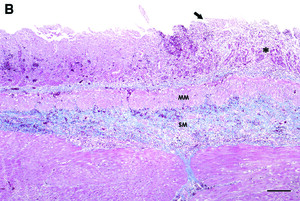 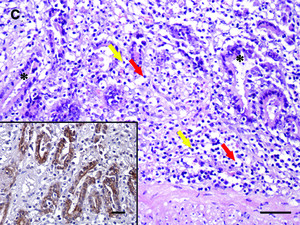 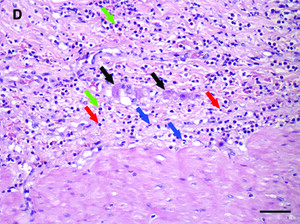 An 8-month-old male Labrador Retriever was examined because of a 3-day history of recurrent vomiting, anorexia, and weight loss. The animal’s diet was based on a commercial product formulated for dogs admixed with table scraps. The dog was initially treated with metoclopramide (unknown dosage) but had persistent clinical signs and was presented for examination.

On clinical examination, the dog was slightly lethargic and had a mildly low body condition score (3/9). Vital signs and results for a CBC and serum biochemical analyses were within reference limits. No signs of pain were elicited on abdominal palpation; however, a movable, firm mass in the mid-cranial aspect of the abdomen was identified. Abdominal radiography revealed a round mass protruding cranially from the middle region of the abdomen. There were neither signs of obstruction nor dilation of the small intestine. Ultrasonography of the area located the mass close to the duodenum and revealed that the mass had a layered wall surrounding a central hypoechoic cavity.

Exploratory ventral midline laparotomy was performed. A round, mesenteric mass (approx 6 cm in diameter) was attached to the serosa of the duodenum by a fine fibrous stalk. The mass was located slightly caudal to the right lobe of the pancreas, approximately between the descending duodenum and the caudal duodenal flexure. There was no involvement of the intestinal wall nor luminal or extraluminal obstruction. The mass alone was resected (ie, without resecting a portion of duodenum; Figure 1) and then refrigerated for 24 hours before being submitted for evaluation.

The excised mass was examined, and grossly, it was an approximately 5 X 6 X 5 cm, spherical, unilocular, cystic structure. When incised, it had an 0.8-cm-thick wall that enclosed a large central cavity containing abundant necrotic, caseous, and mucoid material (Figure 1). The cystic structure was fixed in neutral-buffered 10% formalin and then processed routinely for histopathologic and immunohistochemical evaluation.

Histologically, the cystic structure had a multilayered wall resembling that of the small intestine, with an inner mucosal layer (partially compromised by autolysis), villi-like projections toward the lumen, and an occasionally distinct lining of columnar epithelium that formed crypts (Figure 2). Concentrically surrounding this layer, there was a thin smooth muscle layer of muscularis mucosa, a moderately expanded submucosa, a prominent smooth muscle layer that was thick and partially double layered, and serosa that was expanded by fibrosis. The serosal layer fibrosis multifocally spread outwards, enclosing some adjacent groups of mesenteric adipocytes, and inwards, enclosing some muscular fascicles of the adjacent muscular layer. The area adhered to the duodenum consisted of a stalk of fibroadipose tissue continuous with the serosa of the cyst. There were small multifocal aggregates of angular neurons with hypochromatic nuclei in the submucosa and between the inner and outer muscular layers, consistent with submucosal and myenteric nervous plexuses. There were multifocally scattered lymphocytes, plasma cells, eosinophils, and neutrophils, mainly in the mucosa and submucosa. Immunohistochemical evaluation was performed with the use of an anti-pancytokeratin antibody (1:500; AE1/AE3, Dako Corp) to identify and evaluate mucosal epithelium because autolysis related to delayed fixation impacted its preservation. Immunohistochemically labeled epithelial cells were identified in the crypt-like structures of the mucosal layer.

The dog of the present report was a young, large-breed dog with gastrointestinal signs of relatively sudden-onset of signs, including intermittent vomiting, suggestive of intestinal obstruction. Thus, obstruction by a foreign object was the initial top differential diagnosis. Additional differential diagnoses included intussusception, acute gastritis, incarcerated or strangulated intestinal hernia, and intoxication.1 An abdominal mass detected on physical examination and further characterized with diagnostic imaging was revealed to have been a cystic structure at laparotomy. The dog recovered well following removal of the cystic structure and was discharged the following day with a prescription of amoxicillin–clavulanic acid. During recheck examination 1 week after surgery, the owners did not report any of the previous abnormal clinical signs.

The cystic structure removed from the dog of the present report was classified as a cyst of enteric origin because it had a multilayered wall with a mucosal epithelial lining almost identical to that of the small intestine. Differentiation between the 2 subtypes of cysts of enteric origin depends on the presumed process of formation during embryogenesis, which may be estimated by the characteristics of the wall.2 The origin of an enteric cyst is the migration of an acquired diverticulum (pseudodiverticulum) into the mesentery, and the wall consists of an internal lining of enteric mucosa without muscular layers and nervous plexuses.3,4 An enteric duplication cyst, on the other hand, corresponds to a segment of embryonal double intestinal lumen in which one of the lumens and its corresponding wall is isolated from the rest of the intestines during prenatal development.5–7 A fetal true gut diverticulum, strangulated and individualized during gestation, is also considered a likely origin of an enteric duplication cyst.8 In both described scenarios for the development of an enteric duplication cyst, the wall contains mucosa, submucosa, and muscularis layers with nervous plexuses; however, if the origin were a tubular duplication, the cyst would share an outer muscular layer with the muscularis of the apposed normal intestinal segment,5 which was not observed in the cyst from the dog of the present report. Therefore, this cyst was classified as an enteric duplication cyst, and its origin was most likely a prenatal true diverticulum that underwent stenosis, given it had its own muscular layers. The described clinical signs appeared later after birth, presumably due to the original small size of the cyst, which could have increased gradually because of continuous sloughing of an active mucosa toward the lumen. Progressively, the increasing size of the cyst could have exerted pressure on adjacent structures (ie, pylorus) leading to vomiting, anorexia, and other gastrointestinal signs.6 The surgical excision removed this pressure and thus the associated clinical signs stopped.

In human medicine, cysts of enteric origin are reported mainly in infants.7,9 In contrast, there are fewer cases described in the veterinary literature, and include reports of affected horses,10 chickens,11 research rodents,12,13 cats,14,15 and dogs.5,6,16–18 Interestingly, a report describes a duodenal duplication cyst that underwent malignant transformation in a domestic shorthair cat.15 In dogs, these cysts may vary in location and histologic characteristics but, in general, are described in young, large-breed dogs.17,18 The cysts may be clinical or subclinical, and if signs appear, they consist of nonspecific gastrointestinal signs such as intermittent vomiting or weight loss. The histologic characteristics of most cysts of enteric origin include an intimal association between the cyst wall and the adjacent alimentary tract segment, with a shared muscularis layer as the most common scenario.5 To our knowledge, there are only 2 previous reports of a fully individualized cyst similar to that identified in the dog of the present reported case.6,18 One of those dogs had a cyst near the pylorus and showed similar signs to those observed in the dog of the present report.18 In both cases,6,18 surgical excision was curative, as it was for the Labrador Retriever puppy of this report. Surgical excision of the cyst is the treatment of choice to avoid further complications such as obstruction, infection, perforation, or malignant transformation.

In veterinary medicine, the information about these kinds of malformations available in the literature is scarce. Thus, it is important to publish comprehensive clinicopathologic descriptions of any new case, and the present report adds information to the current body of knowledge regarding enteric duplication cysts in dogs. Furthermore, the present case highlights the importance of considering these malformations in the differential diagnosis of obstructive-like gastrointestinal signs in young, large-breed dogs.