Photograph of the opened scrotum of a 10-year-old Holland lop rabbit with acute inappetence, lethargy, decreased fecal output, and dull mentation. The animal subsequently had a seizure-like episode and died. Notice the scrotum is markedly expanded by 2 coalescing, well-demarcated, distinct masses. One of masses is black, soft, and adhered to the scrotal skin (asterisk) and contains multifocal areas of tan and friable material. The second mass is tan, soft, and lobular and has replaced the normal testicular parenchyma (dagger). Bar = 1.0 cm.

Photomicrographs of a section of the black-pigmented mass arising from scrotal skin in Figure 1. The unencapsulated and poorly demarcated neoplasm has infiltrated the dermis underlying the scrotal skin and is composed of markedly pleomorphic, polygonal to spindle-shaped cells that contain variable amounts of black and granular pigment. H&E stain; bar = 100 µm. Inset—In addition to variable amounts of black pigment granules, the neoplastic cells had a 25-fold variation in cell size with frequent mitoses and prominent nucleoli. H&E stain; bar = 10 µm.

Photomicrograph of a section of 1 of the rabbit’s kidneys. Necrotizing and heterophilic vasculitis multifocally obliterates vessels within the renal medulla and abundant heterophils, fibrin, and coccobacilli efface the renal vessels. H&E stain; bar = 50 µm. Inset—In another kidney section, there are gram-positive coccobacilli. Gram stain; bar = 10 µm. 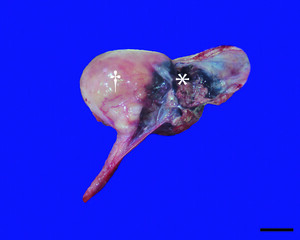 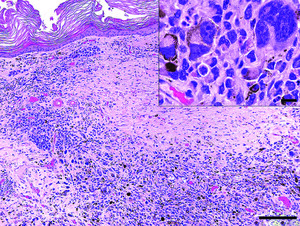 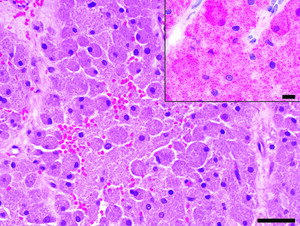 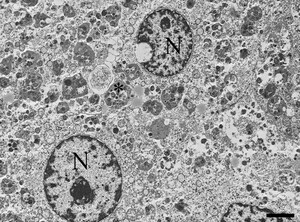 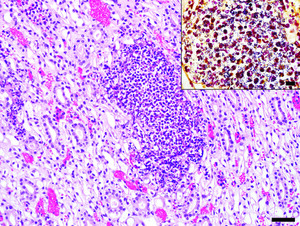 A 10-year-old 1.91-kg sexually intact male Holland lop rabbit was presented to an emergency service for evaluation of lethargy, inappetence, and decreased fecal output. At that time, the animal’s clinical abnormalities included anemia, azotemia, hyperphosphatemia, and hypoglycemia. The following day, the animal was presented to another emergency service after it stopped eating and moving.

At the emergency service, the rabbit was dull, unresponsive, and laterally recumbent. On physical examination, the animal was bradycardic and had bilateral lenticular opacities. A blood glucose test revealed severe hypoglycemia (27 mg/dL; reference interval,1 75 to 155 mg/dL). Following placement of an IV catheter, the rabbit had a seizure-like episode and cardiac arrest. Cardiopulmonary resuscitation was initiated but resulted in no spontaneous return of circulation.

Histological examination of the masses expanding the right scrotum revealed 2 separate neoplasms, one arising from the scrotal dermis and the other arising from the testis. Microscopically, the grossly black mass was a poorly demarcated, infiltrative, and unencapsulated neoplasm, composed of sheets of highly pleomorphic, polygonal to spindle-shaped cells. Each neoplastic cell had distinct cell borders and a moderate amount of eosinophilic cytoplasm containing 1 to 4 markedly irregular nuclei with several distinct nucleoli (Figure 2). Neoplastic cells contained variable amounts of black and granular intracytoplasmic pigment that stained black with Fontana-Masson stain. Mitoses were 42/2.4 mm2 (equivalent to 10 FN22/40X fields). Cellular pleomorphism was marked, with up to a 25-fold variation in cell size. Approximately 30% of neoplastic cells had strong cytoplasmic immunoreactivity for melanoma associated antigen (PNL2), and no neoplastic cells were immunoreactive for S100 (positive controls, including canine spinal cord and internal nerves within the tissue, were immunopositive for S100; negative controls, which included replacing primary antibody with normal control serum, had no immunoreactivity). Approximately 40% of the mass was necrotic, with scattered vessels containing intraluminal coccobacilli. Similar neoplastic cells effaced an inguinal lymph node.

Granular cell tumors in rabbits, dogs, cats, guinea pigs, rats, horses, a ferret, and a bird have been described.13–16 In dogs, GCTs most frequently develop in the oral cavity,13 whereas in horses, GCTs are primary pulmonary neoplasms.17 Other reported locations in various species include the CNS, skin, heart, periocular tissue, and external genitalia.13,15,16,18 Granular cell tumors in human testes have rarely been described.19 To the authors’ knowledge, testicular GCTs have not been reported for species other than rabbits and humans. The cellular origin of GCTs is unknown but likely varies by location and species, with speculation of a Schwann or Leydig cell origin.10,13

Histologically, GCTs are characterized by a monomorphic population of polygonal neoplastic cells with abundant granular, eosinophilic cytoplasm and a small, round, eccentrically located nucleus. Mitoses are frequently rare. In the case described in the present report, the use of histochemical and immunohistochemical stains and transmission electron microscopy were necessary to rule out other differential diagnoses, including an interstitial cell tumor, oncocytoma, and less likely a rhabdomyoma. Differentiation of these neoplasms is difficult by examination of H&E-stained sections alone, especially in a rabbit testis wherein either interstitial cell tumors or GCTs may develop. Cytoplasmic granules are variably PAS reaction-positive and variably diastase resistant.3,10 Differentiation between interstitial cell tumors and GCTs should not be based on PAS reaction findings alone because both neoplastic cell types can have PAS-reactive granularity in their cytoplasm. In rabbit GCTs, the neoplastic cells often react positively for vimentin and melan-A, variably for neuron-specific enolase, and negatively for cytokeratin, smooth muscle actin, desmin, CD68, inhibin-α, and synaptophysin.3 In the rabbit of the present report, the cells were immunoreactive for melan-A and not reactive for cytokeratin and S-100. On transmission electron microscopy, GCTs are characterized by abundant intracytoplasmic and membrane-bound secondary lysosomes that contain amorphous debris and fragmented organelles,3 as seen in this case. Given the variability in results of neoplastic tissue staining and reactivity, transmission electron microscopy was the most definitive way to discriminate between GCTs and other differential diagnoses for this rabbit.

Additionally, this rabbit has sepsis, which probably originated from the infected melanoma and likely resulted in the acute decline in the animal’s condition. The septicemia presumably led to the severe hypoglycemia, resulting in severe seizures and death. Acute necrotizing lesions were present within the spleen and kidneys, with large numbers of gram-positive, coccoid bacteria and vasculitis in the kidneys. The morphology of organisms grown in aerobic bacterial culture of kidney tissue was consistent with Corynebacterium spp. Corynebacterium bovis has previously been isolated from a testicular abscess in a rabbit and resulted in a similar lesion when experimentally inoculated into healthy rabbits.23 In the rabbit of the present report, the Corynebacterium spp was presumed to be opportunistic, secondary to the immunosuppression and necrosis resulting from the neoplastic disease.

Prognosis differs for rabbits with testicular GCTs or cutaneous malignant melanomas. Surgical castration is generally considered curative for testicular GCTs. Malignant melanomas, as seen in the present case, frequently metastasize in rabbits and are associated with guarded prognosis.12,20,22 Because of the tumor-specific variation in prognosis for rabbits with testicular tumors, any enlarged testis and the contralateral testis should be removed surgically and the tissues should be examined histologically. Further research is needed to characterize the prevalence, prognosis, and biological behavior of rabbit testicular tumors.