Postmortem images of the heart dissected to show the right atrium and ventricle (A) and cut section of lung (B) from an 18-year-old 439-kg American Quarter Horse mare that had lethargy, inappetence, weakness, ill-defined intermittent lameness, and weight loss of 4 weeks’ duration. A—The tricuspid valve is markedly thickened and is effaced by firmly adhered tan-white, friable material (arrows). Bar = 2 cm. B—An occlusive tan-white intravascular thrombus (arrowhead) is in a medium-size vessel within the pulmonary parenchyma. Bar = 1 cm.

Postmortem images of the heart dissected to show the right atrium and ventricle (A) and cut section of lung (B) from an 18-year-old 439-kg American Quarter Horse mare that had lethargy, inappetence, weakness, ill-defined intermittent lameness, and weight loss of 4 weeks’ duration. A—The tricuspid valve is markedly thickened and is effaced by firmly adhered tan-white, friable material (arrows). Bar = 2 cm. B—An occlusive tan-white intravascular thrombus (arrowhead) is in a medium-size vessel within the pulmonary parenchyma. Bar = 1 cm.

Photomicrographs of sections of the tricuspid valve from the horse described in Figure 1 depicting dense aggregates of fibrin admixed with viable and degenerate neutrophils, necrotic cellular debris, and myriads of cocci bacteria. H&E stain; bar = 200 µm (A) and 50 µm (B). 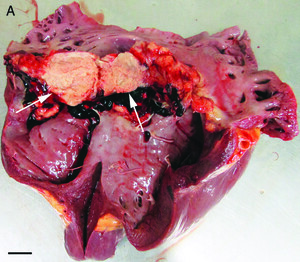 An 18-year-old 439-kg American Quarter Horse mare was referred because of lethargy, inappetence, weakness, ill-defined intermittent lameness, and weight loss of 4 weeks’ duration. The mare had been treated with trimethoprim-sulfa (dosage unknown). Referral was prompted by acute paresis and collapse in the hind quarters.

The mare was weak, dehydrated (5%), and quiet. Body condition (4/9) was diminished, with loss of epaxial musculature. Rectal temperature was 36.2 °C (reference range, 37.2 to 38.6 °C), heart rate was regular and rapid (68 beats/min; reference range, 28 to 44 beats/min), and the respiratory rate was high (44 breaths/min; reference range, 8 to 24 breaths/min). Bilateral jugular venous pulses were prominent. Mild ventral subcutaneous edema was present in the pectoral region. Auscultation revealed a harsh-sounding grade 5/6 pansystolic murmur loudest over the tricuspid valve area of the right hemithorax (grade 2/6 systolic murmur was heard in the left hemithorax). Dark urine was passed.

On necropsy, the mare had a markedly globose heart due to asymmetric dilation of the right ventricular lumen. The tricuspid valve leaflets were circumferentially effaced by firmly adhered tan-white, friable material, up to 4 cm thick (Figure 1). Intravascular tan-white thrombi were multifocally present in medium-to-large vessels throughout the lungs, often occluding > 90% of the vessel lumen. The endothelial surface of the pulmonary artery had numerous linear striations with a roughened surface.

The right tricuspid valve leaflets were effaced by dense aggregates of fibrin admixed with viable and degenerate neutrophils, necrotic cellular debris, and myriads of cocci bacteria (Figure 2). Although some early fibrosis was evident using Masson trichrome staining (for collagen), a degree of multifocal and coalescing myofiber separation in the right ventricular wall was primarily attributed to tissue edema.

Medium and large blood vessels throughout the lungs contained fibrin thrombi (with evidence of recanalization) admixed with a few neutrophils and erythrocytes. The kidneys multifocally contained moderately congested capillaries with increased intravascular aggregates of neutrophils.

Case summary: severe vegetative (bacterial) endocarditis of the tricuspid valve with secondary pulmonary fibrin thromboembolism and right-sided heart failure in a horse. Intravascular neutrophils within the kidneys were likely attributable to the patient’s circulating neutrophilia.

Vegetative bacterial endocarditis is a rare condition in horses and is most commonly reported to affect the mitral and aortic valve leaflets.1–7 In this case, the clinical presentation was broadly consistent with previously reported cases, including a relatively short course of illness in which lethargy, weight loss, lameness, reluctance to move, and weakness were reported.2,8 The mare in this report was relatively old when compared with the age range typically reported for horses affected with bacterial endocarditis (less than 6 years of age).1–6 However, the disease has been reported to occur in older horses.7 Clinical signs in this mare did not improve following institution of antimicrobial treatment, and referral was precipitated by complicating paresis and collapse.

Horses affected with bacterial endocarditis often develop bouts of fever. Absence of fever at time of admission could have been attributed to the fact that the mare had been treated with antimicrobials and flunixin meglumine prior to referral. Physical examination findings were consistent with a diagnosis of severe tricuspid valve endocarditis and right-sided congestive heart failure, including resting tachycardia, presence of jugular pulses, ventral subcutaneous edema, and a prominent right-sided systolic murmur in the region of auscultation for the tricuspid valve.8

Echocardiographic imaging of the mare’s tricuspid valve demonstrated oscillating intracardiac heterogenic masses with shaggy edges on the tricuspid valve leaflets, providing further evidence supporting severe tricuspid valve endocarditis. Whereas echocardiography, a noninvasive technique, often reveals valvular abnormalities consistent with bacterial endocarditis, diagnosis of bacterial endocarditis is difficult to confirm in some cases.5 An approach that incorporates clinical, microbiological, and echocardiographic findings has been codified (modified Duke criteria) to establish diagnosis of bacterial endocarditis and has been widely adopted by human cardiologists.9,10 Diagnostic criteria are subdivided into “major” and “minor” factors, and antemortem diagnosis of bacterial endocarditis is confirmed by the demonstration of either 2 major criteria (ie, positive results with typical infective endocarditis organisms isolated on bacterial culture of blood and echocardiographic evidence of an oscillating intracardiac mass on a valve or supporting structures in the path of regurgitant jets), 5 minor criteria (predisposition, fever, vascular event [eg, arterial emboli, pulmonary infarcts, mycotic aneurysms, intracranial hemorrhage, conjunctival hemorrhage], immunologic phenomena [eg, glomerulonephritis], suggestive findings on echocardiography, or either positive results for bacterial culture performed on blood that do not meet a major criterion or serologic evidence of active infection with organism consistent with endocarditis), or 1 major and 3 minor criteria. When similar criteria were applied for the mare of the present report, a definitive diagnosis was confirmed by 3 positive blood cultures and the echocardiographic finding of mobile vegetative masses attached to the tricuspid valve apparatus (both representing major criteria).9,10

Tricuspid valve endocarditis is associated with bacteremia. As with this mare, dissemination of bacteria or immune complexes may cause infection or inflammation of appendicular connective tissues with resultant soft tissue swelling and varying degrees of lameness in affected horses. Evidence for an infectious process affecting specific synovial structures was not identified at postmortem examination; thus, immune-mediated polyarthritis was also considered possible in this case.

As with this mare, a diagnosis of bacterial endocarditis and systemic bacteremic dissemination may be further supported by microbiological cultures of blood samples. However, the use of antimicrobials during clinical management can preclude acquisition of positive blood culture results. In spite of antimicrobial treatments administered to this mare prior to admission, blood culturing consistently identified a nontypable Group A Streptococcal organism. Moreover, cocci bacteria were also readily observed within the tricuspid valve at necropsy. Although a broad range of bacterial pathogens have been identified in horses affected with bacterial endocarditis, Streptococcus spp, Actinobacillus spp, and Pasteurella spp represent those most commonly reported.3,8,11 Although bacterial culture of the diseased heart valve leaflets postmortem yielded 4 different isolates (Escherichia coli, Streptococcus suis, Stenotrophomonas maltophilia, and Clostridium perfringens), they likely represented postmortem contamination. Ideally, a postmortem sample for bacterial culturing would be procured after sterilizing the surface of the selected tissue using a soldering spatula or iron.12 In addition, all samples should be collected within 24 to 48 hours of death and prior to the evisceration portion of the examination.12 Unfortunately, a strictly aseptic postmortem sample of the interior of the diseased valve leaflets for bacterial culturing was not obtained in this case.

The finding of extensive pulmonary fibrin thrombi in medium- and large-sized blood vessels throughout both lung fields was attributed to downstream dissemination from the affected tricuspid valve (thromboembolism). Many of those thrombi had been recanalized, suggesting an underlying chronic disease process. Although secondary renal infection (and infarction) is often reported in horses affected with aortic or mitral valve endocarditis, renal disease in the mare of this report was more likely explained by the effects of right-sided heart failure (hypoperfusion) and systemic inflammation (glomerulonephritis).1,2 Clinical evidence for renal failure in this case included passage inappropriately dilute urine, proteinuria, and hematuria. Plasma biochemical abnormalities associated with renal failure (azotemia, hyponatremia, hypochloremia) and ultrasonographic findings consistent with renal parenchymal abnormalities were also present in this case. Gross or histopathologic evidence for an infective lesion in the kidneys was not identified, as would have been more likely identified in cases with aortic or mitral valve endocarditis.

As was the case for this mare, a satisfactory explanation for the development of vegetative bacterial endocarditis is rarely identified.1–3 For example, tricuspid valve endocarditis may result from bacteremic dissemination in septic horses affected with internal abscesses (such as with metastatic Streptococcus equi subsp equi infections) or by extension from septic jugular thrombophlebitis lesions in individuals equipped with jugular catheters or in which bacterially contaminated products have been administered via jugular vein injection. In this case, there was no history of prior illness or other concurrent infectious disease and evidence for either jugular thrombophlebitis or other chronic internal disease (such as an abscess) was not identified postmortem.1–3

Bacterial endocarditis is sometimes recognized in very young or in very old horses, for which a role for immune dysfunction should be considered as a predisposing factor.5–7 It has also been theorized that vegetative endocarditis resulting from invasion of the heart valve surface by circulating bacteria is more likely when there has been a degree of preexisting disruption of the endocardial surface (lesions resulting from endocardiosis or congenital intracardiac shunts). A congenital shunt was not present in this case, and the possibility of preexisting noninfectious valve disease could not be ruled out because the affected valve leaflets had been so severely deformed by the infective vegetative disease.