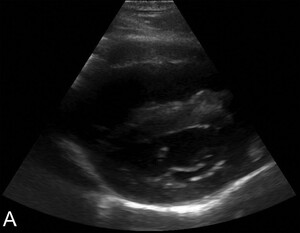 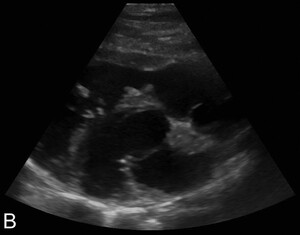 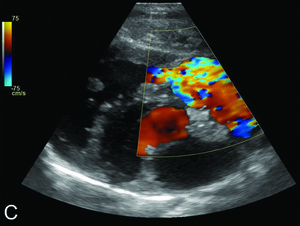 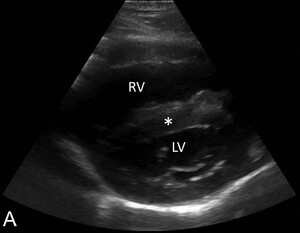 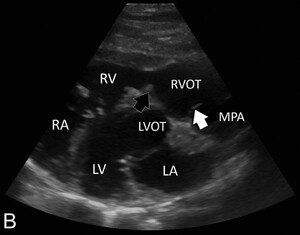 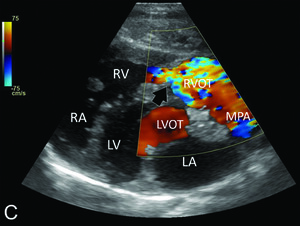 A 3-year-old 4.43-kg sexually intact male Bengal cat that was indoor only was presented by a rescue organization for evaluation of a previously diagnosed heart murmur in preparation for routine castration. The cat was surrendered to the rescue organization 2 weeks prior because the owner had passed away; thus, available history was limited. The cat had been vaccinated against rabies and feline viral rhinotracheitis, calicivirus, and panleukopenia, and a heart murmur had been diagnosed at an unknown point previously. The cat’s littermate was apparently healthy with no heart murmur noted by a previous veterinarian.

On physical examination, the cat was bright, alert, and responsive. Pulse deficits were noted, characterized by a heart rate of 220 beats per minute but a femoral pulse of 80 beats per minute. Thoracic auscultation revealed a grade 6/6 systolic heart murmur with clear lung sounds and a respiratory rate of 44 breaths/min. Mild gingivitis was noted, and both testicles had descended.

The patient was neutered following cardiothoracic workup. The cat was premedicated with methadone. Anesthesia was induced with alfaxalone and maintained on isoflurane delivered in oxygen. Surgery, anesthesia, and recovery occurred uneventfully.

Recommendations for the patient included empiric treatment with a β-adrenergic antagonist, continued restriction to an indoor-only lifestyle, and further consultation with a cardiologist or internist. The patient was discharged following recovery from surgery and has since been lost to follow-up after being placed with a family in the northeastern United States.

Normal thoracic radiographic findings combined with this patient’s cardiovascular physical examination abnormalities (murmur and pulse deficits) highlight the necessity of echocardiography in adult animals with murmurs but no structurally apparent radiographic changes. This is especially true in cats since there is extensive subjective overlap in auscultatory characteristics of pathologic and nonpathologic murmurs in this species.2 In this case, echocardiography was essential in determining that DCRV was the exact cause of the patient’s murmur given its rare prevalence (< 1%) among cases of feline congenital cardiac diseases.3 Understanding the pathologic characteristics of DCRV helps with its identification on echocardiography and differentiation from other more common congenital cardiac diseases affecting the RVOT, mainly pulmonic stenosis.

Double-chambered right ventricle is characterized by an anomalous band of fibromuscular or muscular tissue that arises from the right ventricular free wall and connects to the interventricular septum.4–6 This divides the right ventricle into 2 chambers: a proximal, high-pressure chamber comprised of the apical and main portion of the ventricle; and a distal, low-pressure chamber that primarily includes the RVOT.4 The presence of the anomalous muscular tissue creates a pressure gradient that results in pressure overload and hypertrophy of the proximal portion of the right ventricle. Animals can progress to eventual right-sided heart failure if left untreated.4 However, most cats with DCRV do not show clinical signs of heart disease at the time of presentation; often these cats are presented for routine wellness examination, and a heart murmur is auscultated prompting further work-up.4 These heart murmurs can range in grade with the point of maximum intensity varying from the left chest wall to the right.4–6

In the largest reported case series of 9 cats diagnosed with DCRV, echocardiography revealed several consistent findings, all of which were seen in this case.4 The most important finding is a heterogeneously hyperechoic band of tissue within the RVOT that is located proximal (approx 7 to 15 mm) to a structurally normal pulmonic valve with resultant high-pressure, turbulent blood flow.4 Other findings include flattening of the interventricular septum, mild to marked dilation of the right atrium, and hypertrophy of the right ventricular free wall.4,6 In 1 study,4 the mean pressure gradient of the RVOT was 130 ± 50 mm Hg. However, the location of the abnormality creates the potential for a suboptimal angle of interrogation, leading to falsely low pressure gradients, which may have contributed to a measured pressure gradient of only 62.9 mm Hg in this patient. Cardiac catheterization and angiography have not been shown to be useful in further characterizing DCRV, making echocardiography the noninvasive modality of choice for diagnosing this condition.4,5 Other congenital cardiac disorders, including ventricular septal devect and tricuspid valve dysplasia, are commonly seen in patients diagnosed with DCRV.4 In this case, no other cardiac abnormalities were detected based on thoracic radiography and echocardiography. However, it is worth noting that small ventricular septal defects are often not diagnosed antemortem.4

Double chambered right ventricle must be differentiated from pulmonic stenosis, a more common (prevalence of 10%)3 cause of congenital RVOT obstruction in cats with similar physical examination and radiographic findings. Pulmonic stenosis and DCRV may show similar changes to the right ventricle on echocardiography, but visualization of the anomalous tissue bundle within the RVOT proximal to the structurally normal pulmonic valve allows for the proper diagnosis of DCRV.4 In contrast, pulmonic stenosis can be diagnosed via echocardiography when abnormal morphology is identified within the RVOT at the level of or distal to the pulmonic valve with resultant post stenotic dilation of the main pulmonary artery.

Medical and surgical treatments have both been attempted for cats diagnosed with DCRV.4–6 In 1 report, 5 cats with DCRV kept on β-adrenergic antagonists remained asymptomatic until the time of follow-up (median, 3.6 years; range, 3.3 to 5 years).4 Other common medical treatments include the use of an angiotensin-converting enzyme inhibitor and diuretics to manage clinical signs associated with right-sided heart failure.4–6 Surgical techniques are less defined in cats with this condition, such as balloon dilation and partial right ventriculectomy using an incised patch technique.5,6 Since DCRV is a rare defect in cats, much information is still needed to further characterize this condition, ideal treatment, and long-term outcomes. However, the diagnosis of DCRV and differentiation from more common congenital diseases like pulmonic stenosis are possible due to echocardiography. Treatment goals and outcomes will vary based on the presence and severity of right-sided heart disease at the time of diagnosis. Regular follow-up examinations with echocardiography should be incorporated into the management of these patients for long-term care.