Mediolateral (A) and dorsoplantar (B) radiographic images of the left tarsal joint of a 6-year-old 55.8-kg spayed female Great Dane referred for evaluation of progressive soft tissue swelling of approximately 1-year duration at the level of the left tarsus.

Same image as in Figure 1. A large, well-defined, lobular, and smoothly marginated soft tissue opaque mass (arrowheads) is centered on the tarsocrural joint. There is moderate continuous, relatively well-defined, smooth, and solid periosteal proliferation along the distal third of the tibia and the fibula, which coalesces with marked interrupted, irregular, ill-defined, and spicular periosteal proliferation along the medial aspects of the tibial diaphyseal and metaphyseal regions, also seen to a lesser extent along the distolateral aspect of the calcaneus. The proximal extent of the periosteal proliferation along the tibia and the fibula has a narrowing triangular contour (arrows). Multifocally along the cortical margins of the distal tibia and fibula, the talus, and the calcaneus, there are multiple, well-defined, smoothly marginated, and rounded to oval concave regions of lysis with variable involvement of the underlying cancellous bone. Dorsal and medial to the talus, there is a small, ovoid, ill-defined, irregularly marginated, and heterogeneously mineral opaque body (asterisk). 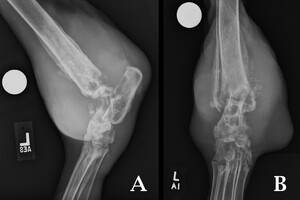 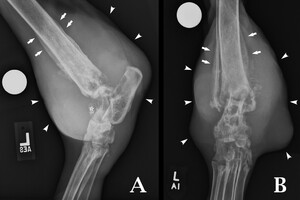 A 6-year-old 55.8-kg spayed female Great Dane was referred for evaluation of progressive left tarsal soft tissue swelling of approximately 1-year duration. On initial examination by the primary care veterinarian, a 2-cm lobular, flocculent, and seemingly nonpainful soft tissue swelling was noted over the left medial distal aspect of the tibia. Radiography revealed mild soft tissue swelling overlying the medial distal aspect of the left tibia without osseous abnormalities. Cytologic analysis of the left tarsal joint synovial fluid identified mild inflammatory changes with no evidence of infection (confirmed by aerobic culture) or neoplasia. At that time, a traumatic tear of the tarsal joint capsule was suspected, and the patient was prescribed carprofen (2.2 mg/kg, PO, q 12 h). Approximately 10 months later, the patient was returned with progressive clinical signs. The soft tissue swelling continued to seem nonpainful, and no tarsal instability was noted; however, the swelling had progressed to 7 cm in diameter, was firm, and extended distally into the left tarsus. A low-grade left pelvic limb weight-bearing lameness and moderate muscle atrophy were also observed. The patient was discharged with another prescription of carprofen (2.2 mg/kg, PO, q 12 h) and referred for further evaluation.

Centered on the tarsocrural joint, a large (9.9 X 10.2 X 14.8 cm [length X height X width]), well-defined, and smoothly marginated soft tissue opaque mass extended from the distal third of the tibia to the level of the tarsometatarsal joints (Figure 2). Associated with this mass, moderate continuous, smooth, relatively well-defined, and solid periosteal proliferation was identified along the distal third of the tibia and fibula, which coalesced with marked interrupted, irregular, ill-defined, and spicular periosteal proliferation along the medial aspect of the tibial diaphyseal and metaphyseal regions. The proximal extent of the periosteal proliferation along the tibia and fibula was progressively narrow resulting in a triangular contour. Similarly, but less pronounced, an irregular, ill-defined, and spicular periosteal proliferation was noted along the distolateral aspect of the calcaneus. Centered on the tarsocrural joint and along the cortical margins of the distal aspects of the tibia and fibula, the proximal aspect of the talus, and the dorsal aspect of the calcaneal tuberosity, there were multiple, well-defined, smoothly marginated, and rounded to oval concave regions of lysis with variable involvement of the underlying cancellous bone. Immediately dorsomedial to the mid talus, there was a small, ovoid, ill-defined, irregularly marginated, and heterogeneously mineral opaque body, measuring approximately 1.3 X 0.7 cm. These combined findings were suggestive of a joint-centric left tarsocrural mass with erosive features. The primary differential diagnosis was a malignant joint-associated neoplasia, such as a cytokeratin-positive joint-associated sarcoma (formerly known as synovial cell sarcoma) or histiocytic sarcoma.

Due to the high suspicion of a malignant joint-associated neoplasm, and marked osseous involvement, amputation of the limb was recommended. Thoracic radiography on the day of diagnosis and thoracic radiography and abdominal ultrasonography on day 46 after diagnosis showed no evidence of metastatic neoplasia or concomitant disease.

Left pelvic limb amputation by coxofemoral disarticulation was performed, and the limb was submitted for histopathology. The soft tissues surrounding the tarsocrural joint were grossly markedly thickened with a cut surface that was soft to firm, irregular, and occasionally contained areas of hemorrhage and/or necrosis with extension into the joint capsule. Histopathology revealed a densely cellular, poorly demarcated, unencapsulated neoplasm invading the cortical bone of the distal tibia, talus, and calcaneus with effacement of adjacent soft tissues. The neoplasm was composed of mesenchymal cells forming streams and bundles supported by a fine fibrovascular stroma. Neoplastic cells multifocally formed a brightly eosinophilic osteoid matrix. The osteoid frequently entrapped 1 or multiple neoplastic cells within lacunae. The number of mitotic figures varied from 3 to 13 identified in 10 hpfs (400X; 2.37 mm2). The histopathologic findings were diagnostic for osteosarcoma. The predominantly periosteal location and invasion along fascial planes were compatible with a peripheral osteosarcoma, such as parosteal osteosarcoma with malignant progression. The dog underwent chemotherapy, receiving carboplatin (Accord Healthcare Inc) administered IV every 3 weeks, with 300, 297.3, and 299.3 mg/m2 administered on weeks 0, 3, and 6, respectively. Six doses had been planned; however, the dog died unexpectedly 3 months after diagnosis. Postmortem examination was not performed.

The present report described a rarely reported primary bone neoplasia (ie, parosteal osteosarcoma) with radiographic features similar to those described for joint-associated neoplasms. On radiography, previously described imaging characteristics may help prioritize a diagnosis of a joint-associated neoplasm.1,2 These neoplams first form a joint-centric soft tissue mass with ill-defined and irregular spiculated periosteal proliferation, which commonly progresses to form well-defined and rounded regions of cortical lysis variably extending into the subcortical bone adjacent to the soft tissue mass.1,2 Although the radiographic findings of the current report resembled the ones previously described for joint-associated tumors, the lesions were in fact an atypical presentation of parosteal osteosarcoma.

Parosteal osteosarcomas are relatively uncommon and form slow-growing osteoproliferative masses that arise from the periosteum. These tumors are histologically low grade but can progress into aggressive masses, resulting in regional lysis as described in the current case.3 In this case, the triangular contour of the periosteal proliferation of the tibia may represent the elevation of the periosteum, consistent with a Codman triangle. Recognition of this finding may prioritize osteosarcoma as a differential diagnosis; however, a Codman triangle is not pathognomonic for osteosarcoma, and the extent of the joint-centric erosive lesions made it a lesser consideration on radiographic interpretation. In humans, classic radiographic appearance of parosteal osteosarcomas includes a lobulated and exophytic mass with central dense ossification adjacent to the bone. Another radiographic feature is the presence of a cleavage plane separating the tumor and adjacent normal cortex, known as the “string sign.”4 These features were not identified in the current case and could not help in distinguishing parosteal osteosarcoma from joint-associated neoplasia.

Histopathologically, the abundant osteoid production at the level of the distal tibia supported the diagnosis of osteosarcoma. The current case was of interest due to the extensive articular involvement, which had not been previously described with parosteal osteosarcomas. Parosteal osteosarcomas are slow growing but can induce pain at the local site as eventually observed in the current case.3 Metastases can occur, but the prognosis for long-term survival is much better than for intraosseous osteosarcoma.3 Limb amputation is the first method of treatment to prevent or delay tumor metastasis and reduce morbidity. The long-term effects of chemotherapeutic agents are lacking but remain a consideration to prevent or delay tumor metastasis.

The radiographic features of parosteal osteosarcoma have been scarcely described in dogs. In this case, the radiographic findings differed from those previously reported in humans and were suggestive of a joint-associated neoplasm. Therefore, parosteal osteosarcomas may be considered as another differential diagnosis in cases with radiographic lesions similar to those described with joint-associated neoplasms. A reliable presumptive diagnosis cannot be made radiographically, and histopathology plays a crucial role in the diagnosis of these different tumor types and guide therapeutic and prognostic recommendations.