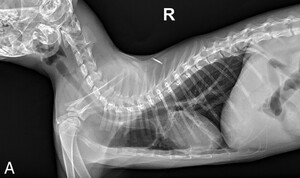 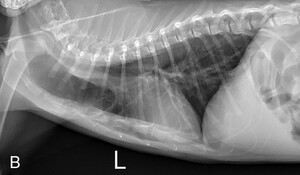 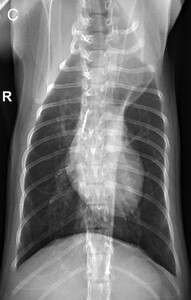 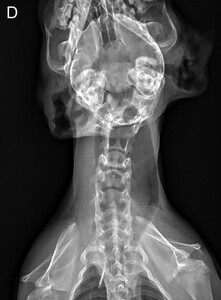 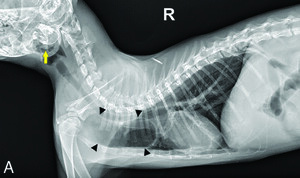 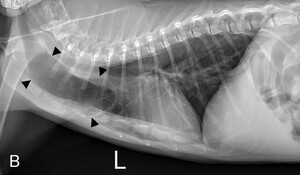 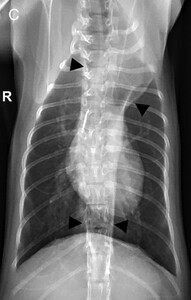 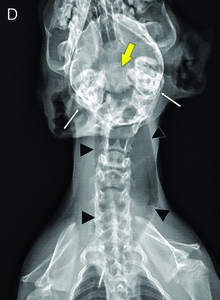 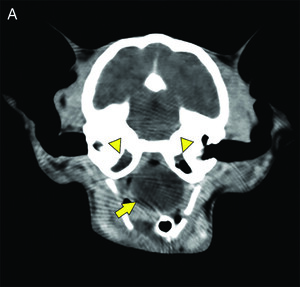 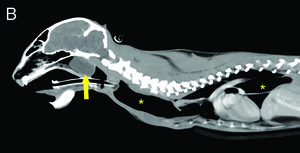 A 15-week-old 1.6-kg sexually intact female domestic shorthair kitten was evaluated because of severe dyspnea. The cat was recently adopted from a shelter. On presentation, the cat was tachypneic and had increased bronchovesicular sounds in all fields, loud upper airway noises, an exaggerated motion of the thoracic inlet with respiration, pronounced abdominal effort to respiration, and mild mucoid oculonasal discharge. Occasional retching and regurgitations were also reported by the owner. The respiratory signs were previously treated with 3 days of phenylephrine drops (1 drop in each nostril q 12 h), a 2-week course of doxycycline (15 mg, PO, q 24 h), and 2 days of amoxicillin-clavulanic acid (22 mg, PO, q 12 h), with only mild improvement of the respiratory signs. A moderate respiratory acidosis was noted on venous blood gas analysis. The rest of the clinical examination was within normal limits. Thoracic radiography was performed for further evaluation (Figure 1).

Thoracic radiography revealed a severely diffusely gas-dilated esophagus, more conspicuous at the cranial aspect of the cardiac silhouette, where the dilated gas-filled esophagus could be noted ventral to the thoracic portion of the trachea (Figure 2). There was no radiographic evidence of associated intraluminal esophageal foreign body or esophageal mural mass, and the pulmonary parenchyma was normal. The trachea was also normal in position, without left-sided deviation, and a vascular ring anomaly was therefore considered unlikely. Head and neck radiographic images were also obtained due to concern for a possible upper airway obstruction, as a cause for the megaesophagus identified on thoracic radiography and reported upper respiratory signs. Ventrodorsal and lateral radiographic images of the skull and cranial cervical region revealed a well-defined, round, soft tissue opaque mass in the pharyngeal region, most conspicuous on the ventrodorsal view, associated with severe gas dilation of the cervical portion of the esophageal lumen as well. Bilateral increased tympanic bulla soft tissue opacity was also noted.

Computed tomography of the head, neck, and thorax was performed for further assessment of these radiographic findings (Figure 3). A large (2.3 L X 1.5 W X 1.3 H cm), oval, fluid to soft tissue–attenuating mass (14 HU) was confirmed within the nasopharynx, with secondary severe ventral displacement of the soft palate and complete obstruction of the nasopharyngeal lumen. The mass was mildly contrast enhancing (around 14 HU precontrast and 20 HU postcontrast), with moderate rim-contrast enhancement noted (70 to 80 HU postcontrast). Also, within both tympanic bullae (right more than left), there was a mild amount of non–contrast-enhancing soft tissue–attenuating (right, 41 HU; left, 58 HU) material, with normal bulla wall thickness otherwise. The retropharyngeal lymph nodes were normal in size. The thorax was normal, besides the gas dilated esophagus, and there was no evidence of vascular ring anomalies, strictures, or abnormal lower esophageal sphincter. The imaging findings were consistent with an upper airway obstruction by a nasopharyngeal mass, with primary differential diagnosis given to an inflammatory nasopharyngeal polyp. A nasopharyngeal abscess was considered less likely although not completely ruled out. Additionally, the soft tissue–attenuating material present within both tympanic bullae was suspected to be secondary to bilateral auditory tube obstruction by the mass and/or nasopharyngitis, with less consideration given to bilateral otitis media.

Two days after the initial presentation, the cat underwent surgery to remove the suspected polyp from the nasopharynx. Under endoscopic guidance, a 2-cm fleshy mass was easily removed with a hemostat and gentle traction without any complications. There was no evidence of extension of the nasopharyngeal mass into the tympanic bullae; however, a bulla osteotomy was not performed. An inflammatory polyp was confirmed histopathologically. The cat was treated with injectable antimicrobials (ampicillin-sulbactam, 48.4 mg, IV, q 8 h) and nebulizations 4 times daily during hospitalization. The kitten did not regurgitate while hospitalized and was discharged the following day with prescriptions of corticosteroid (prednisolone, 1.6 mg, PO, q 24 h tapered over 9 days) and gastrointestinal protectant medications (cisapride, 1.5 mg, PO, q 12 h; and omeprazole, 2.5 mg, PO, q 12 h). Mild gas dilation of the esophagus was noted and moderately improved on the 1-month postoperative thoracic radiographic evaluation, although the cranial thoracic portion of the esophagus still remained moderately dilated, measuring 0.75 cm in diameter, compared to 1.65 cm previously.

Severe esophageal gas dilation on thoracic radiography, as in our case, should prompt clinicians to rule out a primary etiology, as megaesophagus is typically an acquired condition.1 Primary etiologies include neuromuscular, immune mediated, endocrine, gastrointestinal, paraneoplastic, or toxicosis; however, an idiopathic form and a heritable form of megaesophagus have been suggested in cats, particularly in Siamese cats.1 Upper airway obstruction, including obstructive nasopharyngeal polyps or nasopharyngeal stenosis, has also been reported as a possible etiology for megaesophagus and should be considered as a differential diagnosis as well.1,2 The secondary megaesophagus likely developed with chronic aerophagia and increased negative pressure within the thorax from the upper airway obstruction. Thoracic radiography commonly reveal a diffusely dilated, air-filled, or ingesta-filled esophagus with visible luminal margins.1 A hiatal hernia can also be present in upper airway obstruction cases and is speculated to be secondary to inspiratory dyspnea causing increased negative intrathoracic pressure.2 Additionally, concurrent aspiration pneumonia may be present and should be ruled out, as it is a common megaesophagus complication.1 Thoracic radiography can also be helpful to identify a primary cause for the megaesophagus. In our case, because of the young age (15 weeks old) and clinical presentation of the cat, radiographic images of the entire neck were acquired to rule out an upper airway obstruction, such as a nasopharyngeal polyp, as a primary cause for the severe megaesophagus. Nasopharyngeal polyps are nonneoplastic, soft tissue, polypoid masses that arise from the epithelium of the tympanic bullae, nasopharynx, or auditory tube.1 They are suspected to be reactive to a chronic inflammatory process, but the true etiology is unknown.1 Nasopharyngeal polyps can sometimes be diagnosed on skull radiography; however, false negative studies are common (up to 25%).2 Therefore, obtaining straight ventrodorsal and lateral views is very important and may require sedation. Additional open mouth and oblique views may aid in diagnosis of a nasopharyngeal polyp when CT is not available. Due to the prevalence of false negatives and ease for surgical planning, CT is more frequently performed, allowing earlier detection and a more detailed evaluation of the mass localization and extension.2 On CT examination, polyps often appear as well-defined, round, soft tissue–attenuating masses within the nasopharynx, tympanic bullae, or aural canals.3 Nasopharyngeal polyps that involve the tympanic cavity often cause bulla osteitis, which appears as thickened tympanic bullae on CT examination.4 Polyps often mildly contrast enhance, with variable, typically marked, enhancement of the polyp rim.4 Middle ear disease is often present on CT, characterized by soft tissue–attenuating material within either or both tympanic bullae.3 Polyps are easily removed by manual traction with forceps but have a high recurrence rate with this technique.2 Performing a ventral bulla osteotomy to remove the epithelial lining of the bulla, from which polyps can arise, may decrease the incidence of recurrence.2 Due to the proximity of cranial nerves VII and VIII to the tympanic bullae, facial paralysis, vestibular syndrome, and Horner’s syndrome are often temporary sequelae of the ventral bulla osteotomy but rarely persist long term.5 Supportive care is required while the megaesophagus is resolving, including appropriate nutrition with soft foods fed in small frequent meals with the animal in an upright position.5 Prokinetic medications such as metoclopramide or cisapride may also be used to encourage peristalsis of the lower feline esophagus, which is composed of smooth muscle.5