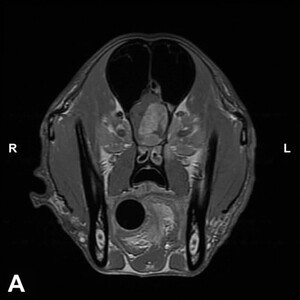 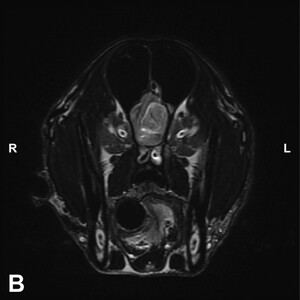 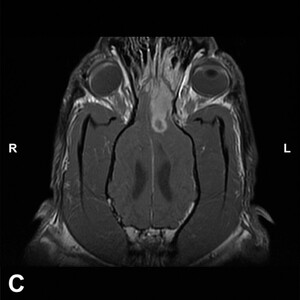 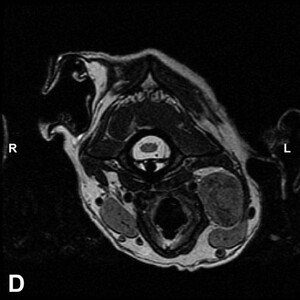 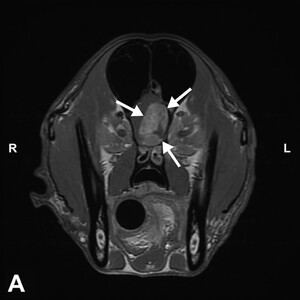 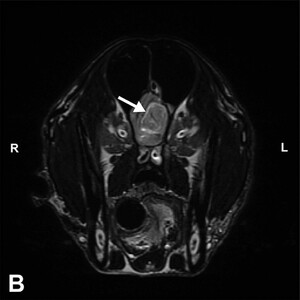 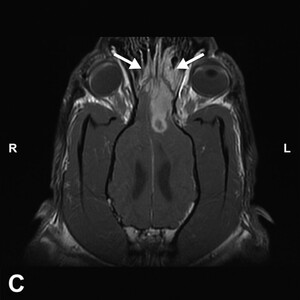 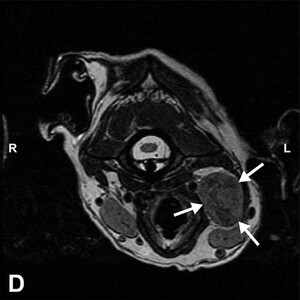 Findings of a CBC and biochemical analyses showed no clinically important abnormalities, and findings on thoracic radiography were unremarkable. A skull CT and an MRI with limited sequences were performed for radiation planning; however, remarkably, the imaging revealed no grossly visible disease aside from mild meningeal contrast enhancement over the left olfactory bulb (Supplementary Figure 2S Supplementary materials are posted online at the journal website: avmajournals.avma.org/doi/suppl/10.2460/javma.20.10.0592).

Based on the worsened clinical signs, the dog underwent general anesthesia for repeated CT and MRI fusion for radiation planning (Figure 1). A CSF sample was also collected.

The differential diagnoses for an extra-axial, strongly contrast-enhancing mass with nasal involvement and a cystic component would normally include an invasive meningioma or a nasal tumor that has eroded the cribriform plate. Other less common neoplasias such as olfactory neuroblastoma (esthesioneuroblastoma), histiocytic sarcoma, and lymphoma have also been described in this location. However, though never reported intracranially, given the definitive diagnosis of metastatic MCT in the lymph node, the dramatic response to prednisone administration, peripheral eosinophilia, and eosinophilic pleocytosis, MCT became our primary differential diagnosis.

Chemotherapy and radiation therapy were declined by the client, so prednisolone was continued (0.3 mg/kg, PO, q 24 h), and the dog remained clinically static until 2 months later when another generalized seizure occurred. At that time, the owner elected euthanasia and necropsy.

To the authors’ knowledge, this is the first case describing an intracranial MCT. Mast cell tumors have been reported in the CNS but only occurring as extradural spinal cord lesions.2,3

Nasal tumors have been reported to invade the calvarium in up to 27.7% of cases.4 However, there are no previously reported confirmed cases of a MCTs progressing in that manner. A case study of 4 dogs with intranasal MCTs reported 1 dog having a history of excessive sneezing and open-mouthed breathing.5 Eventually, the dog developed seizures, which were suspected to have been due to tumor extension into the brain. However, a necropsy was not performed to confirm this.5 For the dog of the present report, prosencephalic signs of seizures and abnormal mentation were noted first, followed by sneezing and mucoid nasal discharge several weeks later, and epistaxis 5 months later, suggesting that cerebral involvement may have preceded nasal involvement.

Upon repeating an MRI for purposes of radiation planning, the gross disease was no longer evident. The only treatment initiated was corticosteroids. However, once steroids were discontinued, the mass reappeared in the same location with similar MRI characteristics as previous. This striking response to prednisolone was an important feature to support round-cell neoplasia in this case. Furthermore, the findings of eosinophilic pleocytosis, peripheral eosinophilia, and lymphadenopathy supported mast cell neoplasia or possibly eosinophilic proliferative diseases. It is established that neoplastic lymphoid cells undergo induction of apoptosis by glucocorticoid treatment.6 Mast cell tumors have more varied responses to glucocorticoids that appear to be dependent on the degree of glucocorticoid receptor expression. In 1 study, 11 of 15 dogs with mast cell tumors partially or completely responded to prednisolone. Their tissues had higher glucocorticoid receptor expression, compared to those with glucocorticoid resistant tumors.7 However, studies thus far showed mixed results in determining a relationship between increased glucocorticoid sensitivity and pathological grade of the MCT.7,8 A traditional histologic grade was unable to be assigned for the tumor of the dog of the present report because the MCT was not cutaneous or subcutaneous; however, the poorly differentiated mast cells may indicate more aggressive behavior.9 Ultimately, it is still unknown which patients may benefit from the use of glucocorticoids given that glucocorticoid effects on apoptosis and factors involved in glucocorticoid resistance have yet to be fully determined.9

In conclusion, MCT should be included as a differential diagnosis for an extra-axial contrast-enhancing intracranial mass in dogs, especially when other supporting evidence is present, such as confirmed mast cell disease elsewhere, eosinophilic pleocytosis, peripheral eosinophilia, lymphadenopathy, or improvement on steroids.