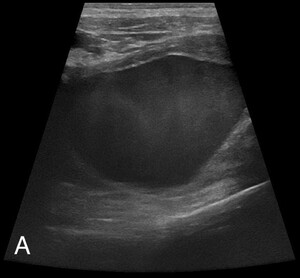 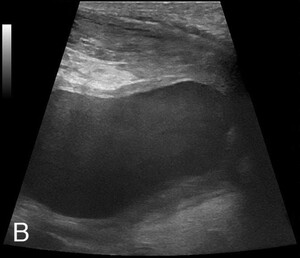 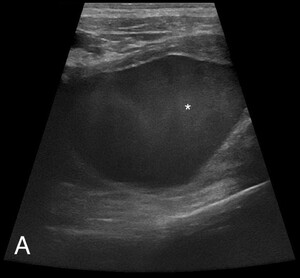 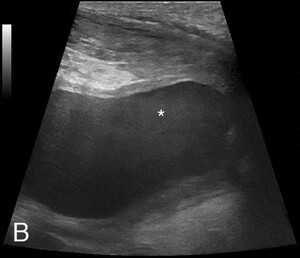 A 5-year-old spayed female Golden Retriever mixed-breed dog was presented for evaluation of a chronic draining wound over the right tarsus and bilateral hind limb edema. The dog had additionally been intermittently febrile and anorectic. Prior treatment with enrofloxacin, clindamycin, and doxycycline (unknown doses) by the primary veterinarian resulted in no improvement in the clinical signs or wound.

Upon examination, the patient was tachycardic (156 beats/min; reference range, 70 to 120 beats/min) and febrile (40.4 °C; reference range, 37.8 to 39.2 °C). Cardiothoracic auscultation and abdominal palpation were clinically normal. There was bilateral moderate inguinal lymph node enlargement; however, no other peripheral lymphadenopathy was palpated. There was a firm mass present along the caudoventral abdominal body wall with multifocal regions of ulceration and dried exudative material. There were additionally 2 alopecic, erythematous, lichenified lesions present along the lateral aspect of the right tarsus that showed multifocal regions of ulceration and had an exudative discharge. In addition, the entire right hind limb was edematous.

Results of a CBC were within reference limits. Biochemical analysis revealed a hyperproteinemia (8.5 g/dL; reference range, 5.5 to 8.0 g/dL) due to hyperglobulinemia (6.4 g/dL; reference range, 2.1 to 4.2 g/dL). Findings on thoracic radiography were unremarkable (not shown), and abdominal ultrasonography was performed (Figure 1).

Abdominal ultrasonography revealed bilaterally enlarged medial iliac lymph nodes (up to 2.4 cm in diameter) and a scant volume of anechoic peritoneal effusion. In addition, there was an ovoid, anechoic structure within the caudal abdomen that measured 4.5 cm in thickness with a 0.4-cm wall. This structure was confluent with the aorta at the aortic trifurcation. Spontaneous contrast with a pulsatile swirling motion was noted within the structure, which was in concert with the patient’s heartbeat (Figure 2). Interrogation with color flow Doppler ultrasonography revealed turbulent and swirling blood flow within the structure. The structure could not be completely interrogated with ultrasonography, as it coursed caudally and was obscured by the pelvis. The ultrasonographic diagnosis was an aortic pseudoaneurysm with probable thrombus formation. Given the dermal findings, an infectious etiology (either bacterial or fungal) resulting in the cutaneous lesions, lymphadenopathy, and aneurysmal dilation was considered likely.

The patient was sedated and underwent an incisional biopsy of a tarsal lesion, as well as a punch biopsy of the palpated abdominal wall mass. Biopsy samples were submitted for histopathology and aerobic and anaerobic culture. The patient recovered uneventfully and was discharged with instructions to restrict exercise for 2 weeks.

Due to the poor prognosis, the owners elected humane euthanasia prior to obtaining the result of the PCR assay. A necropsy was not performed. Results of the PCR assay indicated infection with Cladosporium spp.

Cladosporium spp are filamentous fungi belonging to the dematiaceous fungi and compromise a large portion of the genus Ascomycota.1 Cladosporium is a widely distributed saprophyte with 189 identified species and has been reported to cause infections of the lung, skin, eye, and brain of people, as well as the central nervous system, bone, lung, lymph node, and kidney in the dog.1–3 Certain strains of Cladosporium have been implicated in allergic airway disease in people as well.4 Lesions caused by this fungus are typically associated with phaeohyphomycosis and are localized to cutaneous or subcutaneous infections; spread of infection can progress either through lymphatic or hematogenous spread.1 In people, most reported infections occur in immunocompromised patients,1 although Cladosporium infection has been reported in canine patients with no known immunodeficiency.2

Mycotic pseudoaneurysms are typically reported to form in arteries that are adjacent to the focus of infection or are considered to be due to direct invasion of the vessel wall due to intraluminal foci of septic emboli.1 In this case, however, the aortic pseudoaneurysm was noted at a site distant to the cutaneous lesions. Interestingly, aneurysmal degeneration of the aorta can be induced with exposure to certain inflammatory cells and their proteolytic products, particularly serine elastases, plasminogen activators, and matrix metalloproteases.7 Several species of Cladosporium contain elastase, so it is possible that the elastase and other protease activity of this fungus contributed to the formation of this pseudoaneurysm.4

Computed tomography angiography and ultrasonography are currently the imaging modalities of choice for the imaging of arterial pseudoaneurysm.5 In early stages, pseudoaneurysms are reported to manifest on ultrasonography as a thickened and irregular wall, with a hypoechoic halo surrounding.5 Hyperechoic fat can also be seen surrounding affected arteries, which is suggested to be due to perivascular steatitis.5 Color flow Doppler ultrasonography typically reveals turbulent blood flow within the pseudoaneurysm.5 An endoluminal swirling pattern to the blood can also be seen on color flow Doppler ultrasonography; this is due to low-velocity and turbulent flow within the pseudoaneurysm.8 Identification of the causative organism in cases of fungal infection typically depends both on histopathologic evaluation of the affected tissues and special staining. In some cases, advanced diagnostic techniques such as PCR assay are required.1