Transverse (A and D), sagittal (B), and dorsal (C) multiplanar reconstruction postcontrast CT images of the head at the level of the right globe of a 9-year-old spayed female domestic shorthair cat evaluated for suspected right-sided retrobulbar disease. A, B, and C—Images are displayed in a soft tissue algorithm (window width, 350 HU; window level, 40 HU). D—The image is displayed in a bone algorithm (window width, 2,000 HU; window level, 300 HU).

Same CT images as in Figure 1. Ill-defined, contrast-enhancing, circumferential soft tissue thickening surrounds the right globe and extends along the rostroventral aspect of the eye causing dorsolateral displacement of the globe (white arrowheads). The supraorbital margin of the right frontal sinus is heterogeneously thickened and hypoattenuating with punctate lysis (black arrowheads), and the right zygomatic bone is thickened and sclerotic (relative to the contralateral side) and has ill-defined periosteal proliferation along the lateral surface (white arrows). 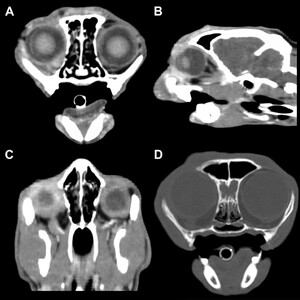 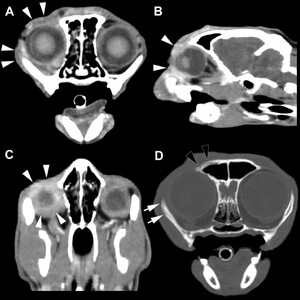 A 9-year-old 4.4-kg spayed female domestic shorthair cat was presented to the University of Wisconsin Veterinary Care for evaluation of suspected right-sided retrobulbar disease. Three months earlier, the cat was evaluated by its primary care veterinarian for a small, red, raised lesion on the inferior conjunctiva in the right eye [oculus dextrus (OD)]. No other abnormalities were reported on physical examination, and results of a CBC and serum biochemical profile were unremarkable. Neomycin-polymyxin-bacitracin ophthalmic ointment (q 8 h, OD) was prescribed. The lesion initially improved but persisted at the 1-month recheck examination. Thus, the antimicrobial ophthalmic ointment was discontinued, and treatment with 1% prednisolone ophthalmic suspension (q 8 h, OD) was initiated. Swelling and redness of the conjunctiva progressed over the course of 6 weeks. One week prior to referral, the cat was evaluated by a board-certified veterinary ophthalmologist and presumptive retrobulbar disease was diagnosed. Topical prednisolone was discontinued, and neomycin-polymyxin-bacitracin ophthalmic ointment (q 8 to 12 h, OD) was again prescribed. Amoxicillin-clavulanic acid (62.5 mg, PO, q 12 h) and prednisolone (prescribed on a tapering schedule beginning at 2.5 mg, PO, q 12 h) were also prescribed. An Elizabethan collar was recommended to be worn at all times. The following week, the cat removed the Elizabethan collar and traumatized the OD, causing profuse hemorrhage. The cat was then presented to the University of Wisconsin Veterinary Care for urgent evaluation.

Head CT revealed soft tissue–attenuating, mildly contrast-enhancing, thickened tissue surrounding the rostral aspect of the OD that extended rostroventrally, surrounded the globe circumferentially, and caused dorsolateral displacement of the globe (Figure 2). This thickened tissue extended caudally along the right temporalis muscle with focal contrast-enhancing, soft tissue thickening adjacent to the right frontal sinus. The supraorbital margin of the right frontal bone was heterogeneously thickened with punctate lysis, and the right zygomatic arch was thickened and sclerotic relative to the contralateral side with ill-defined solid periosteal proliferation along the lateral surface. The right mandibular and medial retropharyngeal lymph nodes were mildly larger than the contralateral side but were otherwise normal. The left eye was normal.

Diagnostic interpretation of imaging findings was a right periorbital mass with secondary mild exophthalmos and reactive periostitis or bony infiltration. Differential diagnoses included neoplasia, such as squamous cell carcinoma (SCC), feline restrictive orbital myofibroblastic sarcoma (FROMS), or lymphoma, with less likely consideration for infectious etiologies, such as fungal granulomas or bacterial abscess formation. Ultrasound-guided fine-needle aspiration of the mass was performed immediately after CT; however, cytology results were inconclusive due to low cellularity.

Palliative exenteration of the OD with orbital periosteal debridement was performed 2 days after CT, and the resected orbital contents were submitted for histopathology. Anesthetic recovery was uneventful, and the cat was discharged the following day with prescriptions of amoxicillin-clavulanic acid, prednisolone, and buprenorphine. Sutures were removed 2 weeks later without complication. Histopathology revealed a poorly demarcated, invasive mesenchymal neoplasm that diffusely infiltrated the eyelids and orbital tissues and that was composed of bland spindle cells within a variably dense collagenous stroma, consistent with FROMS with presumed incomplete margins. The corneal ulcer was confirmed histologically and found to be accompanied by mild keratitis.

Due to the diagnosis, the owners elected to monitor at home and palliate as needed. Routine recheck examination 4 months following suture removal revealed disease progression to the contralateral side, with mild, intermittent lagophthalmos of the left eye. Approximately 5 months following exenteration, a cutaneous nodular mass developed near the base of the right pinna, dorsal to the exenteration site. The size of the mass increased, and by 6 months after exenteration, contraction of the right facial skin and lip commissure were also observed. Progressive left-sided disease was also present 6 months postoperatively, with conjunctival hyperemia and chemosis, third eyelid protrusion, and sinking of the left eye. Euthanasia was elected 6 months following surgery. Necropsy was not pursued.

The utilization of diagnostic imaging, together with histopathology, was critical in the diagnosis, characterization, and treatment plan formation in this case of FROMS. Contrast-enhanced CT allowed for further characterization of the periorbital thickening, degree of extension into regional soft tissues, relationship with adjacent bony structures, and assessment of regional lymph nodes. The extent of disease evident on CT led to the decision to undergo exenteration as an aggressive therapeutic option. Diagnostic imaging alone did not allow for definitive diagnosis of FROMS due to imaging feature similarities with other neoplasia such as SCC. CT features coupled with restricted globe movement heightened clinical suspicion of FROMS in this case, and histopathology was necessary for definitive diagnosis.

FROMS, previously called feline orbital pseudotumor, is an uncommon and highly aggressive neoplasm characterized by progressive fibrosis of the periorbital subcutis.1,2 This condition most commonly affects middle-aged to older cats without an apparent sex or breed predisposition.2,3 Typical ocular examination findings of cats with FROMS include eyelid thickening, restricted eyelid mobility, decreased retropulsion of the globe, and exposure keratitis.1–3 The disease is initially unilateral and can commonly extend to the contralateral eye, the oral cavity, and other facial tissues.1,2 Bone involvement has been described in cases of FROMS, ranging from sclerosis and erosion to extensive and aggressive osteolysis.4,5 In the present case, periosteal reaction, bone sclerosis, and punctate osteolysis were thought to indicate benign, reactive change secondary to regional inflammation. Early tumor invasion could not be ruled out, and bony margins were not included in the surgical excision. When aggressive bony involvement is present, a more invasive procedure such as partial or complete orbitectomy may be necessary for the complete excision of all neoplastic tissue.

FROMS can be a clinical diagnostic challenge, with other tumors such as SCC with adnexal involvement having similar clinical and imaging features.3 Differentiation of these tumor types is important, as therapeutic options and outcomes are variable. Cats with FROMS more commonly exhibit exophthalmos and/or resistance to retropulsion compared to cats with SCC, and the presence of an overt eyelid or orbital mass on examination or diagnostic imaging is more common in cats with SCC than FROMS.3 Histopathologic evaluation can readily differentiate SCC from FROMS.3 SCC is characterized by invasive islands, cords, and trabeculae of variably pleomorphic epithelial cells, whereas FROMS appears as a highly infiltrative population of bland spindle cells with moderate collagen deposition and low mitotic index.1,2,4 The neoplastic entity of FROMS spreads along fascial planes and encircles preexisting tissues, causing atrophy of entrapped skeletal muscle and peripheral nerves,2 as was noted histologically in this case. Immunohistochemical staining of the spindle cells in FROMS for vimentin and smooth muscle actin can confirm myofibroblastic origin,3 though this was not deemed necessary in this case.

FROMS usually carries a poor prognosis, often progressing despite medical treatment with topical or systemic antimicrobials, topical or systemic anti-inflammatory or immunosuppressive doses of glucocorticoids, nonsteroidal immunomodulatory medications, and antiviral treatment.2,4 Neoplastic progression associated with FROMS involves extension along tissue planes and may eventually involve the face and lip folds, oral cavity, and contralateral orbit.3 Aggressive and early treatment via exenteration and adjunctive radiation therapy or chemotherapy may be considered for patients with FROMS.4,5 However, disease may progress locally even despite aggressive treatment, and ultimately, most cats are euthanized due to progressive disease within 1 year after initial presentation.2,6