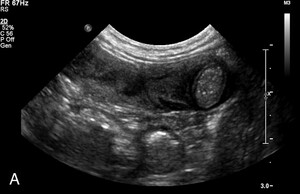 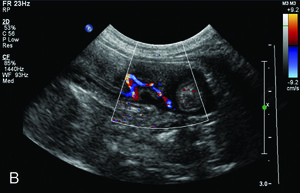 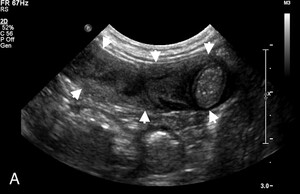 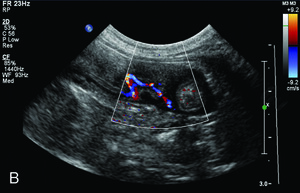 At the referral examination, the patient was bright, alert, and responsive. Physical examination findings included subjective thickening of the small intestines specifically in the mid abdomen, suspected abdominal lymphadenopathy, and a grade 3/6 left parasternal systolic heart murmur with the remainder of the examination being unremarkable. Abdominal ultrasonography was performed (Figure 1).

On abdominal ultrasonography, a scant amount of abdominal effusion was present. An echogenic asymmetric circumferential mass, measuring 1.7 X 1.0 cm, was present affecting a mid jejunal segment within the left caudal abdomen (Figure 2). There was focal loss of wall layering at the level of the mass, and blood flow within the mass was apparent with the use of color-flow Doppler ultrasonography. The remainder of the small intestinal segments were ultrasonographically unremarkable and did not show increased thickness or wall layer alterations. A few jejunal lymph nodes were mildly enlarged up to 7.1 mm in thickness (reference range, 2 to 5 mm). The primary differential diagnosis for the asymmetric circumferential mass affecting a portion of the small intestines was neoplasia such as round-cell neoplasia (large-cell lymphoma) or carcinoma. Feline gastrointestinal eosinophilic sclerosing fibroplasia and mast cell tumor, which can present similarly in feline intestines as asymmetric circumferential and/or eccentric masses, were also considered as possible but less likely causes of the mass lesion. Differential diagnoses for mild jejunal lymphadenopathy included a reactive process or spread of neoplasia. The only other notable findings included a moderate amount of echogenic fluid in the stomach and small intestines that exhibited peristalsis, a bilobed gallbladder with a small volume of echogenic debris, and few hyperechoic foci within the urinary bladder.

Thoracic radiography revealed a round, soft tissue opacity of 9 X 11 mm in the left caudal lung lobe at the level of the ninth rib (not shown). Superimposed with this nodule were few round gas lucencies. Additionally, there was a soft tissue opacity dorsal to the third and fourth sternebrae. Given the patient’s history and abdominal ultrasonographic findings, differential diagnoses for the pulmonary nodule in the left caudal lung lobe included pulmonary metastasis or a primary pulmonary neoplasm. The increased opacity within the cranial mediastinum was most consistent with mild sternal lymphadenomegaly; differential diagnoses include a reactive process or metastatic spread of neoplasia. An incidental radiographic finding of thoracic spondylosis deformans was noted.

Fine-needle aspirates of the eccentric jejunal mass and enlarged jejunal lymph nodes were performed at the time of ultrasonography. Microscopic evaluation of the mass indicated probable lymphoma or possible atypical lymphoid hyperplasia. Additional diagnostics were required to confirm the diagnosis. On the basis of these results, in combination with the patient’s history and abdominal ultrasonographic findings, an exploratory laparotomy was performed. The jejunal mass was removed via resection and anastomosis. The portion resected included 5 to 8 cm of intestine on either side not associated with the mass lesion. Additionally, a jejunal lymph node, colonic lymph node, and the liver were biopsied. Pertinent surgical findings included multiple omental adhesions along the duodenum and jejunum, a focal area of thickening of the mid jejunum where the eccentric mass was located, and generalized lymphadenopathy most prominent in the jejunal, ileocolic, and colic lymph nodes. The histopathologic evaluation of the focal jejunal mass described transmural thickening of the wall with dense sheets of small lymphocytes most consistent with small-cell lymphoma. These findings extended to the edges of the sampled portion of intestine indicating diffuse small-cell lymphoma. The jejunal and colic lymph nodes were suggestive of reactive hyperplasia, and the liver histopathology was consistent with mild biliary hyperplasia and centrilobular hepatocellular vacuolation.

After surgery, the patient recovered well and was referred to the oncology service and was treated with chlorambucil (0.47 mg/kg, PO, q 12 h) and prednisolone (1.1 mg/kg, PO, q 12 h). Chlorambucil was discontinued shortly after starting treatment due to suspected progressive disease and continued weight loss. The treatment plan was adjusted to an 8-dose course of lomustine (2.16 mg/kg, PO, q 3 weeks) and prednisolone (1.1 mg/kg, PO, q 24 h). The frequency of lomustine administration was extended to every 4 weeks after the fourth dose due to neutropenia (0.77 X 103 cells/µL; reference range, 1.48 X 103 to 10.29 X 103 cells/µL). Then, the dosing interval was further increased to every 6 weeks after the fifth dose due to thrombocytopenia (51 × 103 thrombocytes/µL; reference range, 151 X 103 to 600 X 103 thrombocytes/µL), with the neutrophil count at this time being within reference limits. The patient tolerated the adjusted treatment with the only adverse effect being chronic diarrhea managed on a strict gastrointestinal supportive diet and tylosin (12.3 mg/kg, PO, q 12 to 24 hours). After the 8-dose course of lomustine chemotherapy treatment, the patient was maintained on prednisolone (1.1 mg/kg, PO, q 24 h for 1 year, then extended to q 48 h) and tylosin, at the previously listed dose, until the patient was lost to follow-up around day 1,065 after chemotherapy.

On histopathology, the mid jejunal mass was interpreted as small-cell lymphoma. The ultrasonographic characteristics of small-cell lymphoma or inflammatory bowel disease include diffuse muscularis propria wall layer thickening affecting multiple small intestinal segments throughout the gastrointestinal tract with altered wall layering.1 This is in contrast to the current case, which showed only a solitary mass lesion with normal wall layering of adjacent small intestinal segments. In cats, an eccentric mass or masses that arise from the small intestinal wall causing indistinct to loss of wall layering is typically seen with large-cell lymphoma, mast cell neoplasia, or carcinoma.2–4 Solitary mass lesions caused by low-grade small-cell lymphoma have not been commonly reported prior to this case, which led to the initial ultrasonographic diagnosis of a high-grade malignant process. The mass lesion in this case was echogenic, which is not typically seen with a high-grade malignant process. Ultimately, tissue sampling remained the key for differentiating the ultrasonographically identified lesions. Distinction of tumor type is important for determining the ideal protocol for oncological treatment, for anticipating how aggressive the neoplasm may act, and for predicting prognosis.

The samples from the enlarged jejunal and colic lymph nodes indicated increased numbers of mature lymphocytes and other features that represent either reactive hyperplasia or early small-cell lymphoma. The enlarged sternal lymph node in the thorax and the mass in the caudal left lung lobe, identified on thoracic radiographs, were not sampled and therefore the distinction between primary pulmonary neoplasia and metastatic disease was not confirmed. These 2 abnormalities remained static in size and radiographic appearance without evidence of additional lesions. In regard to the cat’s initial critically elevated cobalamin, previous notions indicated that elevated cobalamin was an insignificant finding; however, more recently it has been suggested that an elevation may be associated with hepatic or neoplastic disease in cats.5 The patient responded to treatment with an 8-dose course of lomustine and the glucocorticoid prednisolone as previously outlined. No relapse of disease was identified within the follow-up time period until the cat was lost to follow-up, due to moving to a new state, around 1,065 days.