Transverse plane T2-weighted (A), T2-weighted FLAIR (B), T1-weighted precontrast (D), and T1-weighted postcontrast (E) and dorsal plane diffusion-weighted image (C) and apparent diffusion coefficient map image (F) from MRI of the brain of a 10-year-old spayed female Labrador Retriever mixed-breed dog with progressive ataxia and diminished vision bilaterally for less than 3 hours’ duration. In each image, the patient’s right side is toward the left of the image. The transverse images (A, B, D, and E) were obtained at the level of the frontal lobes, with dorsal toward the top of the images. In the dorsal images (C, F), rostral is toward the top of the images.

Same images as in Figure 1. In the right frontal lobe, there is a fairly well-defined, rounded, intra-axial lesion (arrows) that is hyperintense on the diffusion-weighted image (C) and hypointense on the apparent diffusion coefficient map (F). The lesion is not detectable on the other sequences. 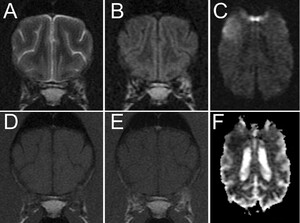 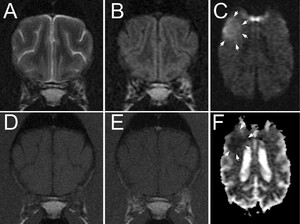 A 10-year-old spayed female Labrador Retriever mixed-breed dog was presented for hyperacute, progressive ataxia and diminished vision bilaterally for less than 3 hours’ duration. The dog had a similar event 2 months prior, but the clinical signs resolved spontaneously and rapidly without treatment. Besides chronically mildly elevated alkaline phosphatase, the dog had no other comorbidities.

Multiplanar (sagittal, transverse, and dorsal) MR images of the brain were obtained. No obvious signal abnormalities were identified on T2-weighted, T2-weighted FLAIR, T2*-weighted gradient recall echo, or T1-weighted pre- or postcontrast series, diffusion-weighted images (DWIs) showed a fairly well-defined, round, hyperintense, intra-axial lesion in the dorsal aspect of the right frontal lobe, and the corresponding area had hypointense signal on apparent diffusion coefficient (ADC) map images (Figure 2). The intra-axial right frontal lobe lesion was most consistent with hyperacute, nonhemorrhagic, ischemic cerebrovascular disease. Although other differential diagnoses, such as infectious or noninfectious encephalitis and neoplasia, could not be entirely excluded, they were considered to be less likely.

The dog recovered well from anesthesia after the MRI. The dog was discharged the same day and treated as an outpatient with supportive care. No medications were prescribed. The dog was lost to follow-up.

In veterinary and human medicine, diagnosis of ischemic cerebrovascular disease (eg, ischemic stroke, nonhemorrhagic ischemic infarct) has increased in frequency following the introduction of MRI. With conventional MRI sequences, ischemic strokes are generally hyperintense on T2-weighted and T2-weighted FLAIR sequences and hypointense on T1-weighted sequences with little to no contrast enhancement.1–3 There is often little to no mass effect attributable to parenchymal swelling. A chronic or prior ischemic stroke will generally have decreased volume due to parenchymal loss. Ischemic strokes are typically solitary and can be classified as lacunar infarcts or territorial infarcts. Lacunar infarcts involve smaller, deep vasculature within the brain. Territorial infarcts involve larger arteries; as a result, larger areas of the brain parenchyma will be affected and the resultant lesion will generally have well-defined margins confined to the vascular territory of the affected vessel.1,3 Potential differential diagnoses for these MRI findings may include postictal changes, inflammatory disorders, prior trauma, or glioma; however, the imaging findings and the patient’s clinical history may allow for differentiation of these diagnoses from an ischemic lesion.2,3 For the dog of the present report, there were no detectable signal abnormalities on the conventional MRI sequences due to how rapidly MRI was performed following the onset of clinical signs; however, the ischemic lesion was clearly detected on DWI and ADC map images, which facilitated the diagnosis. These imaging characteristics are associated with how the pathophysiology of ischemic strokes develops over time.

Ischemic strokes can be aged based on the time from the initial incident as early hyperacute (0 to 6 hours), late hyperacute (6 to 24 hours), acute (24 hours), subacute (1 to 3 weeks), and chronic (over 3 weeks).4 In the hyperacute stage, cerebral ischemia impairs regional perfusion and results in energy deprivation of the affected region.1 This leads to failure of sodium-potassium ATP pumps and consequently the accumulation of intracellular sodium and calcium ions. The changes of ionic gradients trigger extracellular water flow into the cells, which leads to cell swelling and causes cytotoxic edema.1,5 Cytotoxic edema develops within minutes after an ischemic event and involves only a small amount of water shifting between the extracellular and intracellular compartments.1–3 After 4 to 6 hours of hypoperfusion, vasogenic edema begins to develop due to the disruption of the blood brain barrier and subsequently results in parenchymal swelling.1,5

Conventional MRI sequences (T2-weighted, T2-weighted FLAIR, and T1-weighted before and after gadolinium administration) produce images based on tissue water content and are generally sensitive to pathological changes in the brain. In the early hyperacute stage of ischemic stroke, however, there are minimal to no detectable signal changes in these conventional sequences.3–5 Diffusion-weighted MRI sequences can be used to diagnose ischemic lesions earlier than conventional sequences.2,4 DWI and ADC maps create images based on the random Brownian motion of water in tissue and are most commonly used in the diagnosis of ischemic cerebrovascular disease.2,3,6 In normal tissues there is no restriction to water movement, and water molecules freely move in and out of the cells.3 When cytotoxic edema occurs, there is increased intracellular water and reduced diffusion of water across cell membranes. Within minutes of an ischemic insult, DWI can detect the restricted water diffusion associated with cytotoxic edema and the edema can be measured quantitatively with ADC maps.5 Ischemic lesions exhibit increased signal (hyperintense appearance) on DWI with reduced ADC values (hypointense appearance).1,3–5 Comparatively, conventional MRI sequences are less sensitive to acute water diffusion patterns at the cellular level. In humans DWI signal changes can be seen from 30 minutes to 5 days after initial injury.7 DWIs have high sensitivity (88% to 100%) and specificity (95% to 100%) for acute ischemic strokes in humans and may assist with determining the time of onset.5

After an ischemic stroke, following the development of cytotoxic edema, tissue osmolality increases and precedes the vasogenic edema. In the late hyperacute stage, there is increased tissue water content and the development of vasogenic edema, which causes swelling of the gray and white matter. This increased tissue water content can be detected on conventional MRI sequences hours after the onset of an ischemic brain infarct and appears hypointense on T1-weighted and hyperintense on T2-weighted and T2-weighted FLAIR sequences. Contrast enhancement of an ischemic stroke is associated with reperfusion and develops over days (more commonly 1 to 8 weeks) after the clinical onset.2–4

The dog of the present report was examined less than 3 hours after onset of clinical signs, and MRI was performed within 1 hour of presentation. There were no detectable signal abnormalities on the conventional MRI sequences, presumably due to the MRI being performed prior to the development of substantial vasogenic edema. The diffusion-weighted sequences were integral for the MRI diagnosis of an ischemic infarct in this patient; the lesion characteristics, including hyperintensity on the DWI and hypointensity on the ADC map, were characteristic of reduced cellular diffusion of water due to cytotoxic edema from an ischemic event.2–4 Without DWI and ADC map images for this patient, potential differential diagnoses for the presenting clinical signs with no appreciable signal abnormalities on conventional MRI sequences would include occult cerebrovascular accidents (such as an occult ischemic infarct or transient ischemic attacks), occult infectious or inflammatory etiologies, toxicosis, metabolic derangements, or occult neoplasia.3 In human medicine, early detection of ischemic stroke improves clinical outcomes. Treatment with tissue plasminogen activator has been shown to be the standard care for human patients, although it needs to be administered within 4.5 hours of the onset of symptoms and should not be used when patients have or are predisposed to hemorrhagic strokes.3 Although fibrinolytic treatment has not been demonstrated to be beneficial in acute ischemic cerebrovascular events in dogs and cats,4 use of DWI and ADC map images can lead to faster diagnosis and potentially safer treatment in both human and veterinary stroke patients.