Postcontrast early venous phase transverse plane CT images of the rostral (A) and mid-portion (B) of the nose and at the level of the orbits (C) of a 7-year-old 30.2-kg castrated male Golden Retriever–Poodle cross with epistaxis and an external mass on the right side of the nose. Images are displayed in a soft tissue algorithm (window width, 202 HU; window level, 121 HU) to enhance the vessels. The dog’s right side is toward the left in all images.

Transverse plane CT images of the rostral portion of the nose of the dog described in Figure 1, showing bone lysis (arrows) at the level of the rostral right nasal and maxillary bones and a nidus of vessels (arrowheads) causing a mass effect dorsal to the area of bone lysis. A—Bone algorithm (window width, 2,000 HU; window level, 500 HU). B—Soft tissue algorithm (window width, 350 HU; window level, 40 HU). The dog’s right side is toward the left in all images. 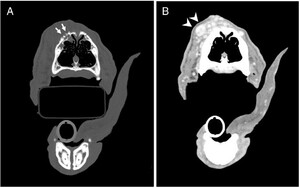 A 7-year-old 30.2-kg castrated male Golden Retriever–Poodle cross was presented for unilateral epistaxis of 1 month’s duration and progressive enlargement of an external mass on the right side of the nose. The dog had a history of trauma to the right side of its face 5 years prior, which had resulted in slight external deformity of the right side of the nose. This area developed a visible mass when the epistaxis started, and the mass progressively increased in size outwardly. A dental procedure with multiple tooth extractions was performed 2 years prior, following a second, unrelated traumatic event.

Physical examination revealed a fluctuant swelling along the right side of the nasal and maxillary bones, softening of the right frontal bone extending toward the medial canthus, right-sided epistaxis, absence of the lower right incisor teeth, and firm subcutaneous masses on the right elbow joint, left shoulder joint, and dorsal aspect of the thorax. Systolic blood pressure (140 mm Hg [measured with a Doppler ultrasonic flow detector]; reference range, 100 to 160 mm Hg) and platelet count (275 X 103 platelets/µL; reference range, 130 X 103 to 370 X 103 platelets/µL) were clinically normal. Cytologic evaluation of a fine-needle aspirate sample of the external mass on the dog’s nose revealed blood.

For CT of the skull, the dog was premedicated with dexmedetomidine (2.98 µg/kg, IM) and hydromorphone (0.08 mg/kg, IM), general anesthesia was induced with propofol (3.7 mg/kg, IV), the dog was intubated, and then general anesthesia was maintained with isoflurane delivered in oxygen. The dog underwent CT (BrightSpeed 16 CT Scanner, GE Healthcare) of the skull before and approximately 40 seconds after administration of iohexol (Omnipaque 300, GE Healthcare; 300 mg I/mL; 596 mg/kg [60 mL total], IV). The CT images were acquired and reconstructed in bone and soft tissue algorithms with a slice thickness of 1.25 mm (Figure 1).

Multiple, tortuous vessels extended from the dorsal nasal vein and anastomosed with each other and regional vasculature, and there was vascular distention and tortuosity of the anastomosing veins on the right side of the skull, including the ophthalmic plexus (Figure 2). The vascular anastomosis (approx 20 X 24 X 55 mm) was focused primarily in the region of the right rostral maxillary and incisive bones, causing an expansile lesion and external nasal deformity. In addition, there were multifocal, circumscribed lytic areas of the right maxillary and incisive bones (Figure 3). Lysis of the maxillary bone was suspected to have been secondary to venous congestion and pressure necrosis, resulting in the observed epistaxis. The vascular anomaly was considered acquired due to the known history of trauma to the nose 5 years prior. A diagnosis of nasal deformity and epistaxis secondary to presumed acquired maxillofacial vascular malformation originating from the dorsal nasal vein was made.

Due to the location and complexity of the vascular malformation, en bloc resection was not a viable treatment option. The dog was discharged with a prescription for Yunnan Baiyao (Yunnan Baiyao Group Co Ltd; 750 mg; 25 mg/kg, PO, q 12 h), and further angiographic evaluation (ie, selective arterial phase CT angiography) to assess the feasibility of interventional treatment (ie, vascular catheter embolization) was recommended. Four months later, the owners reported that the dog was stable and had good quality of life at home and that if direct trauma was avoided, only minimal epistaxis was present. The owners elected not to pursue further angiographic evaluation.

Epistaxis in dogs can result either from systemic causes, such as coagulopathies (eg, thrombocytopenia, thrombocytopathy, or coagulation factor deficiencies) and systemic hypertension, or local disease, with neoplasia, fungal rhinitis, or severe idiopathic rhinitis comprising most cases.1 To the authors’ knowledge, this is the first case report of epistaxis secondary to vascular malformation in a dog.

Vascular malformations are uncommon in dogs and cats, with most reported veterinary cases involving both arterial and venous vasculature (ie, arteriovenous [AV] fistula formation). These more commonly include congenital hepatic and cardiac AV fistulae. Acquired vascular malformations primarily occur in peripheral vascular beds as a sequela to trauma, as was the case for the dog of the present report, and result from both external injuries (eg, cat bites or blunt trauma),2 as well as intravascular damage (eg, IV catheter placement or caustic substance injection).3

Advanced imaging is required for definitive diagnosis of an AV fistula or venous malformation and was key to the diagnosis of acquired maxillofacial vascular malformation in this case. Although conventional radiographic evaluation may detect lytic bone changes and increased opacity, it does not allow differentiation of an intranasal soft tissue neoplastic mass from nonneoplastic conditions and does not allow vasculature assessment. Computed tomography has a described accuracy of 90% to 99% for the diagnosis of nasal disease in dogs.4 The use of various imaging modalities for the diagnosis of vascular malformation has been described in human medicine and veterinary medicine, including contrast-enhanced CT angiography.2,5 For the dog of the present report, 3-D vascular reconstruction of CT images (not shown) allowed for the identification of the specific vascular connections (ie, the dorsal nasal, facial, deep facial, and ventral external ophthalmic veins and the angular vein of the eye). Inclusion of an arterial contrast phase CT would further aid in distinguishing AV fistula formation from a venous malformation.

The CT findings for the dog of the present report demonstrated pathological changes described in humans and veterinary patients secondary to chronic blood flow alterations. Blood flow decreases distal to the AV fistula site, leading to subsequent vascular congestion.6 Chronically increased blood volume and intravascular shear stress result in vascular dilation and structural changes (elongation, tortuosity), which were noted in the anastomosing vessels in our patient. Increased venous pressure can result in edema, commonly manifested in patients with distal limb vascular malformations, and ischemia, as suggested by decreased skin temperature in peripheral AV fistula models.6 In cases where pressure and decreased oxygenation persist, angiogenesis can occur, manifesting as a new vascular plexus in the fistula region (ie, serpentine vessel formation). Both the increased pressure and ischemia, whether pressure-induced or secondary to hypoxia, could have resulted in the maxillary and incisive osteonecrosis observed in the dog of the present report. Identification of specific vasculature, secondary shunting vasculature, and arterial involvement allows patient evaluation for therapeutic options, such as en bloc resection, surgical ligation of arterialized veins,2 or embolization.5 Limitations of other imaging techniques, such as fluoroscopy or ultrasonography, include the inability to evaluate the malformation in 3-D for surgical or interventional correction and the inability to comprehensively evaluate bone structure. Findings on nasal CT of this dog highlight the need for the inclusion of acquired vascular malformation as a differential diagnosis for epistaxis, especially for patients with a history of trauma.