Mediolateral (A) and craniocaudal (B) radiographic images of the right stifle joint of an 8-year-old 44.1-kg castrated male German Shepherd Dog that had undergone tibial plateau leveling osteotomy (TPLO) 4 weeks earlier and that that was being treated for perianal fistulae.

Same images as in Figure 1. Within the mid to proximal tibial medullary cavity, there is increased mineral opacity resulting in decreased conspicuity of trabeculation consistent with sclerosis (asterisks), as well as well-defined, smooth to irregular periosteal formation distal to the TPLO implants (arrowheads). 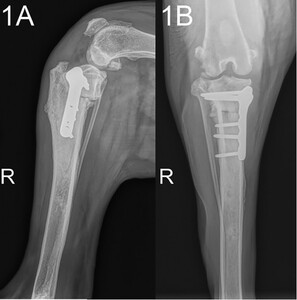 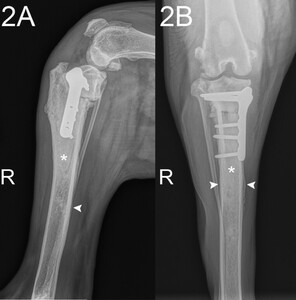 An 8-year-old 44.1-kg castrated male German Shepherd Dog that had undergone tibial plateau leveling osteotomy (TPLO) 4 weeks earlier was presented for a postoperative recheck examination. The TPLO had been performed to address a cranial cruciate ligament rupture in the right stifle joint; no meniscal pathology was noted at the time of surgery, and postoperative radiography confirmed an appropriate osteotomy and implant positioning. Also of note in the dog’s medical history were perianal fistulae, for which it was receiving prednisone (0.23 mg/kg, PO, q 24 h), cyclosporine (2.27 mg/kg, PO, q 24 h), and topical applications of tacrolimus ointment every 12 hours. Preoperative bloodwork was unremarkable. At the recheck examination, the owner reported that the dog had been doing well at home. The dog had a grade 2/5 lameness in the right pelvic limb, as expected 4 weeks following TPLO surgery. The right stifle joint was mildly distended on palpation with mildly reduced flexion on range of motion, but nonpainful. No tibial thrust was present. Repeat radiographs of the right stifle joint and crus were performed (Figure 1).

On the 4-week postoperative radiographs of the right stifle joint (Figure 2), the prior tibial osteotomy remained visible, but at the caudolateral margins of the osteotomy there was moderate, well-defined, irregular periosteal bone formation consistent with callus formation. The surgical implants were in a similar position, with no evidence of peri-implant lysis or implant migration. Additionally, centered within the mid to proximal tibial diaphyseal medullary cavity extending to the margin of the tibial osteotomy, and questionably within the medullary cavity at the distal aspect of the proximal tibial segment, severe increased mineral opacity was present, resulting in the loss of trabecular margins. Along the tibial diaphyseal cortex, at the level of the bone plate and distal to the plate, there was mild to moderate, well-defined, smooth to irregular periosteal bone formation. There remained mild distention of the stifle joint (reduced from prior) and progressive periarticular bone formation (osteophytosis). The soft tissues at the cranial aspect of the stifle joint at the level of the insertion of the patellar tendon were progressively thickened. Gas was no longer present within the soft tissues. Skin staples were no longer present. The right popliteal lymph node was normal in size.

The right tibial medullary findings were consistent with medullary sclerosis. Given the presence of a normal appearing medullary cavity on preoperative and immediate postoperative radiographs, in conjunction with the temporal relationship of this appearance 4 weeks following surgery, a medullary bone infarct was the primary differential diagnosis. Although the patient was on a physiologic dose of corticosteroids, the possibility of this causing a hypercoagulable state predisposing to infarction was considered. The degree of periosteal bone formation was more distally extensive than typical for a healing postoperative TPLO and was suspected secondary to either periostitis associated with the presumed infarct or exuberant callus formation. No cortical or medullary lysis was present to indicate an aggressive lesion. Osteomyelitis was considered unlikely given the clinical absence of hyperthermia and signs of pain. The remainder of the radiographic findings were consistent with a healing 4-week TPLO, patellar tendinopathy, and progressive osteoarthrosis.

Clinically, the dog was doing as expected for a 4-week postoperative recheck examination. Although a bone infarct was the primary differential diagnosis and osteomyelitis was thought unlikely, given the long-term corticosteroid treatment, empirical treatment with clindamycin (10.2 mg/kg, PO, q 12 h) and chloramphenicol (45.4 mg/kg, PO, q 12 h) was initiated and was continued for 4 weeks. No bloodwork was performed at this visit as the dog was clinically doing well and was normothermic on examination. The dog had continued gait improvement and muscle mass increase and remained on the same medications that were given previously for the management of perianal fistulae. Repeat radiography 2 weeks later (6 weeks postoperatively) revealed progressive increased tibial medullary opacity extending further distally within the diaphysis. The prior bony proliferation at the lateral aspect of the osteotomy was similar. Twelve-week postoperative radiographs were subsequently performed, in which there was near-complete resolution of the prior tibial diaphyseal medullary sclerosis, with some residual sclerosis in the mid diaphysis. The periosteal bone formation distal to the plate at the diaphysis was reduced in size and more smoothly marginated. There was otherwise complete bridging of the osteotomy site, with a reduction in size and smoother margination of the osteotomy callous. The soft tissues at the level of the patellar tendon were reduced in size. There remained mild to moderate stifle joint distention and similar osteoarthrosis. No implant associated lysis or migration was identified. The dog was returned to the clinic at a later date for a surgical site infection of a prior left TPLO. Radiographs obtained at this visit of the right tibia (just over 2 years postoperatively from the right TPLO) showed normal medullary cavity density and resolution of the medullary sclerosis. The resolution of the radiographic findings in this case is presumed to be due to natural resolution of infarction over time; however, osteomyelitis responsive to antimicrobial treatment cannot be entirely ruled out.

Medullary bone infarction (MBI) is a rarely reported phenomenon in the veterinary literature. A single case report of an MBI has been described secondary to a TPLO.1 In humans MBIs are a well-recognized complication of total hip joint replacement.2

Diagnosis of MBI typically begins with plain radiography, with lesions exhibiting a characteristic sclerotic appearance of the medullary cavity. Several other differential diagnoses exist for medullary sclerosis on radiographs, including panosteitis; bacterial, fungal, or protozoal osteomyelitis; osteopetrosis; vitamin D toxicosis; or myelofibrosis.3 Neoplasia can result in medullary sclerosis, but this is typically in combination with lysis. However, given that this patient was presented for routine postoperative follow-up and no abnormal orthopedic examination findings were noted, these differential diagnoses were considered unlikely. In conjunction with the recent surgical intervention and absence of systemic signs to support infection, MBI was most likely.

In a study looking at MBIs in humans,4 8 patients were presented with knee pain having clinical signs ranging in duration from 4 days to approximately 1 month. All patients had plain radiographs performed that demonstrated subtle, mottled, ill-defined radiolucencies in the diaphyseal or metaphyseal region of the tibia. In each case, malignancy or infection was suspected based on clinical signs and radiographic appearance. To rule out malignancy, all patients underwent additional testing including CT, MRI, and/or bone biopsy. All results were consistent with bone infarction. The radiographic findings in these human patients differed from those in the canine case described given the lack of lysis seen in the dog’s radiographs. No additional testing was performed on the dog in the case described here, though histopathology would have allowed for a definitive diagnosis. A previous study5 detailing femoral medullary bone infarctions following total hip joint arthroplasty documented similar radiographic findings to those reported here, and none of the affected dogs in that study had reported clinical signs attributable to infarction. Interestingly, in this study, none of the infarcts were noted to resolve within the study period despite an average follow-up time of 67 months after surgery.5

MBI of the tibia is a rare finding associated with orthopedic surgery in veterinary medicine. However, it should be on the differential list when radiographic signs such as medullary sclerosis, periosteal bone formation, loss of trabecular detail, or irregular, serpiginous lines in the medullary canal5 are noted during postoperative follow-up radiographic examination. Although the patient’s long-term corticosteroid treatment was administered at a physiologic dose, it is possible this may have predisposed to a hypercoagulable state and the MBI.6,7 As with infarcts in other locations, a sudden onset with gradual resolution of clinical signs would be expected. In this patient, the lameness noted at the 4- and 6-week follow-up visits may have been, in part, due to the suspected infarction; however, the dog’s lameness was not any more severe than expected during routine TPLO follow-up, which may have obscured the detection of the inflammatory phase of infarction. In contrast to the previously reported TPLO-associated MBI, there was no sign of pain noted on tibial palpation in this case.

Distinguishing alternative causes of lameness from normal postoperative stifle joint discomfort following a TPLO can be challenging and require adjunct diagnostic procedures, including arthrocentesis (with or without fluid analysis, cytology, bacterial culture, and susceptibility testing) to rule out inflammatory or infectious arthropathies, arthroscopy to rule out meniscal or other soft tissue injury, and diagnostic musculoskeletal ultrasonography. Specifically for patients with suspected MBI, advanced diagnostic procedures, such as CT, MRI, bone biopsy, or culture, are useful for ruling out other differential diagnoses. However, serial postoperative radiography is an effective means to monitor healing and implant status, as well as for diagnosis and recheck examination of MBI as in this patient.