Postcontrast dorsal (A) and transverse (B) plane CT images of the skull and cervical region of an 8-year-old castrated male Labrador Retriever mix-breed dog evaluated because of progressive enlargement of subcutaneous cervical mass on the right side. The images are displayed in a soft tissue window (window width, 320 HU; window level, 30 HU) with a 2-mm slice thickness. The dog’s right side is toward the left in both images.

Postcontrast dorsal (A) and transverse (B) plane CT images of the skull and cervical region of an 8-year-old castrated male Labrador Retriever mix-breed dog evaluated because of progressive enlargement of subcutaneous cervical mass on the right side. The images are displayed in a soft tissue window (window width, 320 HU; window level, 30 HU) with a 2-mm slice thickness. The dog’s right side is toward the left in both images.

Same images as in Figure 1. There is a fat-attenuating, non–contrast-enhancing mass (arrows) with a heterogeneously attenuating region (asterisks).

Same images as in Figure 1. There is a fat-attenuating, non–contrast-enhancing mass (arrows) with a heterogeneously attenuating region (asterisks). 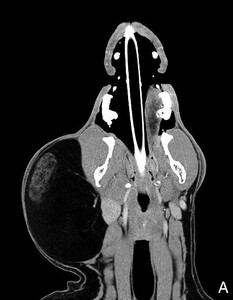 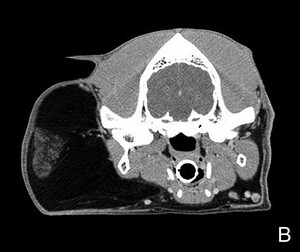 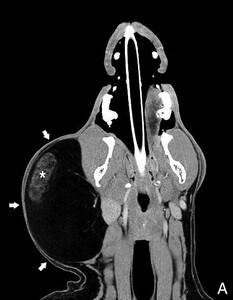 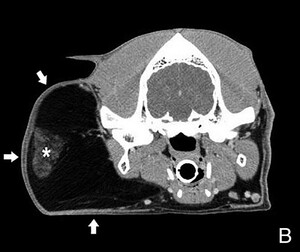 An 8-year-old 35.6-kg castrated male Labrador Retriever mix-breed dog was referred for evaluation of progressive enlargement of a unilateral (right-sided) subcutaneous cervical mass that the owners first noted 12 months earlier. A fine-needle aspirate performed by the initial referring veterinarian yielded a small amount of fluid, and cytologic results were inconclusive. The patient was referred to a second veterinarian due to a rapid increase in size of the mass after the initial aspirate. A second aspirate was performed and yielded blood and lipid droplets. The patient was then referred to the surgical service for advanced imaging and treatment recommendations.

On initial referral examination, the patient seemed nervous but alert. The dog’s rectal temperature was 39.7 °C (reference range, 38.0 to 39.2 °C), and other vital signs were within reference limits. The dog had a large (20-cm-diameter), soft, subcutaneous mass extending from the right submandibular region to the right cranial cervical region. Palpation of the mass did not elicit signs of pain. The remaining findings from physical examination were unremarkable. The owners reported that the patient had recently developed diarrhea and seemed stressed at home but attributed both to the owners being in the process of a move.

The dog was sedated for an oropharyngeal examination; there was no visible mass protruding into the oropharyngeal region or affecting laryngeal function. Results of preoperative CBC and serum biochemical analysis were within reference limits. The patient underwent general anesthesia for a CT study of the head and neck. Pre- and postcontrast images were obtained in transverse orientation from the level of the nasal planum to the caudal aspect of C4. Multiplanar images were reviewed at 2-mm slice thickness in bone, soft tissue, and brain windows (Figure 1).

On CT there was a smoothly marginated, partially encapsulated, primarily fat-attenuating, and non–contrast-enhancing mass (10.6-cm-wide X 9.6-cm-high X 13.6-cm-long) in the ventrolateral subcutaneous tissues, spanning from the level of the caudal angle of the mandible caudally to C3 and containing several fat lobules separated by thin, soft tissue planes (Figure 2). Within the dorsolateral aspect of the mass, there was a well-defined, heterogeneously attenuating region (2.8-cm-wide X 4.8-cm-high X 6.8-cm-long). The right maxillary vein was compressed and medially displaced by the mass but not invaded. The right maxillary vein then extended through the mass more dorsally along with the caudal auricular vein. Although portions of the mass had a clearly defined capsule, there were some regions where a capsule was not clearly visible and the mass partially surrounded or was intimately associated with pertinent regional structures (ie, mandibular salivary gland, base of ear). The regional lymph nodes were of normal size and shape. The remaining findings on CT were unremarkable.

Based on the CT imaging and cytology, the fat-attenuating mass was considered most consistent with a benign lipoma with a likely necrotic region of thick cellulitis or scarring. A liposarcoma was also considered.

Given the apparent encapsulated nature of the mass and primary differential being benign lipoma, surgical excision was performed. Surgical excision consisted of sharp dissection through superficial subcutaneous tissues followed by blunt dissection from the underlying musculature. At the deep extent of the dissection, the mass was adhered to the base of the ear canal and deeper musculature. The mandibular salivary gland was visualized and preserved. A small amount of gross disease was left within the surgical field due to a high degree of adherence to the regional vasculature (right maxillary and caudal auricular vein). The defect was closed routinely, and the mass was submitted for histopathology.

The final histopathology report indicated that most of the mass consisted of predominately serous salivary tissue that was separated by large numbers of terminally differentiated adipocytes. The mass had a slender to thick fibrous capsule. In one of the sections, fibrous septa between the lobules of adipocytes contained perivascular lymphoplasmacytic inflammation. The mass was interpreted to be a sialolipoma of the canine salivary gland. Given the regional anatomy, the parotid salivary gland was considered to be the origin of the lesion.

The patient was evaluated 2 weeks postoperatively for suture removal. A seroma was present at the surgery site. Otherwise, the incision had healed without complication and there was no palpable evidence of mass recurrence. No additional follow-up was performed.

Mass-like lesions within the cervical region of the dog are relatively common with most sources consisting of lymphadenopathy, salivary gland mucoceles, abscess formation, or neoplastic lesions. Identification of individual regional anatomy via radiography of this region is often difficult to interpret. Computed tomography is useful in determining the potential tissue source and pertinent neurovascular involvement, both of which are important in preoperative surgical planning. Blind fine-needle aspirate sampling can yield error when attempting to determine tissue source; hence, ultrasound-guided aspirate collection may have yielded more preoperative information regarding type of tumor.

The overall incidence of salivary tumors in dogs is infrequent and reported to be 0.17%.1 Furthermore, fat-containing salivary gland tumors are rare benign tumors that, to our knowledge, have only been reported in 15 dogs, for which salivary lipomatosis of the salivary gland was the most common (11 of 15 cases), followed by sialolipomas (3 of 15 cases) and angiolipoma (1 of 15 cases).2

In conclusion, although a rare finding, sialolipoma should be considered as a differential diagnosis in dogs for which cytologic and CT findings suggest an adipocyte-containing tumor in the region of the salivary glands. With the advent and relative decrease in cost of CT, it is gradually becoming more practical to perform region imaging and, therefore, increase the amount of information being obtained preoperatively.