Transverse abdominal ultrasonographic image obtained at the level of the pancreas of a 13-year-old 4.9-kg male castrated Egyptian Mau cat evaluated because of a 2-month history of inappetence, weight loss, persistent diarrhea, and lethargy. The cat’s right side is toward the left of the image.

Same image as in Figure 1. In the region of the pancreas and adjacent to the duodenum (arrow), there are large cystic structures (arrowheads) that are anechoic to hypoechoic and have thin walls and distal acoustic enhancement.

Venous phase dorsal plane maximal intensity projection CT angiographic image of the abdomen of the cat described in Figure 1. The pancreas is expanded by and associated with multiple large fluid-attenuating and soft tissue–attenuating structures (arrowheads) that occupy most of the cranial and left mid to caudal regions of the abdomen, extending from the caudal aspect of the liver to the level of L6. The cat’s head and right side are toward the top and left side of the image, respectively. BP = Body of the pancreas. DD = Descending duodenum. F = Fluid-attenuating region of the abdominal mass. LK = Left kidney. RK = Right kidney. S = Soft tissue–attenuating region of the abdominal mass. 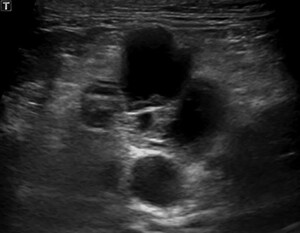 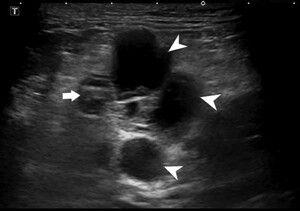 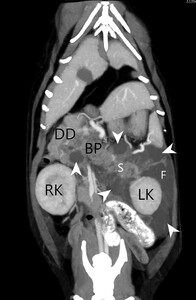 On presentation, the cat was bright, alert, and responsive but had a body condition score of 3/9 with substantial cachexia and moderate atrophy of all major muscle groups. Other abnormal findings on physical examination included a tense abdomen and a large, palpable, irregularly contoured mass that filled most of the abdominal cavity. This mass was not definitively attributable to any specific organ.

Abdominal ultrasonographic examination revealed a heterogeneous, poorly marginated mass in the region of the pancreas with multiple variable-sized, anechoic to hypoechoic, thinly walled, complex cystic structures (Figure 2). The entirety of the pancreas was effaced by the mass, which extended to the caudal third of the abdomen and displaced intestines to the right. Some of the cystic structures contained a mild to moderate amount of echogenic debris and showed evidence of partial to complete septation. No internal vascularity of the cystic mass was noted on color flow Doppler interrogation (not shown), and no abdominal lymphadenopathy was evident.

The cat underwent general anesthesia for abdominal CT with an angiography, which revealed the pancreas to have been expanded by and associated with multiple large fluid-attenuating and soft tissue–attenuating structures with thin septation and rims of contrast enhancement (Figure 3). The cystic mass extended from the caudal aspect of the liver to the level of L6, filled most of the cranial portion and left mid to caudal portions of abdomen, and surrounded the cranial mesenteric and portal veins. Differential diagnoses included pancreatic pseudocysts, true cysts, polycystic pancreatic disease, and neoplasia, such as cystadenocarcinoma.

Cytology of an ultrasound-guided fine-needle aspirate sample of the cystic mass revealed cystic fluid, moderate histiocytic inflammation, exocrine pancreatic tissue, and evidence of chronic hemorrhage. Exploratory laparotomy was elected to obtain biopsy samples for histopathology and revealed a large cystic mass (approx 15 X 17 X 10 cm) along with a newly formed brown layer of tissue covering the peritoneal surface, omentum, and spleen. Biopsy samples of the liver and omentum were obtained, and histologic examination revealed mild lymphoplasmacytic hepatitis and multinodular histiocytic omentitis with intrahistiocytic pigment granulomas, respectively. Because the cystic mass was friable and closely associated with the portal vein and descending duodenum, it was deemed not amenable to complete resection; however, a biopsy sample (approx 1 X 1 X 1 cm) was obtained.

Histopathologic diagnosis of the mass was pancreatic acinar cell cystadenoma. Because resection was not a viable option, ongoing patient monitoring every 3 months with abdominal ultrasonography and bloodwork was recommended. Three months later, the patient was returned with abdominal effusion and suspected cyst rupture. Although the cat’s clinical signs improved markedly upon drainage of the abdominal fluid and provision of supportive care, with no options for curative treatment and a high chance of repeated cyst rupture, the owners elected euthanasia for the cat.

Pancreatic acinar cell cystadenoma is a rare and poorly described tumor.2 To the author’s knowledge, the present report was only the second case reported in cats. Other differential diagnoses for cystic lesions of the pancreas in cats include true cysts (either congenital or acquired retention cysts), pseudocysts, polycystic pancreatic disease, ductal and acinar adenoma, and cystadenocarcinoma.3 Due to prognostic implications, differentiating between cystic pancreatic lesions is of high importance. Pancreatic adenocarcinoma is an aggressive tumor with a high metastatic rate and poor prognosis in cats, having a mean survival time of 6 to 7 days without treatment and 165 days with surgical excision and chemotherapy.4 The prognosis of acinar cell cystadenoma in cats is unclear as there are no reports of long-term follow-up, but all cases reported in humans have been benign.5,6 The treatment of choice for large cystadenomas is complete excision, if possible.6

Imaging modalities must be combined with cytology and histopathology to accurately distinguish benign and malignant cystic pancreatic lesions and to recommend appropriate treatment or palliative options. Ultrasonographic and CT examinations were crucial in the initial diagnostic steps and decision to move forward with an exploratory laparotomy for the cat of the present report. The modalities provided information on the tumor’s location, size, infiltration, metastasis, and relationship to peripheral tissues.

Ultrasonography alone can prove difficult to determine the organ of origin for extensive abdominal masses. For the cat of the present case, a mass originating from the liver could not be ruled out with ultrasonography due to the possibility of an eccentric pedunculated mass, the pedicle of which may have been missed. Computed tomography was especially useful in determining the organ of origin and the extent of the cystic lesions, which aided in surgical planning.