Same images as in Figure 1, plus an inset close-up of the mediolateral view of the fractures of the left tibia and fibula and an inset of the craniocaudal view of the proximal aspects of the right tibia and fibula. Transverse fractures (white arrows) of the left tibia and fibula are evident. The tibial fracture is non-displaced and has cranial margins that are bordered by pronounced sclerosis, display “beaking” of bone production cranially, and are rounded and blunted (white circle), whereas the caudal portion of the fracture has sharp margins (black arrow). The right tibia has an increased opacity and markedly thickened cortex at the level of the tibial tuberosity (black circle). Additionally, there is bilaterally symmetric thickening of the femoral cortices, hyperostosis of the ilial bodies, and closure of the fibular medulla, consistent with diffuse regional sclerosis.

Mediolateral and craniocaudal radiographic images of the right (R; A and B, respectively) and left (C and D, respectively) tibias of the same cat 4 days after the images in Figure 1 were obtained. There are bilateral fractures through the tibias (white arrowheads) and fibulas and generalized cortical thickening most pronounced in the cranial cortex (double-headed arrows). 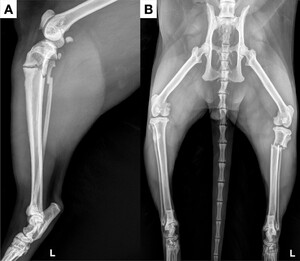 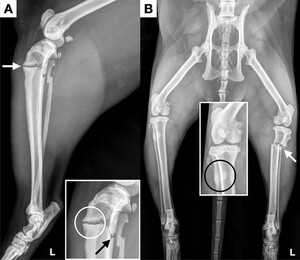 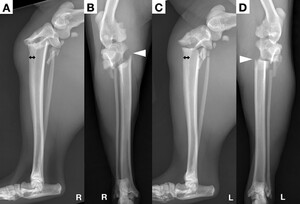 An 11-year-old 5.6-kg castrated male domestic longhair cat was referred for orthopedic surgical evaluation for the repair of a left tibial fracture noticed 4 days prior to presentation. The owner reported that the cat had begun limping on the left hind limb in the evening and that a fracture had been diagnosed by the primary care veterinarian the following morning; there was no known trauma. Additionally, the patient had been diagnosed with idiopathic epilepsy and idiopathic hypercalcemia 6 years prior and since then had been treated with phenobarbital (7.5 mg, PO, q 12 h), levetiracetam (32.5 mg, PO, q 8 h), alendronate (15 mg, PO, q 7 days), and diazepam (0.25 to 2 mg/kg, PO, as needed for seizures). The patient had also received gabapentin (50 mg, PO, q 12 h) following diagnosis of the tibial fracture.

Transverse fractures of the left tibia and fibula were evident and at basically the same proximal level (Figure 2). Fracture lines were rounded cranially but sharp caudally, suggestive of both a long-term process and a sudden event, respectively. Moderate circumferential cortical thickening was evident in all imaged long bones, accentuated along the cranioproximal aspect of the left tibia, consistent with hyperostosis. The right tibia had an increased opacity and markedly thickened cortex at the level of the tibial tuberosity.

Bilateral hind limb radiography was repeated on the day of referral examination to aid in surgical planning and investigate the area of increased cortical opacity on the right tibia. These images revealed a nearly identical fracture and markedly thickened cortices on the right tibia (Figure 3). Evidence for a chronic process was the rounding of the tibial fracture margins along with sclerotic bone adjacent to each of the tibial fractures bilaterally. Interestingly, although the fibular fractures had sharp margins, indicative of a more sudden process, regional sclerosis and loss of the medullary canal at the level of the fracture indicated a chronic component. These findings suggested that the patient had insufficiency fractures of both tibias. When the left tibia completely fractured, it likely led to greater stress on the fibula causing the acute left fibular fracture. The right hind limb was consequently overloaded as the patient limped on the left, and we suspected that overload accelerated the completion of the right tibial fracture and the acute right fibular fracture.

Given the patient’s history of alendronate and antiepileptic drug administration for the past 6 years combined with clinical and radiographic findings, drug-induced hyperostosis leading to bilateral acute-on-chronic tibial fractures was suspected. The prognosis for repair of both tibial fractures with hyperostosis was guarded. The client elected euthanasia but not necropsy.

Bisphosphonates, such as alendronate, have been used for the treatment of idiopathic hypercalcemia in cats. These medications induce osteoclast apoptosis to decrease osteolysis and diminish the release of calcium from bone. Unfortunately, these changes can result in impaired bone modeling and remodeling leading to skeletal fragility.1 Previous research on bisphosphonates has documented an increase in cumulative bone microfracture secondary to hypertrophy of bone, classified in people as acquired osteoporosis.2 Adverse effects of bisphosphonate administration > 3 years has not been reported in cats; however, osteonecrosis of the jaw has been seen in Beagles treated long-term with a bisphosphonate.3 Similarly, in humans, long-term bisphosphonate usage has been associated with osteonecrosis of the mandible and hypertrophy of cortical bone.4

Bone fracture secondary to acquired osteopetrosis in humans frequently occurs in the subtrochanteric region of the femur where the superficial gluteal muscle attaches and exerts strong contractile forces.1 These are frequently classified as atypical femoral fractures.4 In the cat of the present report, the fractures also occurred in a region where a large muscle group attached (the patellar tendon to the tibia) and exerted strong muscular contractile forces from the quadriceps. In humans, radiographic features of these fractures secondary to acquired osteopetrosis include a transverse fracture pattern, localized periosteal thickening of the lateral cortex, generalized thickening of the femoral cortices, and a longer cortical fragment on the medial aspect considered a medial cortical spike.5 Similar features were seen in both left and right tibial fractures of our patient. Hypertrophy of bone, or hyperostosis, reduces the energy absorption ability of bone during impact or loading, increasing the risk of fracture. In addition to bisphosphonate usage suspected to be a major contributor to hyperostosis, both phenobarbital and levetiracetam are well documented in people to alter bone metabolism.

To our knowledge, this was the first reported case of a fracture suspected to have been secondary to drug-induced hyperostosis. Unfortunately, tissue was unable to be obtained to confirm this finding. However, in comparing the radiographic images obtained before and during referral examination, thickening of the cortex was evident in the proximal metaphyseal region of the right tibia in both sets of images. We suspected that this thickening was due to chronic microfractures in that region, and findings appear consistent with similar radiographic findings in human patients.2,5