Transverse plane T1-weighted (T1W) precontrast (A) and postcontrast (B), T2-weighted (T2W; C), and FLAIR (D) MRI images of the brain at the level of the temporomandibular joints in a 7-month-old 18-kg sexually intact male Staffordshire Bull Terrier with left thoracic limb lameness, episodes of thoracolumbar kyphosis, and pelvic limb ataxia. In all images, the dog’s right side is toward the left.

Same images as in Figure 1. The gray matter is diffusely swollen, with diffuse flattening of the sulci (arrows). The volume of the CSF signal in the sulci is less than expected on T2W. Within the gray matter, such as prominently visible in the thalamus (asterisks), there are bilaterally symmetric, diffuse regions that have hyperintense signal on T2W and FLAIR images, mildly hypointense signal on T1W images, and no evidence of contrast enhancement. The white-gray matter interface (arrowheads) is markedly pronounced.

Transverse plane T1W precontrast (A) and postcontrast (B), T2W (C), and FLAIR (D) MRI images of the brain at the level of the temporomandibular joints in a 3-year-old 15-kg male dog showing no abnormalities in the volume of the gray matter, shape and depth of sulci (arrows), signal intensity of the gray matter (eg, the thalamus [asterisks]), or white-gray matter interface (arrowheads), compared with the abnormal findings for the dog described in Figure 1. 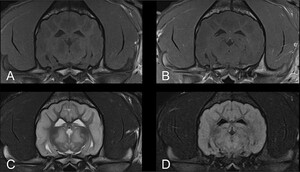 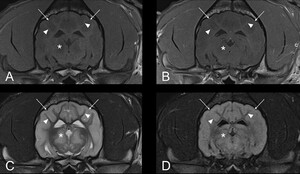 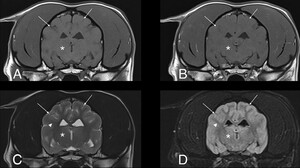 A 7-month-old 18-kg sexually intact male Staffordshire Bull Terrier was referred to the Neurology Service for investigation of left thoracic limb lameness, episodes of thoracolumbar kyphosis, and pelvic limb ataxia. The onset of clinical signs was reported as 10 weeks prior to referral. The episodes of kyphosis and gait abnormalities appeared to follow increased activity or excitement. During these episodes, the patient was perceived to be painful.

Findings on general physical examination were unremarkable. Neurologic examination revealed mild thoracolumbar kyphosis and mild proprioceptive ataxia of the pelvic limbs. The remaining findings on neurologic examination were within reference limits. Neuroanatomical localization was consistent with an abnormality of the forebrain, C6-T2 spinal cord segments, or both and potential abnormalities of the peripheral nerves or muscles. Results of a CBC and serum biochemical analyses were within reference limits.

On MRI, the gray matter of the brain appeared diffusely swollen, with diffuse flattening of the sulci, and the volume of CSF signal in the sulci on T2W images was less than expected (Figure 2). Compared with findings for a young dog with no abnormalities of the brain evident on MRI (Figure 3), our 7-month-old Staffordshire Bull Terrier patient had bilaterally symmetric, diffuse regions of hyperintensity within the gray matter on the T2W images. More prominent areas of bilaterally symmetric hyperintensities were present in the thalamus and dorsal aspect of the brainstem to the level of the cerebellar vermis. The cerebellum also appeared swollen and markedly and diffusely hyperintense with poorly defined arbor vitae on T2W images. These T2W-hyperintense areas were mildly hypointense on T1W images and hyperintense on FLAIR images. There was no evidence of parenchymal signal voids on T2*W GE images and no evidence of contrast medium enhancement. There was mild coning of the cerebellar vermis through the foramen magnum but no evidence of subfalcine or transtentorial herniation. These imaging findings were consistent with metabolic encephalopathy, and L-2-hydroxyglutaric aciduria (L-2-HGA) of Staffordshire Bull Terriers was considered most likely.

Results of CSF analysis were unremarkable; however, results of genetic testing (Staffordshire Bull Terrier KC DNA bundle, Laboklin GmbH & Co) confirmed mutation within the L2HGDH gene and thus L-2-HGA. Treatment was initiated with potassium bromide (110 mg/kg, PO, q 24 h, for 5 days, as a loading dosage, then 37 mg/kg, PO, q 24 h, as a long-term maintenance dosage) because the episodes of thoracolumbar kyphosis and gait abnormality were thought to represent paroxysmal kinesigenic dyskinesia, an episodic movement disorder in which the paroxysms are precipitated by excitement, sudden movement, or startle. The dog was also prescribed dietary supplements of thiamine (100 mg/d), riboflavin (100 mg/d), and L-carnitine (86 mg/kg/d) to support mitochondrial function and for the supplements’ antioxidant properties. Initially, the patient appeared to respond to treatment; however, 2 months following diagnosis, the patient was continuing to have intermittent episodes of ataxia and muscle stiffness.

L-2-HGA is a rare metabolic disease that, to our knowledge, was first described in veterinary literature in a case series1 of 6 Staffordshire Bull terriers with progressive neurologic signs in 2003 and also described later in a West Highland White Terrier.2 The specific etiology of L-2-HGA has not yet been identified in veterinary medicine; however, a broad spectrum of clinical signs (eg, gait dysfunction, abnormal posture, behavioral abnormalities, paroxysmal seizure-like or dyskinetic episodes and tremors most common) has been described, and the reported age at onset of clinical signs ranges from 2.5 to 80 months,3 consistent with findings for the dog of the present report.

The MRI findings in veterinary patients with L-2-HGA are relatively characteristic, with the most commonly described abnormalities including bilaterally symmetric, diffuse regions of gray matter hyperintensity on T2W and FLAIR images, such as seen in the dog of the present report. Areas of most prominent hyperintensities are usually observed in the cerebral cortex, dentate nucleus, basal nuclei, dorsal brainstem, cerebellar nuclei, cerebellar gyri, and as observed in the dog of the present report, the thalamus. The affected parenchyma is mildly hypointense on T1W images.1–3 There is usually no abnormal contrast medium enhancement or mass effect,1–3 but gray matter swelling has been described.2

Correlation between the extent of brain lesions on MRI and clinical signs in humans has not been reliably reported.4,5 Although no correlation has been found between the urinary concentration of L-2-hydroxyglutaric acid and disease severity in dogs, definitive diagnosis of L-2-HGA can be reached through organic and amino acid quantification, because patients with L-2-HGA have an accumulation of L-2-hydroxyglutaric acid in CSF, plasma, and urine.1,6 Additionally, genetic testing, as we performed, is available to identify mutations within the L2HGDH gene, which has been shown to encode L-2 hydroxyglutaric dehydrogenase.7

There is currently no known treatment for L-2-HGA. antiepileptic treatment is recommended if seizure activity is present, and the use of dietary supplements of riboflavin, L-carnitine, and thiamine has been described in human6,8,9 and veterinary1,7 medicine.

The use of MRI in this patient was crucial in reaching the diagnosis. This noninvasive diagnostic method combined with genetic testing allowed accurate diagnosis and quick initiation of supportive medical management.