Same images as in Figure 1, with an orientation toward the direction of the mare's head indicated in each image (blue dot). A—The fetal right eye is centered in the image. The combined orbit diameter (the sum of the distance [dotted line] between the anterior margin of the lens capsule [yellow arrow] and area of the optic disc [green arrow; eye width {purple arrowheads} = 21.9 mm] and the longest distance between the inner margins of the vitreous body [eye length {dotted line connecting the orange arrowheads} = 23.2 mm]) for the right orbit is 45.1 mm (reference range, 38 to 40 mm). B—The dorsal plane fetal biparietal diameter is 97.6 cm (dotted lines connecting the red arrowheads). C—In this oblique view of the cranium, the widest dimension of the skull is 101 mm (dotted line connecting the pink arrowheads).

Picture of the fetus described in Figure 1 showing its severely enlarged and thin-boned cranium (arrow). 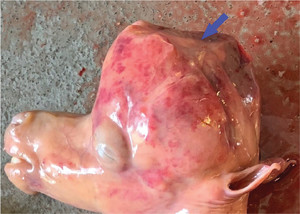 A 7-year-old 570-kg (1,254-lb) multiparous warmblood mare that was an embryo transfer recipient of an embryo recovered from a donor mare 8 days after ovulation was referred for pregnancy assessment monitoring purposes. Pregnancy had been diagnosed with transrectal ultrasonography 14 days after embryo transfer, and no further assessments had been performed since then.

On physical examination, the mare had a body condition score of 6 (on a scale of 1 to 9) and was bright, alert, and responsive. The mare's vital signs were within reference limits, and the duration of gestation at that point was reported to have been 144 days. With the mare restrained in stocks but not sedated, ultrasonographica examination was performed transrectally with an endolinear, transrectal multifrequency transducer (5 to 9 MHz) and transabdominally with a convex multifrequency transducer (2 to 6 MHz; Figure 1; Supplementary Figure S1, available at: avmajournals.avma.org/doi/suppl/10.2460/javma.258.12.1345).

What key abnormality was detected with ultrasonography?

The fetus had a severely malformed skull, consistent with congenital hydrocephalus.

The fetus could not be palpated during rectal examination of the mare, which was an unusual finding for the stage of gestation. Mild cervical relaxation was detected on transrectal palpation and ultrasonographic examination, with a mean cervical diameter of 27.76 mm (reference range, 21.91 to 19.69 mm at 4 months of gestation). Additionally, the uteroplacental unit appeared corrugated. The mean combined thickness of the uterus and placenta at the cervical pole was 0.82 cm (reference range, 0.2 to 0.4 cm), and this abnormal finding was likely caused by the fetus and cranial aspect of the mare's uterus having been positioned far forward in the mare's abdominal cavity. (Supplementary Figure S2, available at: avmajournals.avma.org/doi/suppl/10.2460/javma.258.12.1345). The mare also had a small left uterine artery diameter (3.3 mm; reference range,1 6 to 7 mm for mares at 120 to 180 days of gestation). However, overall results of color flow Doppler ultrasonography indices of the uterine arteries, umbilical cord, and fetal carotid arteries suggested adequate fetoplacental perfusion. Additionally, the fetal aortic diameter at the anterior portion of the aorta during systole was 8.2 mm (reference range, 6 to 8 mm in midgestation), which indicated an adequate size for a fetus at day 144 of gestation. The fetal heart rate during rest and activity ranged between 130 and 155 beats/min, respectively (reference range, 120 to 140 beats/min at rest and in midgestation).

The fetus had a slightly large combined (width plus length) fetal eye orbital diameter (approx 45.1 mm; reference range, 38 to 40 mm; Figure 2). The eye width was measured from the anterior margin lens capsule to the inner margin of the optic disc, and eye length was measured across the maximum distance between the inner margins of the vitreous body. The fetal biparietal diameter (BPD) was 97.6 mm (reference range, 40 to 50 mm in midgestation), which was a measurement obtained with the ultrasound beam perpendicular to the fetal central axis at the level of the widest span of the cranium and where the space for the cerebral hemispheres appeared symmetric. For this measurement, the ultrasound calipers were placed at the outer edge of the near calvarial wall and inner edge of the far calvarial wall. The fetal BPD was disproportionately large, compared with the combined fetal orbital diameter, and suggested an excessively large skull for the gestational age. Measurements at the longest and widest dimensions of the fetal stomach and gonads were within reference limits.

Clinical assessment of fetoplacental well-being by use of transabdominal ultrasonography during the second half of gestation in mares is a valid diagnostic tool.2 However, this type of examination is not performed as routinely in horses as it is in people, in whom fetal growth during the last trimester is assessed more stringently and comprehensively, including measurements of the fetal femur length, BPD, head circumference, abdominal diameter, and abdominal circumference.

In the mare of the present report, ultrasonography revealed a fetus with a severely enlarged BPD (97.6 mm) that was incompatible with the gestational age of the fetus and consistent with congenital hydrocephalus. Few reports3,4 have described the diagnosis of congenital hydrocephalus in neonatal foals, and MRI is preferred for detecting structural abnormalities of the head in newborn foals.4 However, 2-D ultrasonography is an ideal tool to assess the fetus during gestation; the modality is cost-effective, provides real-time imaging with high resolution, and is safer for the mare and fetus.

Hydrocephalus occurs through disruption of the normal flow of CSF from its point of formation in the choroid plexus to its point of absorption at the arachnoid villi in the venous sinuses. Consequently, the intracranial pressure increases, causing distension of the ventricular system of the brain and enlargement of the skull.2 Hydrocephalus is an uncommon condition associated with dystocia in mares, with an estimated prevalence of hydrocephalus of 0.6 affected foals/1,000 births.5 Furthermore, congenital hydrocephalus is considered an autosomal recessive hereditary condition associated with a mutation in the B3GALNT2 gene, with higher prevalence in Friesian and Belgian horses (vs other breeds) owing to their limited genetic pools.6,7 The genetic profile of the fetus of the present report was not investigated.

Ultrasonographic examination of the mare of the present report also revealed a disparity in the diameters of the right and left uterine arteries (7.9 and 3.3 mm, respectively), whereas the diameters of both uterine arteries generally increase linearly throughout pregnancy and with the parity of the mare.1 The smaller diameter of the left uterine artery did not affect the overall size of the fetus, and whereas small fetal aortic and orbital diameters are often associated with high-risk pregnancies, those measurements for the fetus in the present report were within reference limits for its gestational age.8

Because of a poor prognosis for fetal survival and a high risk of complications for the mare, the owners elected to hospitalize the mare and induce parturition. The mare was treated with cloprostenol (0.55 μg/kg [0.25 μg/lb], IM) and misoprostol (2 μg/kg [0.9 μg/lb]; mixed with 10 mL of sterile lubricating gel and applied topically to the cervix). Approximately 2 hours later, preterm parturition had advanced to the point that manual assistance could be provided for vaginal delivery of the fetus. A stillborn fetus was delivered. The fetus had thin and craniodorsally distended bones of the calvarium, consistent with hydrocephalus (Figure 3). The uterine fluid and placenta were grossly normal for the stage of gestation. Physical and ultrasonographic examination postpartum revealed anechoic uterine intraluminal fluid accumulation (diameter, approx 3.4 cm) in the uterine body and no trauma to the mare's reproductive tract.

The mare was treated with oxytocin (20 U total, IM, q 1 h for 6 hours, then q 3 h for 18 hours) and underwent uterine lavage with 5 L of lactated Ringer solution every 12 hours for 2 days. The mare progressed well and was discharged with a prescription for oxytocin (20 U total, IM, q 6 h for 3 days) 3 days after the initial examination. When the mare was returned for a recheck examination 3 months later, findings were unremarkable and the decision was made to enroll the mare as a recipient in another embryo transfer program.