Photomicrograph of a fine-needle aspirate specimen obtained from 1 of numerous translucent polyp-like masses in both nasal cavities and the rostral portion of the nasopharynx in a 2-year-old Labrador Retriever-cross with sudden onset of nasal congestion and difficulty breathing. The masses partially occluded the nasal cavity with destruction of the nasal turbinates. Notice the large round cells with abundant cytoplasm containing multiple small punctate vacuoles and round coarsely stippled nuclei with a single nucleolus. Modified Wright stain; bar = 50 μm.

Photomicrographs of sections of a nasopharyngeal biopsy specimen obtained from the dog in Figure 1. The sections have been stained with H&E stain (A); with immunohistochemical stains for CD18 (B), CD3 (C), S100 (D), and vimentin (E); and with toluidine blue stain (F). The neoplastic cell population was positive for vimentin and negative for CD18, CD3, and S100. The neoplastic cells did not react with toluidine blue stain. For all panels, bar = 100 μm. 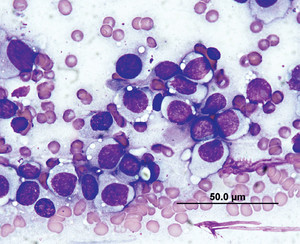 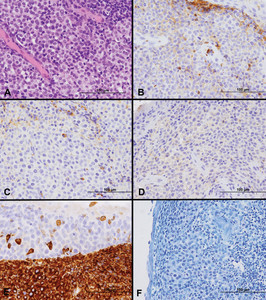 A 2-year-old 20.7-kg (45.5-lb) castrated male Labrador Retriever–cross was evaluated at a local veterinary clinic in Saskatoon, Canada, because of sudden onset of nasal congestion and difficulty breathing. The dog was originally from Mexico and had been brought to Canada 1 month prior. At that time, the dog had alopecia and severe pruritus; the dog received topical skin treatment and antimicrobial and deworming medications orally. The dog remained pruritic, and treatment with prednisolone was started 1 week prior to the development of the respiratory issues.

Nasal endoscopy revealed destruction of the turbinate bones and translucent polyp-like masses in both nasal cavities and the rostral portion of the nasopharynx that partially obstructed airflow from the nasal cavity. Fine-needle aspiration of the nasal and nasopharyngeal masses was performed by the referring veterinarian and the samples were submitted for cytologic evaluation (Figure 1) to Prairie Diagnostic Services in Saskatoon, Canada. On cytologic examination, the nasal mass sample was highly cellular and contained numerous large round neoplastic cells with abundant pale basophilic cytoplasm containing multiple small punctate vacuoles. The nuclei were round with coarse granular chromatin and a single prominent nucleolus. Mitotic figures were frequently noted. A small number of macrophages, lymphocytes, and ciliated respiratory columnar epithelial cells in addition to abundant streaming mucus were intermixed with the neoplastic cells. Endoscopic biopsy specimens were collected from the nasal cavity and nasopharynx and submitted for histologic evaluation.

Formulate differential diagnoses from the history, clinical findings, and Figure 1—then turn the page →

Histologic evaluation of the endoscopic biopsy specimens revealed a densely cellular, poorly demarcated, infiltrative, unencapsulated neoplasm within the lamina propria of the nasopharynx (Figure 2). The neoplasm was composed of closely packed sheets and cords of round cells supported by fine fibrovascular stroma. The cells had indistinct borders, a moderate amount of granular eosinophilic vacuolated cytoplasm, and a central round nucleus with vesicular chromatin and a single prominent nucleolus. Mitotic figures were common. Subacute, mixed inflammation characterized by abundant neutrophils, lymphocytes, and plasma cells that permeated the mass and the mucosal epithelium was present. Morphologically similar tumor cells were noted in the biopsy specimen from the nasal cavity. Immunohistochemical staining revealed that the neoplastic cell population was positive for vimentin and negative for MHC II (not shown), CD18, CD3, and S100. The neoplastic cells did not stain with toluidine blue or methyl green pyronine (not shown).

Morphologic diagnosis and case summary: transmissible venereal tumor located bilaterally in the nasal cavity and rostral portion of the nasopharynx of a dog.

Canine transmissible venereal tumor (CTVT) is a contagious neoplasm that is transmitted between dogs via allogeneic transfer of living neoplastic cells onto abraded mucous membranes during coitus.1,2 It is 1 of only 2 naturally occurring contagious tumors in mammals, the other being Tasmanian devil facial tumor disease (DFTD).1,3 The earliest known report of CTVT was from London in 1810,4 but recent evidence indicates that CTVT may have originated thousands of years ago, and that it represents one of the oldest mammalian somatic cell lineages.1,4,5 The disease is found in dogs on all continents except Antarctica1,4 and is endemic in at least 90 countries worldwide.4 Cases of CTVT are rarely reported in Canada, with virtually all cases involving dogs imported from abroad.4

Canine transmissible venereal tumor most commonly develops in young (2- to 8-year-old), free-roaming, sexually intact dogs and lacks sex predisposition.1,2 Because it is transmitted during mating, most CTVT lesions are found in the genital regions and appear as nodular or pedunculated, friable, cauliflower-like masses that may ulcerate or become hemorrhagic.1,2 A presumptive diagnosis is often made on the basis of signalment and the presence of characteristic genital lesions.1–3 Extragenital locations of CTVTs most commonly include the nose and oral cavity1,6 and are found more frequently in male dogs because of the higher prevalences of licking and sniffing behaviors, compared with females.1,6 When only extragenital CTVT lesions are present, as in the dog of the present report, the diagnosis may be more challenging.1,7,8

On the basis of the findings of cytologic and histologic examinations of affected tissue samples, primary differential diagnoses for CTVTs include other round cell tumors (eg, histiocytoma, poorly differentiated mast cell tumor, amelanotic melanoma, and lymphoma). For the dog of the present report, negative results of toluidine blue staining and immunohistochemical staining for CD3, CD18, MHCII, and S100 in biopsy specimens were used to exclude these possibilities.1,2,7–10 Canine transmissible venereal tumors have been reported to be strongly positive for vimentin,2,7–10 as was the tumor in the dog of the present report. It has been suggested that CTVT may be of histiocytic origin2,7; however, histiocytic markers (eg, CD18) are frequently not present.7 Compared with normal canine somatic cells that have 78 chromosomes (of which 2 are metacentric and 76 are acrocentric), CTVT cells typically contain 59 chromosomes (range, 57 to 64 chromosomes), of which 13 to 17 are metacentric and 42 to 46 are acrocentric.1–3 This unique feature can be used to definitively diagnose CTVT; however, karyotyping and molecular methods of determining chromosomal abnormalities may be difficult to access for canine samples and were not available locally for the case described in the present report.

Like CTVT, DFTD is a transmissible somatic cell neoplasm with stable chromosomal abnormalities that can be detected via karyotyping.11,12 The DFTD cells are also histologically pleomorphic and anaplastic, necessitating immunohistochemical techniques for their differentiation from other neoplasms.11–13 The original cell type of DFTD is controversial, with early reports12,13 suggesting a neuroendocrine origin based on consistent positivity for vimentin and variable positivity for S100, neuron-specific enolase, and synaptophysin. However, results of 1 study12 suggest that DFTD may originate from Schwann cells in the peripheral nervous system because tumor cells consistently express periaxin, a protein required for the maintenance of myelin.

Canine transmissible venereal tumors are antigenic, provoking both cell-mediated and humoral immune responses that may result in spontaneous regression of the tumor in many dogs.1–3 The immunocompetence of the host dog is an important determinant of tumor growth, metastasis, and remission.1,2 In the case described in the present report, the dog did not develop clinical signs of respiratory tract disease until after the administration of a glucocorticoid (prednisolone), suggesting rapid tumor growth triggered by immunosuppression.

Various treatments including chemotherapy, radiation therapy, immunotherapy, and surgical excision have been used in dogs with CTVTs.1,2 Vincristine chemotherapy is considered to be the treatment of choice, with weekly IV injections at a dosage of 0.025 mg/kg (0.011 mg/lb) for 4 to 8 weeks.1,2 This protocol is reported to be relatively safe and economical and provides a complete and lasting response in 90% to 95% of treated dogs.2 The dog of the present report was treated with vincristine chemotherapy and was doing well with no recurrence of disease 4 months after the last chemotherapy treatment.