Photographs of twin alpaca (Vicugna pacos) fetuses aborted at 9 months of gestation. One fetus was extracted manually during dystocia and had signs of brachygnathia superior and hydrocephalus (A); the second smaller fetus was expelled 4 hours later within the fetal membranes (B).

Photographs of the aborted twin alpaca fetuses of Figure 1. The smaller fetus was located closer to the tip of the uterine horn (A), and both fetuses shared the same chorion and were attached to the same uterine horn (B). 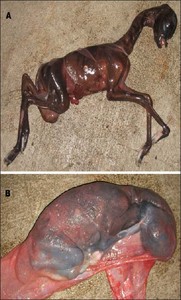 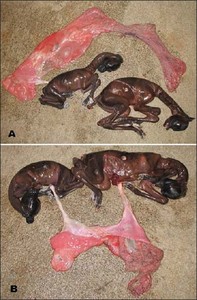 A 2-year-old primiparous female Suri alpaca (Vicugna pacos) was referred to the Veterinary Medical Teaching Hospital at Kansas State University because of dystocia. The dystocia developed during abortion at 9 months of gestation. The alpaca had been in labor for 8 to 10 hours prior to admission.

The perineal area was examined; no fetal membranes or fetal appendages protruded from the vulva. Manual vaginal examination revealed a fetus located in the uterus; it was in anterior presentation and dorsosacral position with right lateral flexion of the neck. No signs of fetal viability were detected. The birth canal was in good condition with no palpable evidence of edema or lacerations.

Delivery per vaginam was performed. The fetus was mutated within the uterus to correct the neck flexion and extend the head and neck, and manual traction was then applied to extract the fetus. The fetus had gross signs of brachygnathia superior and mild hydrocephalus (Figure 1).

The fetal membranes remained attached to the uterus at the time of fetal extraction. No additional examinations of the vagina or uterus were performed at that time. The alpaca was placed in a stall for observation. Approximately 4 hours after delivery of the fetus, the fetal membranes were expelled. A second fetus was contained within the fetal membranes (Figure 1).

The second fetus had a grossly normal appearance and was subjectively smaller than the first fetus (Figure 2). Both fetuses were female and had the same coat color. Gross examination revealed that although each fetus was surrounded by its own amnionic membrane, both shared the same chorion. Amnionic membranes were adjacent but not fused. It was not possible to determine accurately whether there was a single allantoic membrane or 2 allantoic membranes. The distribution of chorionic villi was uniform along the entire surface of the chorion; no avillous areas that would have corresponded to an area of apposition of the twin membranes were evident.

What is the chorionic classification of the placentation for these twin fetuses? Please turn the page.

The placenta was classified as monochorionic diamnionic.

The alpaca was treated with ceftiofur sodium (2.2 mg/kg [1 mg/lb], IV, q 24 h for 7 days), flunixin meglumine (1.1 mg/kg [0.5 mg/lb], IV, q 24 h for 3 days), and oxytocin (20 U, IM, q 6 h for 1 day). The day after the alpaca aborted, an ultrasonographic examination was performed per rectum to determine the number of corpora lutea and condition of the uterus. Only 1 corpus luteum was detected (on the right ovary); there were no relevant structures visible on the left ovary. A moderate amount of anechoic fluid was detected within the uterine body. Vaginal examination with a speculum revealed the partially retained fetal membrane (tip of the nongravid horn) and an accumulation of fluid in the cranial aspect of the vagina. The cervix was intact, and there was slight bruising of the vaginal wall. The uterus was lavaged with 800 mL of sterile saline (0.9% NaCl) solution; the retained portion of the fetal membrane was flushed from the uterus during the lavage. The alpaca did not develop any complications.

The placenta of this set of twins was classified as monochorionic diamnionic. Cytogenetic testing was not performed to confirm zygosity of the fetuses. However, the fact there was only 1 corpus luteum and 1 chorion and that both fetuses were of the same sex and had the same coat color was consistent with monozygotic twins.

Monozygotic twins are rare in domestic animals. In cattle, monozygotic twins are identified grossly by the presence of 1 corpus luteum, 1 chorion, and same-sex twins, as was the case for the alpaca fetuses described in the present report. On the basis of these criteria and by use of a mathematical model, the estimated prevalence of monozygotic twins in dairy cattle reportedly ranges from 4% to 14% of all twin births.2 A prevalence of 4.7% among all pregnancies with twin Holstein calves has been confirmed through the use of microsatellite genetic markers.2 Monozygotic twins represented 1.6% of all porcine embryos analyzed genetically in 1 study.3 The prevalence of monozygotic twins in mares is not known; however, their existence has been confirmed.4 All involved monochorionic diamnionic equine twins, with or without division of the allantoic membrane.4 In that report,4 equine monozygotic twins were not identified during early pregnancy diagnosis (days 14 to 16 of gestation). However, some monozygotic twins were detected between days 24 and 33 of gestation when the 2 embryos and growing allantoic cavities became visible ultrasonographically. The mechanism that leads to spontaneous division of an embryo to form twins in domestic animals is not known.

Twin alpaca fetuses are rare and nearly always result from double ovulations. The reported prevalence of twins during early gestation in alpacas ranges from 2.8% to 12.5%.5,6 However, most pregnancies with twins spontaneously reduce to a singleton fetus by days 35 to 52 of gestation.5–7 There are few reports7,8 of failure of spontaneous early reduction of twins and abortion of twin fetuses in alpacas. The monochorionic nature of the placenta in the present report may have provided a large area of placentation and contributed to the ability of the dam to support both fetuses until 9 months of gestation. Also, alpacas rarely give birth to live twins, which suggests that late-gestation pregnancies with twins usually result in the death of 1 or both fetuses, as was the case for the fetuses described here.

Applying human nomenclature to twin fetuses in alpacas may not be entirely accurate because the anatomy of the placenta differs between these species and the allantois is not included in the human classification. In alpacas, the placenta has a bright red chorionic surface, and the umbilical cord extends to the amniotic membrane on the placenta of the lesser curvature of the uterine horn, where the amnion is in apposition with the allantois. The amnion is partly adhered to the chorion to form the chorioamnion and to the allantois to form the allantoamnion. The allantois occupies the entire right horn of the uterus and extends along the lesser curvature of the left uterine horn. The amnion is confined to the left horn. Camelids also have an additional 1- to 2-mm-thick opaque membrane that covers the fetus and attaches to the mucocutaneous junctions. It was obvious in the present report that the chorion was shared between the 2 fetuses but that the amnion was not. However, even after thorough examination of the fetal membranes, it was not possible to accurately determine whether the allantoic membrane had divided.

One of the fetuses in the present report had grossly obvious congenital abnormalities. Monozygotic twins are associated with a higher incidence of congenital malformations in humans, compared with the incidence of congenital abnormalities in dizygotic twins or a singleton fetus.1 Hydrocephalus, anencephaly, omphalocele, atresia or stenosis of the gastrointestinal tract, and congenital heart defects are more prevalent in monozygotic twins. It is thought that there may be discordance between embryos in the distribution of differentiated cells or chromosomes or gene expression during division.1

To the authors’ knowledge, the monochorionic twin fetuses described here represent the first report of this condition in alpacas. It must be emphasized that genetic testing was not performed to confirm the diagnosis of monozygotic twins. Although unlikely, fusion of the chorions in dizygotic twins is possible.3 It was suspected that the alpaca fetuses were monozygotic twins because there was only 1 corpus luteum and the twins were of the same sex and had the same coat color.

The present report has important clinical implications for pregnancy diagnosis and management in alpacas. Pregnancy diagnosis in alpacas is best performed via ultrasonography per rectum at days 16 to 23 after mating.7 At this stage, the embryonic vesicle appears as an elongated fluid-filled structure within the left uterine horn. The embryo and allantoic cavity are first visible at 21 to 26 days after mating, with a heartbeat appearing at 24 to 30 days after mating. Per rectal ultrasonography for pregnancy diagnosis at 16 days of gestation would likely reveal a single vesicle in alpacas pregnant with monochorionic twins. However, 2 embryos would be identifiable after day 21. Twin fetuses are more evident ultrasonographically between days 25 and 30, compared with earlier in gestation, which makes this the ideal time for detection of twins.7 Because spontaneous reduction occurs during days 35 to 52 of gestation, ultrasonographic examination after this time is recommended to confirm progression in the development of a singleton fetus. Failure of spontaneous reduction will likely result in abortion of twin fetuses. As was evident in the alpaca reported here, abortion of twin fetuses can lead to dystocia and total or partial retention of fetal membranes. Because births of live twins are extremely unlikely, and given the potential for complications as a result of the abortion of twin fetuses, pregnancy termination may be recommended when twins are identified at > 35 to 52 days of gestation.

The low PCV and total protein concentration in the alpaca dam had no clear cause and were assumed to have been associated with the abortion and placental blood loss during prolonged labor. The alpaca did not have a history of illness or poor body condition, and results of physical examination failed to identify other abnormalities. The alpaca was discharged from the hospital in apparent good health 3 days after admission. The owner was instructed to monitor the alpaca; no further problems were reported.