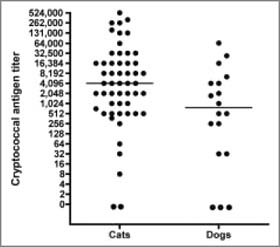 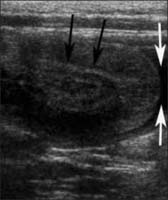 The World Organization for Animal Health (OIE) is developing guidance on veterinary education, particularly for countries with limited resources. The AVMA's new strategic plan includes goals for improving veterinary education, as well as improving the economics of the profession, animal welfare, research funding, and member participation.

What Is Your Neurologic Diagnosis?

What Is the Evidence?

Categorical dependent variables and censored data are frequently encountered in veterinary research. Statistical methods for analyzing these types of data include calculation of relative risks, odds ratios, and hazard ratios.

Distribution of blastomycosis cases among humans and dogs in Illinois 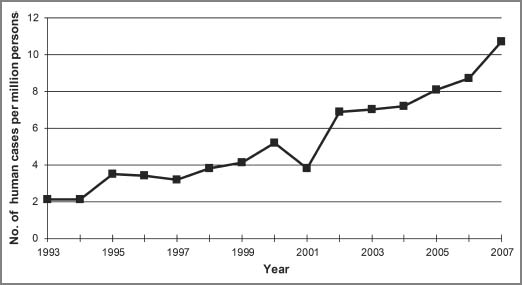 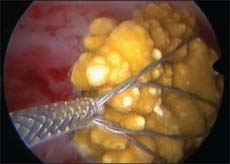 A review of medical records for 23 dogs and 4 cats suggests that transvesicular percutaneous cystolithotomy may represent a viable alternative for retrieval of cystic and urethral calculi. For the procedure, a ventral midline approach was made into the abdomen over the urinary bladder apex, and a screw cannula was inserted at the bladder apex for normograde rigid and flexible cystourethroscopy. Uroliths were removed with a stone basket retrieval device and retrograde flushing and suction. Urolith number ranged from 1 to > 30; urolith size ranged from < 1 to 30 mm. All patients were discharged within 24 hours after surgery, and no postoperative complications were reported at the time of suture removal.

Because of its common occurrence, transitional cell carcinoma is the primary differential diagnosis whenever an intraluminal urinary bladder or urethral mass is detected. Results of a new study suggest that cystoscopic biopsy may be an effective method to obtain biopsy samples from dogs with TCC of the bladder and urethra. For the study, medical records of 92 dogs with histologically confirmed TCC were reviewed. When cystoscopic biopsy was used as the initial biopsy method, biopsy samples were of diagnostic quality in 65% (13/20) of the male dogs and 96% (50/52) of the female dogs. Cystoscopic biopsy was significantly more likely to yield samples of diagnostic quality in female dogs than in male dogs.

Results of a review of medical records for 62 cats and 31 dogs in California with cryptococcosis suggested that strains of Cryptococcus spp may have host specificity. Specifically, Cryptococcus gattii was more commonly detected in cats (7/9 for which species identification was performed), and Cryptococcus neoformans was more commonly detected in dogs (6/8). The distribution of involved tissues was different between cats and dogs, possibly because of strain differences or referral bias. Importantly, findings suggested that antigen assays alone may not be sufficient to establish a diagnosis of cryptococcosis in cats and dogs, in that results of serum cryptococcal antigen tests were positive for 51 of 53 cats and 15 of 18 dogs that were tested.

Abdominal ultrasonography in a 6-month-old female cat admitted because of intermittent hematuria and inappropriate urination revealed a multilayered mass in the urinary bladder apex. During exploratory surgery, partial inversion of the urinary bladder was confirmed. The invaginated bladder apex was manually reduced, and partial cystectomy was performed to remove the invaginated section. Clinical signs resolved following surgical resection of the bladder apex and antimicrobial treatment for concurrent urinary tract infection. Findings suggest that partial invagination of the urinary bladder should be considered in the differential diagnosis for cats with clinical signs of hematuria, stranguria, and inappropriate urination.

Two dogs were referred for surgical removal of cutaneous tumors that had previously been treated by intratumoral injection of a herbal preparation containing bloodroot (Sanguinaria canadensis) extract. Eleven days following injection of bloodroot extract into a small dermal tumor, dog 1 developed a large, soft, fluctuant cutaneous mass at the site of injection. Dog 2 had a small dermal tumor treated in similar fashion, but an exuberant reaction was not observed following injection of bloodroot extract in this dog. Both dogs underwent surgical excision of the cutaneous tumors. Histologic evaluation revealed necrosis and inflammation in the excised tissues. Clinicians should be aware of the potential for harm caused by the use of bloodroot-containing products.