Lateral (A) and ventrodorsal (B) radiographic views of the abdomen and caudal portion of the thorax of a 6-year-old spayed female ferret evaluated because of acute bilateral hind limb paralysis, anorexia, and lethargy and progressive weight loss. 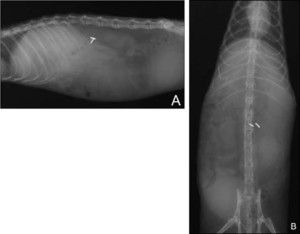 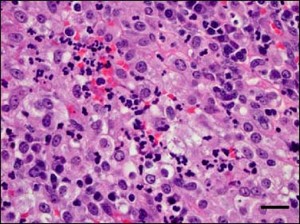 Editorial Type:
What Is Your Diagnosis?

A 6-year-old spayed female ferret was evaluated at the Louisiana State University School of Veterinary Medicine for acute bilateral hind limb paralysis, anorexia, and lethargy and progressive weight loss. Approximately 1 year previously, the ferret had its left adrenal gland removed in an effort to reduce the clinical effects of adrenocortical disease. There was also suspicion of an insulinoma at that time because the ferret was hypoglycemic (serum glucose, 57 mg/dL; reference range, 85 to 207 mg/dL).1 Vaccination status was unknown, and medication for heartworm prevention was not being administered. Prednisone and diazoxide were prescribed by the referring veterinarian to treat the suspected insulinoma, and amoxicillin was also given to treat possible stress-induced gastritis. Prior to admission, the referring veterinarian palpated an enlarged, firm spleen with irregular borders, and lytic lesions were evident on the right side of the T14 vertebra and left side of L1 on radiographic images of the entire body.

Determine whether additional imaging studies are required, or make your diagnosis from Figure 1—then turn the page →

The abdomen appears distended with a loss of radiographic detail, and the spleen is large. Small, round, sharply defined radiolucent areas in the left 11th and 13th ribs with similar lesions in the right 9th and 10th ribs and left 8th rib at the costochondral junction and right 13th rib near the vertebral column are present (Figure 2). The left 11th rib has a disrupted border that forms a short defect.

The body and lamina of T14 are diffusely hyperlucent, compared with adjacent vertebrae (Figure 2). The left lateral aspect of the middle portion of the body and lamina of L1 contains a focal, well-defined radiolucent area that extends a third of the length of the vertebra. Differential diagnoses for these lesions included metastatic neoplasia such as carcinoma, lymphoma, hemangiosarcoma, and multiple myeloma.

There has only been 1 report2 of multiple myeloma in ferrets to our knowledge. Multiple myeloma is a diagnosis that is made in dogs and cats if 2 of 4 criteria are met in a patient.3 These 4 criteria include monoclonal gammopathy, radiographic evidence of bone lysis, Bence-Jones proteinuria, and cytologic evidence of plasma cell neoplastic infiltration in the bone marrow.3 Tests for monoclonal gammopathy and Bence-Jones proteinuria were not performed for the ferret of our report because of the convincing cytologic findings on the fine-needle aspirate and the radiographic distribution and number of the lytic bone lesions.

The ferret of this report met 2 of the 4 criteria needed to diagnose multiple myeloma, which included multiple lytic bone lesions and cytologic evidence of bone marrow infiltration of neoplastic plasma cells. The finding of multiple myeloma in this ferret indicates that radiographic lesions for the disease are similar across species. The classic radiographic bone lesions of multiple myeloma usually appear as punched-out areas of lysis in long flat bones such as the pelvis, bones of the skull, spinous processes of the vertebrae, long bones, and ribs.3 The hind limb paralysis in the ferret of this report was most likely induced by spinal cord compression. However, further imaging studies, such as myelography and computed tomography, were declined by the owner. The cause of the loss of abdominal detail was not further pursued, but abdominal ultrasonography could have been helpful in determining whether this was associated with the enlarged spleen or peritoneal effusion in the form of neoplasia. The hypoalbuminemia, hypercalcemia, hypocholesterolemia, anemia, and thrombocytopenia of this ferret reflect abnormalities reported for other small animals with multiple myeloma.4

The goal of treating multiple myeloma in cats and dogs is to target neoplastic cells and paraneoplastic syndromes. An alkylating agent such as cyclophosphamide or melphalan is the chemotherapeutic drug of choice for multiple myeloma.3 Treatment options were discussed with the owners who elected to take the ferret home and do follow-up care with their veterinarian.