Photograph of the eye of a great horned owl with prominent nuclear cataracts and multifocal punctate cortical cataracts. 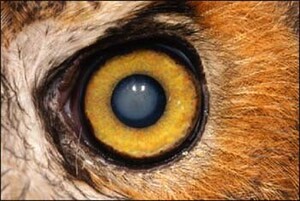 Case Description—A great horned owl of estimated age < 1 year that was captured by wildlife rehabilitators was evaluated because of suspected cataracts.

Treatment and Outcome—For visual rehabilitation, cataract surgery was planned and intraocular lens design was determined on the basis of values obtained from the schematic eye, which is a mathematical model representing a normal eye for a species. Cataract surgery and intraocular lens placement were performed in both eyes. After surgery, refraction was within −0.75 diopters in the right eye and −0.25 diopters in the left eye. Visual rehabilitation was evident on the basis of improved tracking and feeding behavior, and the owl was eventually released into the wild.

Clinical Relevance—In raptors with substantial visual compromise, euthanasia or placement in a teaching facility is a typical outcome because release of such a bird is unacceptable. Successful intraocular lens implantation for visual rehabilitation and successful release into the wild are achievable.

Case Description—A great horned owl of estimated age < 1 year that was captured by wildlife rehabilitators was evaluated because of suspected cataracts.

Treatment and Outcome—For visual rehabilitation, cataract surgery was planned and intraocular lens design was determined on the basis of values obtained from the schematic eye, which is a mathematical model representing a normal eye for a species. Cataract surgery and intraocular lens placement were performed in both eyes. After surgery, refraction was within −0.75 diopters in the right eye and −0.25 diopters in the left eye. Visual rehabilitation was evident on the basis of improved tracking and feeding behavior, and the owl was eventually released into the wild.

Clinical Relevance—In raptors with substantial visual compromise, euthanasia or placement in a teaching facility is a typical outcome because release of such a bird is unacceptable. Successful intraocular lens implantation for visual rehabilitation and successful release into the wild are achievable.

A great horned owl that weighed 1.5 kg (3.3 lb) and that was of unknown sex and estimated age < 1 year was evaluated at the University of Wisconsin Ophthalmology Service for suspected cataracts. The bird had a history of being perched on a fence with limited movement for 3 days. The bird was captured by wildlife rehabilitators for assessment and flew well in a flight cage, although the rehabilitators witnessed the owl occasionally flying into objects. Upon examination, the bird was lean and had pectoral muscle atrophy but no other physical abnormalities. Ophthalmic examination via slit-lamp biomicroscopy revealed prominent nuclear cataracts and multifocal punctate cortical cataracts in both eyes but no evidence of anterior uveitis (Figure 1). The owl had brisk direct pupillary light reflexes, was able to track moving objects, and had a positive menace response in both eyes. Complete fundic examination was hindered by the presence of the cataracts; however, a small degree of chorioretinal pigment clumping was noted nasal to the pecten in the left eye. To determine whether the owl was a candidate for cataract surgery, it received general anesthesia for complete ocular ultrasonography, electroretinography, and collection of blood for analysis. Ocular ultrasonography revealed no evidence of retinal detachment or other ocular defects, and electroretinogram values were within reference limits in both eyes, indicating normal retinal function.1,2 Results of a CBC and blood glucose analysis were within reference limits.

The following day, after induction of general anesthesia, an intracameral injection of 0.05 Mg of atracuriuma into each eye was performed with a tuberculin syringe and needle, entering at the limbus. This procedure was necessary to achieve pupillary dilation to facilitate phacoemulsification.

Bilateral cataract surgery was performed. Following surgical preparation of the eye, a clear corneal incision with a 3.2-mm keratomeb was created to enter the anterior chamber. A clear corneal incision was chosen to avoid the prominent scleral ossicles that extend to the limbus in birds.3 The anterior chamber was filled with viscoelastic agent,c and a 10-mm capsulorrhexis was created in the anterior capsule with a cystotomed and forceps.e To remove the cataract, a combination of routine phacoemulsification with irrigation and aspiration was performed as described.3,4 The corneal incision was extended to a length of 10.5 mm to accommodate the 10-mm optic of the IOL. At this time, the anterior chamber and capsular bag were refilled with viscoelastic agent and the intraocular lensf was inserted and centered in the capsular bag. The IOL was a 1-piece, custom-made PMMA lens with a 17-mm haptic diameter (tip to tip), 10-mm central optic, and power of +13.8 diopters. The dioptric strength (F) for the IOL was calculated with values obtained from the published schematic eye mathematical model for great horned owls and the Binkhorst equation5 as follows:

Closure of the corneal incision was performed routinely with 8-0 polyglactin 910g in a simple interrupted pattern, oversewn with a continuous pattern. A subconjunctival injection of triamcinoloneh (0.075 mg) was administered into the posterior aspect of the nictitans, and a temporary tarsorrhaphy with 6-0 silki suture was performed to protect the corneal wound.

Two months after surgery, the owl was able to successfully capture live prey and improved in physical status. After 3 months of rehabilitation, the bird was fitted with a radio transmitter on a biodegradable harness and released back into the region where it had been found. It was successfully monitored for 6 months before the tracking system was lost as planned.

Cataracts or opacities of the lens or its capsule can develop in birds because of traumatic, developmental, genetic, nutritional, toxic, or inflammatory factors.3,7,8 In raptors, trauma is the primary cause of ocular disease.7 In 1 study,9 14.5% of raptors evaluated at 2 centers had some form of ocular lesion and 90% of these resulted from a physical injury. Senile cataracts have also been reported in aged birds,10 and juvenile cataracts have been reported in tawny and screech owls.7,11 One study12 evaluating the prevalence of developmental ocular disease in wild-caught raptors found that cataracts occurred frequently and often concurrently with other ocular disorders such as microphthalmia.

Cataracts can be characterized by the location of the lens lesion and its severity. The owl reported here had nuclear and incomplete cortical cataracts. Abnormalities in lens development may result in a congenital nuclear cataract.3 Nuclear lens opacities generally are nonprogressive; however, they have substantial effects on vision because of their axial location in the optical pathway.3 Although these lesions are typically congenital, there is no evidence that congenital lens opacities in raptors are heritable and environmental, developmental, or nutritional factors may play a role in causing them.3,13 Trauma also induces development of cataracts in raptors; however, given the lack of other clinical evidence of trauma in the owl reported here; the nuclear location of the lesions; and bilateral, symmetrical nature of the lesions, trauma was considered unlikely in this patient.

Cataract surgery has been reported in a variety of raptors including owls.4,8,10 Needle aspiration, traditional extracapsular extraction, and ultrasonic phacoemulsification have all been successfully used.8 To facilitate cataract surgery, an intracameral injection of atracurium was administered for pupillary dilation. The iris of several avian species, including owls, consists of smooth and striated muscle.14 The circumferential striated muscle functions as the primary pupillary sphincter in owls.14 The striated muscle is unresponsive to typical mydriatics and cycloplegics; therefore, the use of a neuromuscular blocking agent is required.3

To the best of our knowledge, the owl reported here was the first avian patient to undergo successful intraocular lens implantation with documented successful rerelease into the wild. In raptors with substantial visual compromise, euthanasia or placement in a teaching facility is a typical outcome because release of such a bird is unacceptable. The impact of impaired vision on survivability is affected by the species, nature and extent of ocular lesions incurred, age of the animal, feeding behaviors, and duration of the ophthalmic disorder. It is inhumane to release a bird that has a high likelihood of death from starvation. Because of this, euthanasia is a common outcome for such patients because teaching facilities have sufficient birds not suitable for release.7 It is the authors’ opinion that optical correction following cataract surgery contributed substantially to the survival of this bird following release.

The determination of power for the intraocular lens was based on measurements obtained from a previous report5 in which a schematic eye for great horned owls was developed with data obtained from 6 mature great horned owls. A schematic eye is an internally consistent mathematical model that approximates normal features for a given species.5 The model accounts for the various refractive indices, anatomic location of all optical interfaces, and their radii of curvature.5 The proper lens power was determined to be +13.82 diopters as derived from the Binkhorst equation and the values obtained from the schematic eye model. The proper diameter of the intra-ocular lens was determined by measuring the equatorial diameter of the lens, including the annular pad, from 5 formalin-fixed adult great horned owl eyes with a caliper. A 10-mm-diameter optic was determined by use of the normal resting pupil diameter and degree of pupillary excursions observed for great horned owls.5,14 Variables for an optimized IOL will vary by species, so one size of intraocular lens is not appropriate for all species. In a study15 of 15 species of owls, most were within 0.5 diopters of emmetropia. In the owl reported here, optical correction following cataract extraction was achieved by placement of corrective IOLs and verified by use of streak retinoscopy. Retinoscopy is a clinical procedure that allows the refractive state of an eye to be determined by illuminating the eye with a streak of light and observing the nature of the returning light reflex.16 By use of this reflex, a clinician uses a series of hand-held lenses to determine whether refractive error is present.16 This technique is applicable across species and has been validated for use in great horned owls.15 Successful visual rehabilitation was determined by radio tracking of the owl after release into the wild.