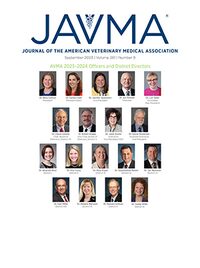 The AVMA Executive Board tackled wild animals, research funding, acclimation certificates, and other tough topics during its spring meeting. 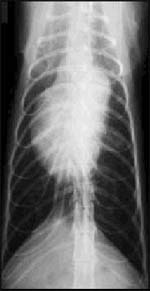 A 7-year-old cat evaluated because of a sudden onset of recumbency, unresponsiveness, ptyalism, and shallow breathing

A 15-year-old pregnant mare examined to determine the cause of frank, hemorrhagic vaginal discharge

Nutrient-gene interactions and their role in complex diseases in dogs

By combining canine sequence data, genomic technologies, and bioinformatics into research initiatives already in place, researchers in the fields of nutritional genomics and proteomics will soon change the paradigm by which veterinarians and nutritionists understand and apply companion animal biology.

During 2001, an investigation was initiated because of an outbreak of diarrheal disease and death involving young puppies at a Greyhound breeding facility that fed dogs a diet containing raw meat. Salmonella enterica was recovered from 66% of all fecal, food, and environmental samples and 93% of all fecal samples. Genetic analysis of isolates indicated that multiple strains of Salmonella enterica serotype Newport were circulating at the premises, but that many of the isolates likely had a common source. Findings link Salmonella enterica infection and clinical salmonellosis to the feeding of a raw meat diet.

Little is known regarding the frequency of tongue lesions of dogs and host factors associated with their occurrence. A review of 1,196 tongue biopsy specimens indicated that tongue lesions in dogs predominately consist of neoplasia (54%) and glossitis (33%). Most lingual neoplasms were malignant, with the most common neoplasms being melanoma, squamous cell carcinoma, squamous papilloma, plasma cell tumor, granular cell tumor, hemangiosarcoma, and fibrosarcoma. Lingual masses in large-breed or aged dogs were more likely to be malignant than benign or inflammatory.

Predispositions and risk factors for pasture-associated laminitis in ponies

Pasture-associated laminitis in ponies has been compared with metabolic syndromes in humans, but no data have been collected to support this conclusion. Comparison of 54 ponies with and 106 ponies without a history of laminitis revealed that it was possible to develop a set of specific metabolic and physical criteria that can be used to identify ponies predisposed to laminitis. In addition, pedigree analysis suggested a genetic link to a predisposition for laminitis, with pasture and nutrition playing important roles in the development of the condition. 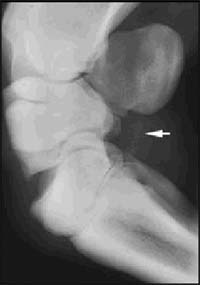 Increasingly, bovine viral diarrhea virus vaccines are being used to prevent fetal BVDV infection and birth of persistently infected calves. A study was undertaken to assess the efficacy of modified-live virus vaccines containing either type 1 BVDV or types 1 and 2 BVDV in protecting heifers and their offspring against infection with heterologous noncytopathic type 2 BVDV during gestation. The incidence of persistent BVDV infection in calves was lower when dams were inoculated with 1 dose of a type 1–type 2 BVDV vaccine than when dams were inoculated with 1 or 2 doses of a type 1 BVDV vaccine.

An ITS that functions as an inert physical barrier, preventing penetration of bacteria from the environment into the udder, has recently been introduced to the market. However, little is known about the effect, if any, use of an ITS will have on incidence of new intramammary infections during the nonlactating period in dairy cattle. Results of a controlled clinical trial involving 939 Holstein-Friesian dairy cows from 16 herds suggest that for dairy cattle with an IMI late in the lactation period, intramammary administration of cloxacillin at the end of lactation followed by insertion of an ITS enhanced protection against development of new IMIs, compared with use of cloxacillin alone.